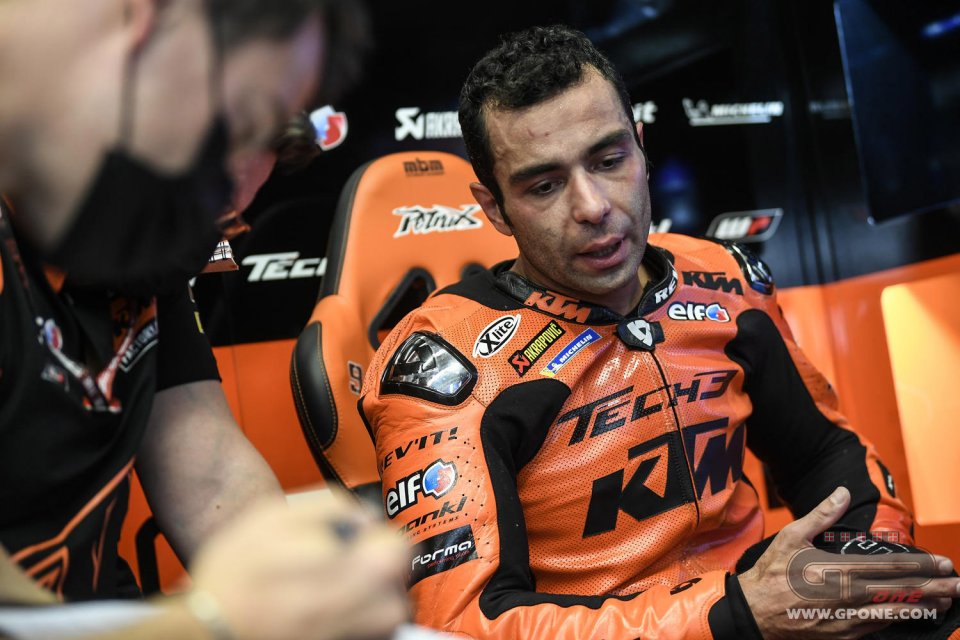 Danilo Petrucci knows he doesn’t have much time to earn his confirmation in KTM for 2022. Pit Beirer has been clear about this, confirming that now it is only up to the rider to demonstrate his potential. He has received the same chassis as Oliveira and Binder and as far as we could see in Germany today, he made a clear step forward. In fact, Danilo was in 11th position at the end of the day, just missing out on going through directly into Q2. It was certainly a positive day and Petrucci also revealed who helped him make it possible.

"It's a series of small things that allow me to go faster, not just the chassis - said Petrucci - The track certainly helps, there are no straights where I usually lose a lot. I didn't do a perfect lap with the soft tyres, I am much happier with what I did in race setup. I am also working a lot on some indications that Pedrosa gave me in the Barcelona tests. He sent me some photos to show me some mistakes I was making, he told me in his opinion what I should do on the bike in some situations and I'm trying. I can do it in several corners, in others I still have to work on it. The fact is that there are many small things put together to make a better result ".

Pit Beirer confirmed that he wants to wait for you before deciding. Now you have the material to express yourself to the fullest.

"In the second session I felt for the first time a bike that I really like. I'm happy that Beirer says this, because in KTM they focused on me at the beginning of 2020. They care a lot about me. I put more pressure on myself, while they are giving me time and this makes me happy. They are waiting for me to be in a position to be competitive. We are succeeding with small things and it is fine. I do not know how fast I can be in Austria, it has always been a problem for me. These two tracks, on the other hand, are favourable and I want to give them the opportunity to see that I am competitive and also to thank them for the fact that they are waiting for me and are putting me in a position to be fast ".

How do you define your Friday?

"I am happy about the day, especially for the second session. I was consistently in the top ten, even though I finished just outside the ten. Especially with the medium tyre at the start of the session I was really happy. For the first time in this season I felt the bike really competitive, I liked it and I felt it mine for the first time. We made some changes this morning and then the new chassis also helps. There are no huge differences you can feel, but the times are always better. So that's okay, now we have to put together the best package and maybe tomorrow morning it will be possible to get through directly into Q2. It would be a great result because this year that’s the key to having a good race."

Is your relationship with the RC16 improving?

"I'm getting used to the bike and as I always say, it's a little too small for me. But there isn’t a lot of hard braking here, so I tried to go in a slightly different direction and found more confidence with the front of my KTM. From the first laps of FP2 I felt on a different bike, I was fast right away with the mediums that we will then maybe use in the race, but I think so. It's the first day of this season in which I feel really optimistic. "

How are you doing with the tyres? Are you afraid of excessive wear in the race?

"The new rear construction penalizes me, because it is softer than in the past and does not support my weight. But here we have a harder compound because of the track configuration. This helps me a lot, in all situations. In the end I think I have a good opportunity for the race ".

Do you really feel more convinced of your potential here?

"I knew I would suffer at Mugello and Barcelona. I hoped it would be colder here, but there is Malaysian heat. But this has made sure that there is less grip and I manage the bike well in these situations. I’m convinced of what I have, I want to do two good races before going on a break. I want to be competitive to decide whether or not to go on. Here and Assen are two good chances for me and I am living it with a lot of conviction. "

Rea: "The tires dropped, but I did not feel Scott was destroying us lap-by...