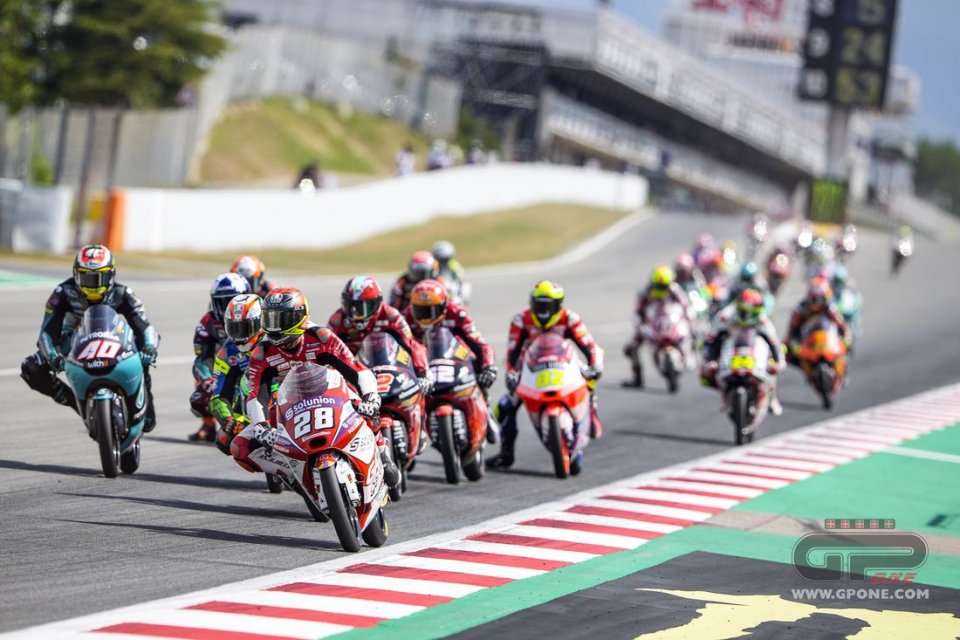 Things in the Moto3 have to change… and quickly. What happened during the race in Barcelona was shameful, with riders changing their trajectories several times on the straight and others suddenly slowing down, repeatedly causing dangerous situations. It’s time to say 'enough', as the MotoGP riders also declared, so Dorna and IRTA called two meetings in which they first spoke with the riders and then with the team managers.

Dorna’s chief sporting officer, Carlos Ezpeleta, explained the situation: “We’ve constantly tried to make the riders understand the risks they take on the track but, unfortunately, we saw a race that was riskier than it should have been, due to the behavior of the riders. We had a meeting with them at the end, during which we told them it’s not acceptable for them to turn off the throttle or cut trajectories, and we did the same with the team managers here at the Sachsenring, in order to try to minimize the dangers. If things don’t change, they’ll be penalized.”

Even IRTA’s president, Hervé Poncharal, agrees that a crackdown is needed: “We like to race, we like battles, but safety must always be first and foremost. The Moto3 is the most exciting class, but also the one with the closest and very competitive riders. You have to educate them, explain to them that they can only reach a certain point. We’ve already introduced penalties for certain types of behavior in free practice and qualifying, and the situation has improved. The Barcelona race was crazy, and we didn’t like what we saw. It was dangerous. There were laps in which some riders slowed down by even a second and, when those behind arrived, they risked crashing into them. During this meeting, Carmelo Ezpeleta, Carlos Ezpeleta, and Mike Trimby explained their view of things, without giving specific rules, but telling them that they cannot zigzag and slow down. They have to behave like sportsmen and not play dirty. It’ll be up to the team managers to explain how their riders have to ride and, of course, Race Direction will impose severe penalties in case of unsportsmanlike or unfair behavior. I’m sure it’ll be difficult for riders to change. There will be penalties, but then things will improve.”

China assails the Moto3: QJMotor with Esponsorama Avintia in 2022

CFMOTO presents its Moto3, Artigas and Tatay will be the riders

Dani Holgado underwent surgery after an injury during training

O'Halloran: "The disappointment over the lost BSB title almost broke...

Sepang: Pirro remembers Simoncelli and warms for the tests