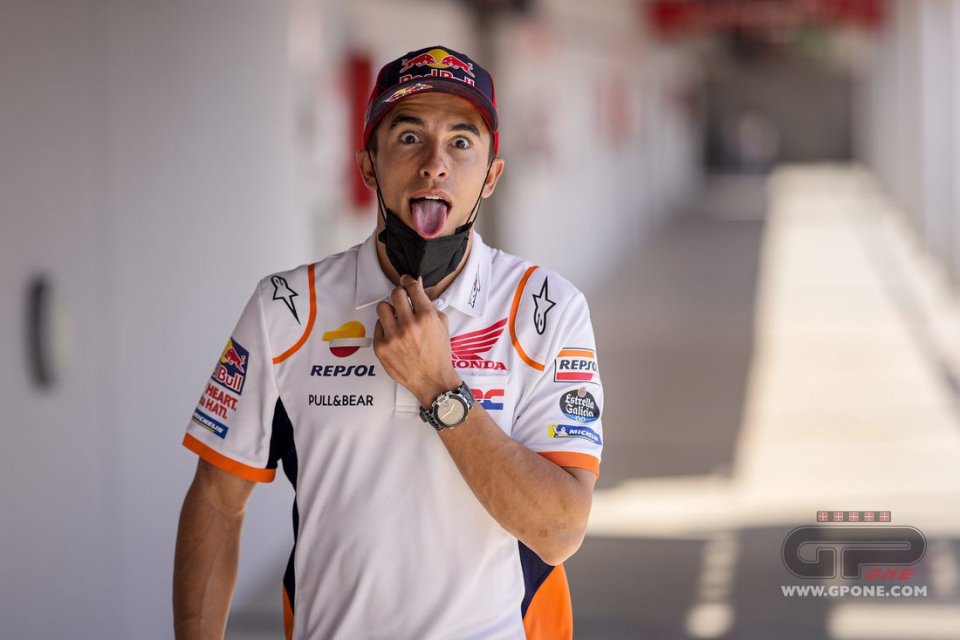 The question that everyone is asking on the eve of the German GP is whether Marquez’s and Honda’s leadership at the Sachsenring is destined to end. Marc has been winning on the Saxon toboggan since 2010, as has HRC. But, this time, they both arrived with problems: physical for the rider, technical for the bike. It’s likewise true that the German circuit is so special that it might hold some surprises. And Marquez is the first to think that.

“This could be the first track where I may have no physical limitations, or at least they’ll be minimal,” he said confidently. “Because there are only three right turns, the ones I suffer in, and only one change of direction at high speed. Of course, I can’t think of coming here and completely changing my situation, but I’ll be able to see what my level really is.”

Yours, but also Honda’s.
“I always try to assess the situation. I had already struggled last year, and now even more. The truth is that, right now, I’m not helping the bike, and the bike isn’t helping me. You have to try to improve, in order to get good results. I’ll try to do it on my side, and I know that HRC is doing it on they’re side. The goal is to raise our level, in order to finish the season well and start 2022 competitively.”

Are you missing a tester like Pedrosa?
“The test team is working well, and Bradl is very fast, but the rivals have improved, and we have to follow them. The particular situation last year also had an influence. When you have one or two fast riders, it’s easier to follow one direction for the engineers. Instead, they had a rookie, and Crutchlow wasn’t in his best season, so there was a lack of data. We’re paying for that.”

Were you able to get things sorted during the Barcelona tests?
“That day was very important for Honda but especially for me. I think it’s the best thing that has happened to me in the last two weeks. For the first time since my return, I was able to ride without pressure, without looking at the times, and I was able to test many things. During the two days after that, I was  exhausted, but I was already able to train well on Friday on the flat track bike. That means that my body is improving.”

So are you arriving at the Sachsenring at the right time?
“I’d like to get there in a better condition, being able to attack. However, I’m already decreasing the antibiotics, and my condition is improving.”