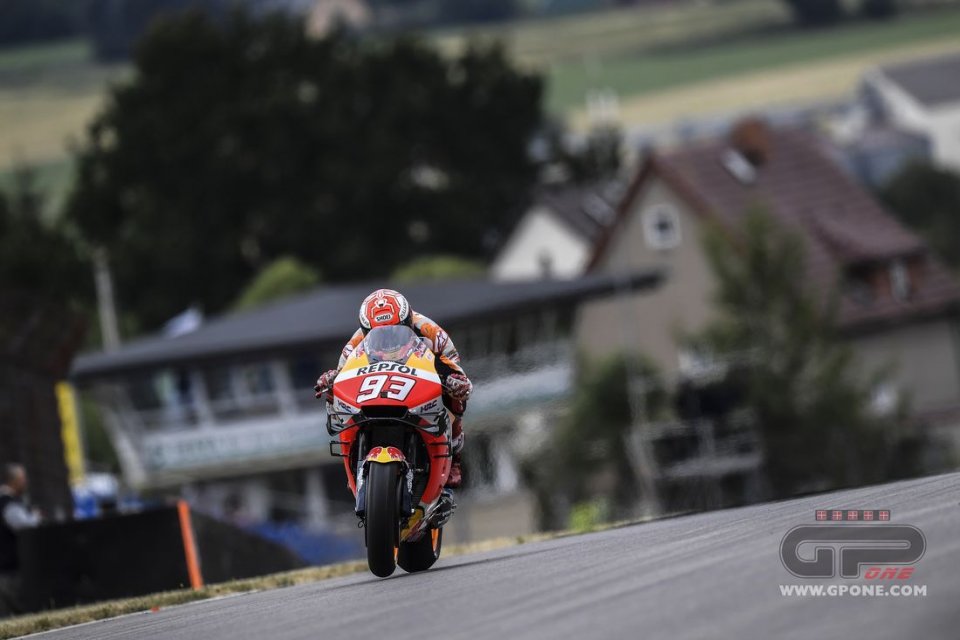 In a normal year, we would already be sifting through the vocabulary to find new adjectives in anticipation of the celebration of yet another victory by Marquez at the Sachsenring. This, however, is not a normal year, neither for Marc nor for Honda. Let's take a step back, to 2010, when the (still) budding champion raced in 125 and for the first time conquered the German track. The first victory in Saxony, which would become his stronghold. Since that year, Marquez has never stopped: in 2011 he moved to Moto2 and continued to win at Sachsenring, then he did the same when he moved up into MotoGP in 2013. From 2010 to 2019 (last year there was no race in Germany) no one has ever managed to beat him on that track, which means a streak of 10 uninterrupted wins.

But that is the past, what does the present say? Marc is certainly not leaving for Germany as a favourite. The Honda rider comes off the back of three zeros, caused by as many crashes, in the last GPs. The reason is his physical condition, still far from perfect after the long stop and the operations he has had. Let me be clear, Marquez has shown that he has not lost one iota of his predatory instinct, he always tries, even at the cost of making a mistake, but his body has not yet seemed able to withstand the stress of a complete race.

On the flying lap (perhaps even with the help of some much debated tow) Marc manages to plaster up the situation, but the prolonged effort of a race has put him (so far) on the ropes. He was himself the first to know that his return would be difficult, but patience is not a virtue of champions and, logically, he could not resist the temptation to speed things up as much as possible. A venial sin, one that did not pay...

Last week, however, in the Monday tests at Barcelona, ​​Marquez really wanted to put himself to the test. In one day he completed 87 laps on the RC213V and it was more of a test for his physique than for the bike. Probably now he knows his limits better and the abundant week off has allowed him to regain his strength in view of his talisman track.

So far we have only talked about the rider, but an important part of the equation is still missing: the bike. Because it is not only Marc who likes Sachsenring, but also Honda, which before Marquez's seven straight wins had scored another three with Pedrosa. Since, it is said, problems never come on their own, the RC213V seems to be at an all-time low in competitiveness in recent years. Nobody is hiding behind a finger now, Alberto Puig has clearly stated that the bike has a problem and Pol Espargarò has even declared that being under concessions next year would help a lot.

It is also a fact that the Honda was created in the image and likeness of Marquez, an extreme bike that requires an extreme riding style. Exactly what Marc is unable to use due to his physical limitations.

The question is: will a friendly track be enough to resurrect the Marquez-Honda duo? There would be no rush, the championship is now gone and the long summer break will be the best ally for the Spaniard, but a good result would be an oasis in the desert, waiting for better times. We would then have to see what is meant by 'good result': a podium or even a victory? Perhaps no one knows, not even Marc, but if there is the right place to amaze then that is the Sachsenring. A precious amulet at this time.