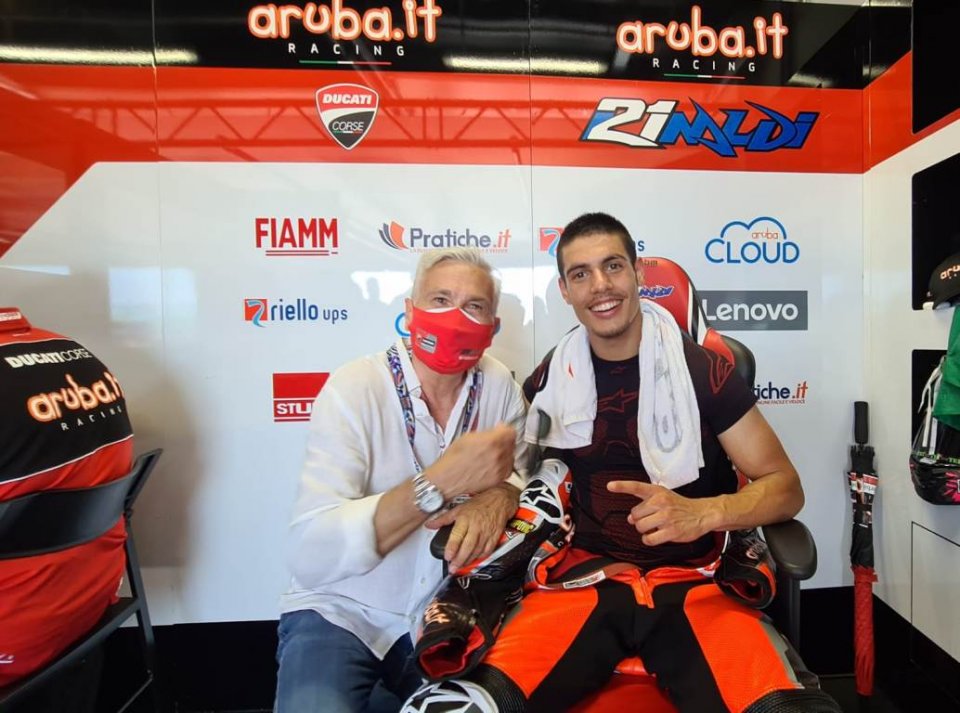 Gigi Dall’Igna was there Friday, Claudio Domenicali yesterday, and Davide Tardozzi today. The former rider was invited by Dorna and FIM for the 30th anniversary of the derivatives on the Riviera. Davide dropped by the circuit with his son this morning.

He met with Stefano Cecconi, then he spent a few minutes with Michael Rinaldi in Aruba’s hospitality: “Way to go, Michael. My compliments, really.” “Thanks, Davide,” the rider replied. “The problem is that the Turk is scary. If I break away like him, I’ll end up in the fields,” he said smiling.

The team manager then chatted with us for a few minutes.
“It’s always nice to come here to Misano and see all these riders in action,” he said. “In my days, the paddock was different but, in the end, everything evolves, and I think it’s well managed today. It’ll no longer be what it was twenty years ago, but it has grown for the better and improved.”

Davide, how do you judge this Ducati V4, which yesterday won on the Riviera ciruit?
“The idea of the V4 is that of a motorcycle born to win, which has positive and negative characteristics, as all motorcycles do. Certainly, here at Misano, Michael and the Reds showed great potential. In this regard, Dall’Igna received input from Domenicali to win the Championship and, consequently, this is the goal to achieve.”

During the last two years, there’s been a lot of talk about the MotoGP philosophy in the SBK, often appreciated, sometimes criticized.
“Ducati makes bikes of a certain type and, consequently, our philosophy is to bring the maximum of technology and innovation to the MotoGP, then transfer it to the Superbike, and then to the production bike. That’s what we do today. Sometimes we’re criticized for this but, in the end, Ducati’s philosophy is this, and the process is inevitable. In fact, we want to give the end user the best technology.”

An inevitable process.
“Of course, this process means performance, but also safety, with all the precautions aimed at protection. In fact, I’d like to reiterate the concept of safety, given that we’re often focused on performance.”

In the event of eight bikes in the GP next year, isn’t there a risk that the SBK will suffer from this commitment?
“No way, no! The Superbike budget is the Superbike’s, so much so that Claudio and Gigi want to win at all costs in this Championship, and the resources will not decrease. This I can assure you. There won't be nochanges, regardless of what happens or not in the other paddock.”

Speaking of riders, in the MotoGP, you focused on the green line, and you’re following the same direction here too. Is this the deal-breaker?

"We need to find young riders who can perform in the best way possible, in order to beat Johnny. He’s a great rider and, to beat him, we have to find someone who can make a qualitative leap. If you keep taking on riders who have never beaten him in the past, it’s complicated, That’s precisely why’re following a specific direction.”

And, again, speaking of riders. Petrucci is waiting for answers from KTM. If so, would there be room for him in the SBK?
“I wish Danilo will stay in KTM.”

Let's talk about Rea. Who does he remind you of?
“Remember all the great champions of this specialty. His talent is beyond question. We know him well, and the World Championships won are proof of this. I’m of the opinion that Rea, in the MotoGP, can remain in the top ten in the race.”