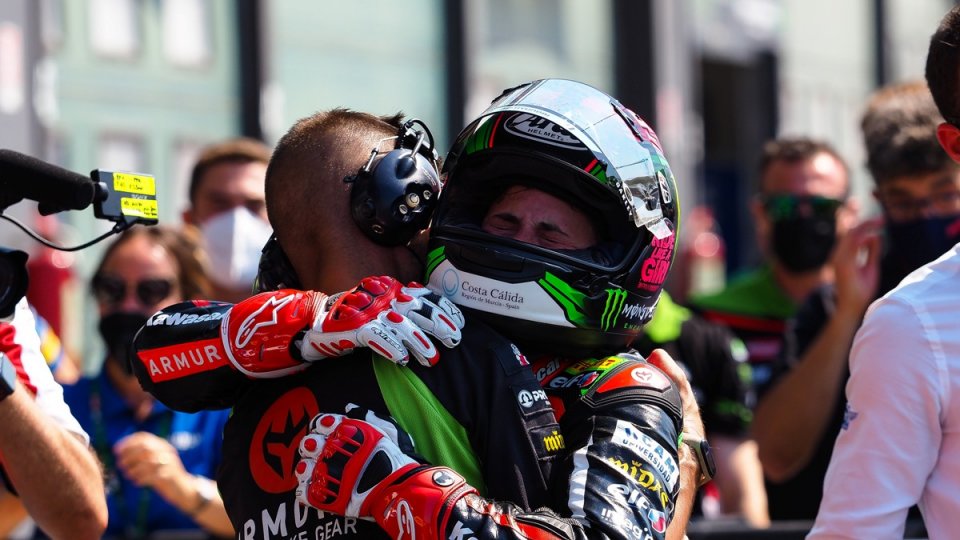 It was last September when Ana Carrasco was the victim of a very bad accident during tests at the Autodromo do Estoril, picking up a serious back injury with the fracture of the D4 and D6 vertebrae. Despite the surgical operation to fix the plates and once the long rehabilitation had begun, the talented rider from Murcia did not lose heart, presenting herself at the start of the current World SuperSport 300 season on the Ninja 400 of the Kawasaki Provec Team, a demonstration of the strength and stubbornness that distinguish her.

In Misano we found her again on the top step of the podium, scoring that long-awaited triumph. It was a victory that repays her for everything she had to suffer in these long nine months, and brings here out of the tunnel. And so now she’s smiling on the top step of the podium with tears streaming down her face: "I am very happy since the path to get here was very long" acknowledged the Kawasaki Provec team rider after the podium celebrations. “I spent several months away from racing and the return was complicated. So I couldn't be happier: for this result, for the fact of being competitive again and having won a race. Winning here at Misano is undoubtedly very important for me and also in terms of the Championship it is excellent to be able to do it in the fourth race of the season. I am very happy, I thank my team, Kawasaki, the sponsors and my family as they supported me in difficult times and pushed me to be here today ”.

Once again Anna has been able to establish herself in a category where she has been the Top Gun and she aims to return to that position.

“The level of the championship is really high, so it's not easy to fight after months of absence. In any case, every time I go out I have increasingly positive sensations on the bike – she said - despite not having obtained any podiums in this start of 2021, I have shown that I am fast enough, in fact I finished the previous race in fifth position, while yesterday at a certain point I set the new Misano record. If I find myself on my own I am comfortable, but I still have to get back the automatisms when fighting in a group where I struggle more than expected ”.

The 24-year-old's performances are encouraging, but her physical condition (obviously) is not the same as the one that allowed her to pick up seven victories, five podiums and three career pole positions in the light class of the production-based series. Her scars remain and are evident, but her recovery came about in record time. In the space of one month, she went from removing the plates to returning to the track in Barcelona testing.

“I'm not at my best, I'm not as strong as I would like. The accident was serious, it takes time to get back into ideal shape. I was going through turn 3 and pushing hard - she explained - unfortunately, I crashed and ended up against the guardrails. A silly crash in hindsight, but one that caused me a lot of problems (laughs). Because of the head injury, I only remember when they took me to the hospital. At first, my movements were limited, then I started walking again and, thanks to the help of my personal trainer, we thought 'step by step' until we got back on the bike last February".

Considered to all intents and purposes one of the “top guns” of SS300, the Spaniard immediately focused on preparation for 2021. Risks, after all, are part of the job of a racer.

“Sometimes these episodes leave some aftermath, but in motorcycling it can happen. Luckily for me, all of this happened in the final part of 2020, so I had the time to prepare for the current season. In any case, I never thought about quitting. I stayed focused on my goal through the support of the family and team. Now my intention is to score a top-3 finish as soon as possible, be competitive and fight for the title like in the recent past ”.

After marking a chapter in history with the title achieved in 2018, as well as the first-ever woman to win a world competition race, lately she is witnessing the exponential growth of the so-called "pink movement". The birth of the Women's European Cup is a confirmation of this.

“Nowadays in the world of two wheels it takes a lot of money, so I consider it a really great idea that allows young girls to take their first steps and follow their passion by virtue of the fairly inexpensive entry fee. It must represent a springboard, but the most important thing is to support those who take part even when they try to make the jump into the international stage”, she concluded.

Marquez says he “answered all of Dr. Chartre's questions” after the crash