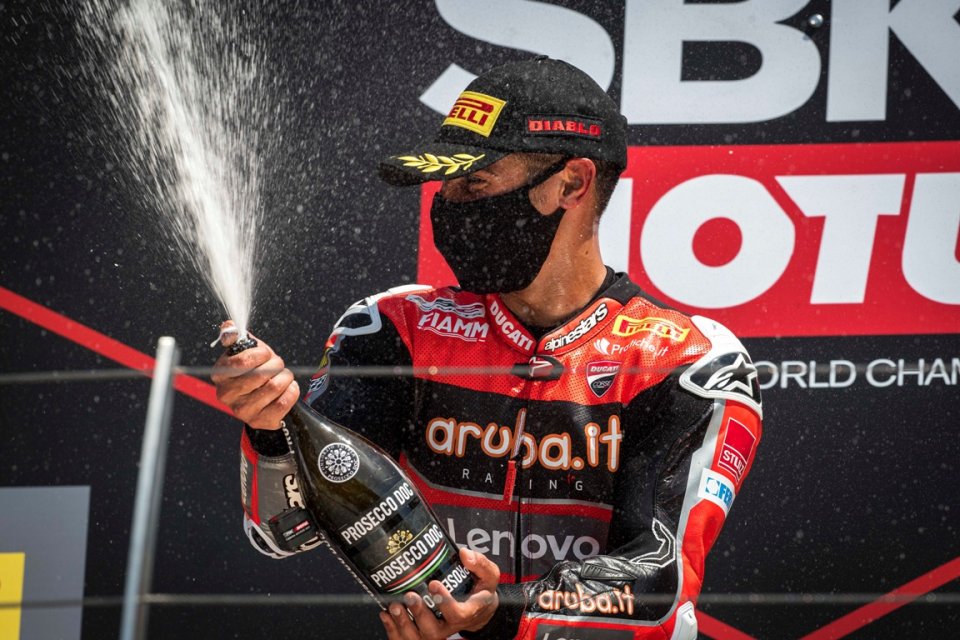 Race 2 could have been an opportunity to play a trump card after this morning’s success, but Michael Rinaldi unfortunately had to settle, since Toprak Razgatlioglu, who reached his first seasonal success on the Riviera track, spoiled the party.

Despite a second place, the Aruba rider should be satisfied with what he did before his home crowd.

“I didn’t win race two, but I gave it my all,” he began. “The fact is that the temperatures today were higher than yesterday. I had a different confidence with the bike and more risks to take. I tried to use Saturday’s strategy, but I had Toprak near me, and he kept up with me throughout the race, deserving the victory.”

So the Turkish rider prevailed in Romagna.

“I tried to stay as close to him as possible, but I risked falling several times. In the end, however, the outcome was positive, given that we were competitive without changing much compared to Saturday. But the tire behaved slightly different than yesterday and, unfortunately, I didn’t have that flair in the end to fill the gap with Razgatlioglu.”

This weekend for Michael was one to be remembered, and the messages of esteem and affection proved it.

“I received so many messages, and I spent almost an hour and a half answering. So much so that, at a certain point, I dropped the phone,” he said smiling. "When you win, it’s always special and, doing it here, even more.”

His friend, Axel Bassani, also demonstrated his competitiveness on the Riviera track with the Ducati V4.

“Axel impressed me, since he struggled in the SSP last year. Many didn’t believe in him, but he’s definitely a very talented guy, and this track has helped his qualities and the bike to express itself at its best. I'm happy for him.”

Too bad his friend Dovizioso wasn't there to watch him.

“Due to COVID protocol, Dovi was unable to  make it. He wrote to me on Friday telling me he was going to motorcross, since I was already first in free practice. Knowing that he's afraid of snakes, I replied, 'Next time I'm putting a snake in your tank'," he said smiling.

Misano welcomed Michael with a second place in a Race 2 which exalted Toprak's qualities.

“Toprak was stronger than me in braking today, and we have to work on this for the future. There are indeed some aspects to improve, without obviously losing progress. The next race will be at Donington, a complicated track where it'll be tough. However, it's interesting to come up against Razgatlioglu. Toprak and I were immature before, Now we've matured. There's respect, and this challenge that has lasted since the 600 has allowed us to improve. Honestly, I don't know if we're facing a generational change or not, since we first have to beat Johnny.”