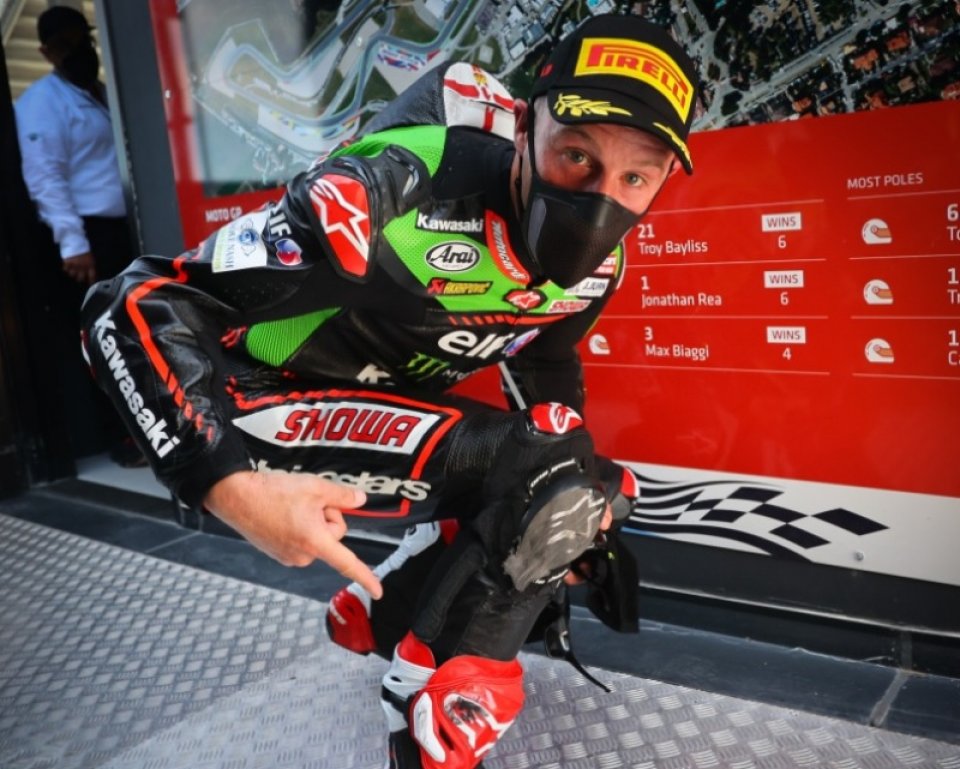 Between saves and risks of falling, Johnny Rea is, as always, a certainty. The Kawasaki ace may not have won at Misano, but he certainly limited the damage as best he could, finishing on the lowest step of the podium. Certainly, that Marquez-like number in the middle of the race captured much of the spotlight of Race 1, leaving everyone speechless.

This is where the Cannibal’s analysis begins.
“To tell the truth, I was luckier than good,” Johnny began. “This time, I took a big risk, since I was unbalanced off the bike. I did a dirt track maneuver with an elbow and boot to avoid falling. I also said to myself, ‘I’m falling, I’m falling, brake, brake.’ In the end, I managed not to. Then I got back on track and finished the race.”

During the race, Johnny tried to keep Michael’s pace, but wasn’t able to.
“I think I cooked the front tire behind Rinaldi. Today I used the new front tire, since I had positive feedback between tests and qualifying. When braking, I’m confident, but you need to have more performance for the end of the race. I think I asked too much from the tires today, even if the gap wasn’t bad when I returned.”

On the day Rinaldi won, Rea congratulated him.
“Michael did a great job and deserved the win. He started strong, attacking immediately at the first corner, even if I tried to resist. I tried to stay attached to him. I felt strong in the fast sections but, in others, I lost and had to chase. I certainly learned a lot in this race, and the goal for tomorrow is to progress. We have to remember that I was starting this weekend after a complicated Friday, since I lost a lot of time in free practice. However, it was positive and, like I said, tomorrow I’ll try to fill today’s gap.”

In all of this, Redding didn’t make the podium.
“You reports always ask me about Redding, but the second rider in the standings is Toprak, and today Rinaldi destroyed all of us with this victory. Continuing to ask me about Scott isn't very respectful towards other riders. In the end, the thing that matters most of all is being on the podium, and I think I got help from above.”