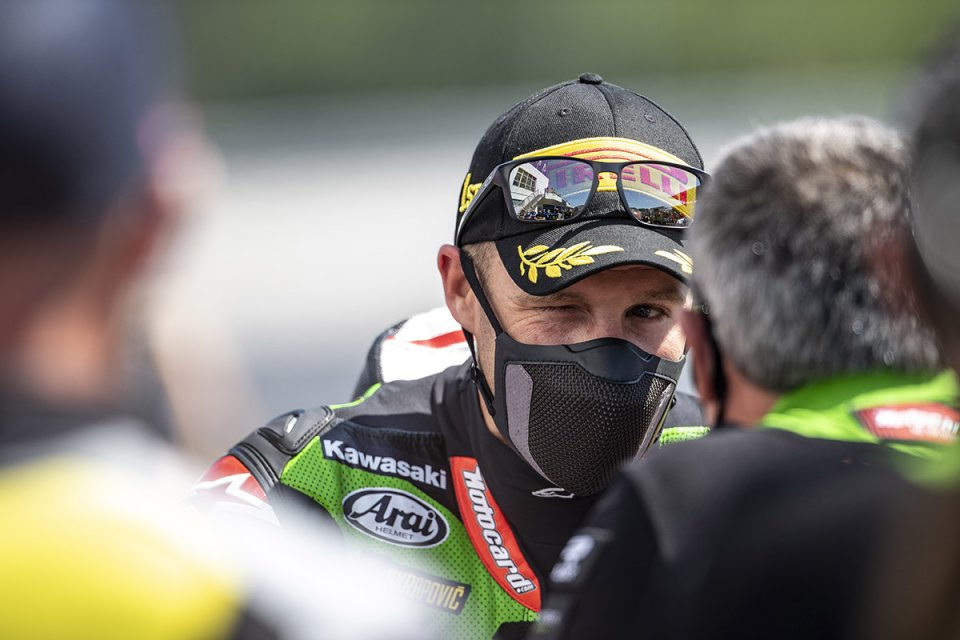 Jonathan Rea ended the Misano weekend with a third place in Race 2 which at least allowed him to contain the rise of Toprak Ratzatlioglu, who is making up the points and is now -20 from the Kawasaki rider in the overall standings. Rea had to use all his experience to get through the round on the circuit named after Marco Simoncelli, a track that does not seem to enhance the characteristics of his Ninja.

The world champion did not make a big thing of it however, because in all three races he did manage to come home ahead of Scott Redding, his main rival for the title, even though the Brit has now slipped to third in the standings behind Toprak Razgatlioglu after today’s races.

Here the SBKs lapped in very similar times to the MotoGP bikes, but Jonathan Rea declined to comment on these performances in detail.

"I don't want to talk about MotoGP and comparison in performance. For sure here the SBKs make a good impression compared to the MotoGPs."

About his race, Rea had this to say.

"I was lacking a bit of stability. I had to sacrifice a bit of agility to try to improve in this area with the set-up. Toprak had a great pace, but I wanted to fight to stay with him. I tried to stay with Rinaldi, but when he put in sixth towards the Curvone I had no chance to pass him. I had to hope that he would make some mistake to be able to pass him, but he didn’t. I have nothing to complain about today, I was in the middle of a hell of a fight. What I did notice is that when the others make a few small mistakes, they still manage to do good lap times. If I make a mistake on the other hand, I suffer a lot more in my lap time. I have to try to stay fluid all the time. and make the most of our fluidity, the characteristic of our bike ".

Did you ever think you could go for the win?

"I was close, but the last 3 or 4 laps I thought I'd avoid the risks and accept my position. I took a small ganble with the bike, and it was a decision that gave us some small advantages luckily. I think I made a right choice, but what I made up in the low gears, I lost in the fastest parts of the track. I was losing something at the Curvone, so to stay with the top guys I had to go all-out on every lap. Sometimes I even went off the perfect line, but at least I think I got the most out of the potential of the bike. I wanted this result and looking at my weekend I am very satisfied, I kept a pace worthy of my qualifying. I’m still in the fight, now I can’t wait to go to Donington and I'll be happy to go there after being on the podium three times. "

What do you think you were missing to be able to win?

"I think the thing we really lacked this weekend was speed in the changes of direction. The Ninja is heavy there and it happens in different places on the track. When I tried to be more aggressive in these phases the bike started to move around too much making me lose time in acceleration. Our bike has a lot of grip on the shoulder, but we have to work better in terms of agility. At least Donington is a more suitable track for us, where you need to be very fluid. The first two sectors are very 'Kawasaki', I think we will be strong there. But the two guys on the podium today have also made some steps forward and they will be there. "

Is it difficult for you to accept not winning in a weekend?

"I have to accept it when we have weekends like this. These are races where it's all about limiting the damage for the championship, trying to score as many points as possible and I think I did that today. I was also lucky yesterday not to crash, so that's okay."

Your rivals are starting to be a lot younger than you. How do you manage to live with this?

"I'm happy to fight against these young riders, I find it cool. I have a lot of experience, but it's nice to see how much the guys who come from 300 SSP and even 600 SSP are improving. From there, there will always be new and stronger riders, for me today Manu Gonzales was impressive, a very fast young rider. He deserves to be here. Toprak is also very young, but he certainly deserves to be on the top step of the podium because he's talented. "