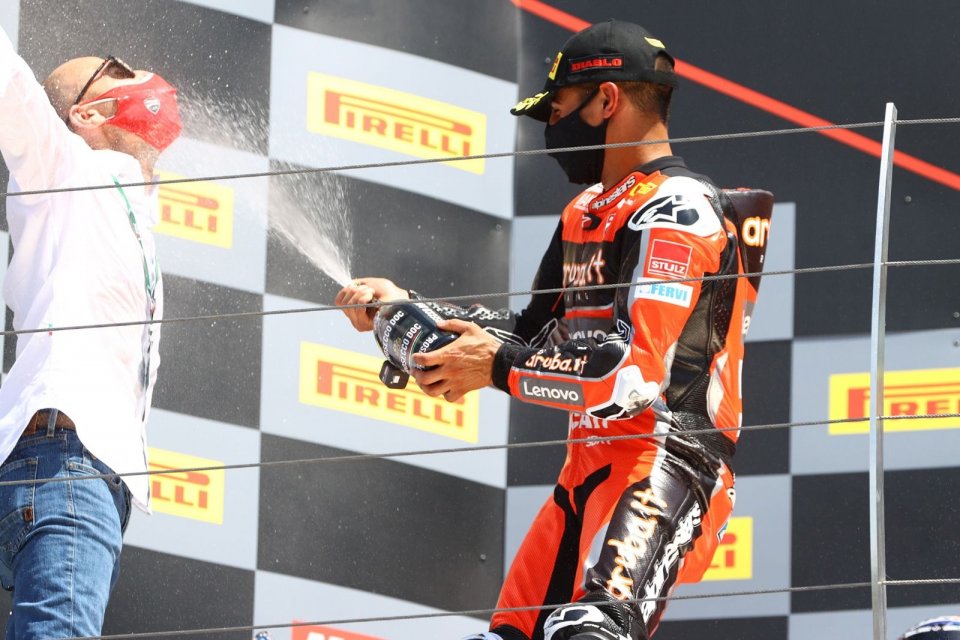 Before today, Michael Ruben Rinaldi’s last success coincided with the number one of his career in the World Superbike last year at Alcaniz in the ranks of Team Go Eleven. After he transferred to the official Aruba.it Racing-Ducati in the winter, and a start to 2021 that wasn’t exactly favorable, with only 25 points achieved in four rounds, the rider from Romagna had to wait for his home track, the Misano World Circuit Marco Simoncelli, to (finally) concede to an encore at the end of an impeccable Race 1.

“A lot of time has passed since Aragon 2020, even if it has nothing to do with today,” he stated. “Luckily for me, Johnny made that little-big mistake which allowed me to calmly finish the final part of the race. I'm over the moon. I love this track. Winning in the home Grand Prix is fantastic, especially in the presence of fans.”

“It’s a completely different win than in Motorland. When you wear this suit, you have to win.  It’s definitely cool. Winning with an official suit has to represent normality. Among other things, on the return trip from Estoril, I told Rea’s electronic technician that I wanted to win with Johnny on the track! It was tough going against him but, inside, I just thought about pushing. I could have perhaps made a mistake, gotten behind, but what matters most is to look in the mirror with the awareness of having given it my all.”

Fresh from the accident with Garrett Gerloff in Estoril, the 25-year-old knows very well that “the devil is not always at one door” and you learn from your difficulties.

“You have to believe in your potential. This is the only way to increase self-esteem in races like today. In recent months, many people, including the media, have criticized me, but I don’t care about what they say, because the same thing also happened to riders of the caliber of Marquez and Rossi in the past. Since yesterday, I’ve focused exclusively on myself and on setting up the bike. From the beginning, I tried to set my pace to get to the last lap with a good margin of advantage over the group.”

In hoping that this affirmation could represent a decisive turning point for the season, during the hot afternoon on the Riviera, Johnny Rea’s Marquez-like rescue, which held center stage, lead to Rinaldi’s win.

“When you go fast, you sometimes make some mistakes, but Jonathan needs no introduction, so I’m not surprised at the successful rescue. Regardless of what happened, winning without him would not have been the same. Having him behind helped me stay focused, while I decided to manage the situation in the final laps and not make mistakes, given my four second margin on the pursuers.”