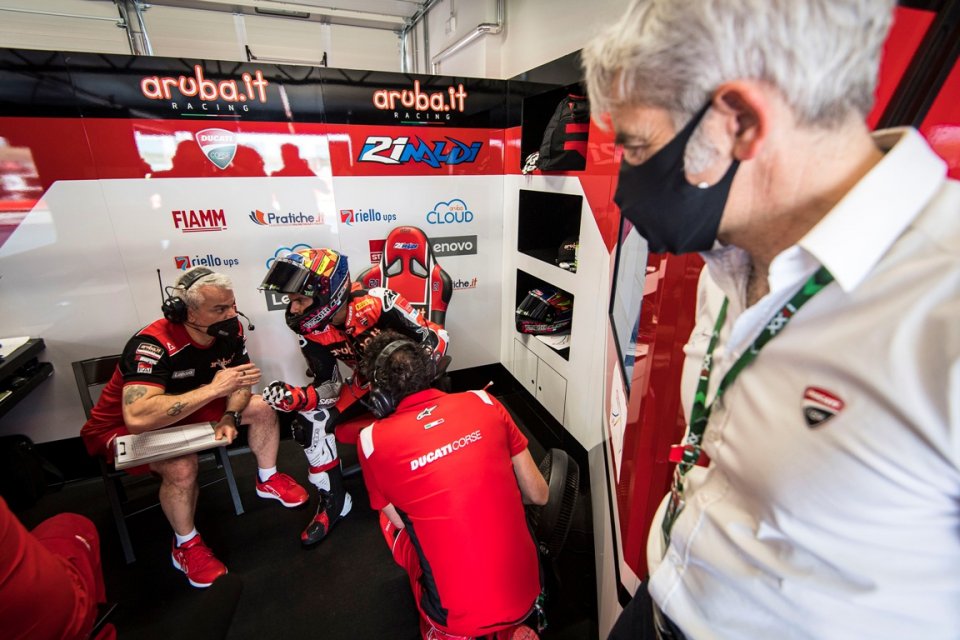 If there is one Ducati that stood out in the Misano afternoon, it’s the red one of Michael Rinaldi. On the Misano track, the Romagna rider asserted his superiority, so much so that he ended the free practice session with a flourish.

He couldn't have started his weekend better than that on a track that holds very few secrets for someone like him.

“Come on, this first day didn't go badly - he said - unfortunately this is only free practice. After a complicated start to the championship, today I found the right confidence on the track and managed to be fast. Here in Misano I wanted to work one step at a time, without being in a hurry. I felt a bit disappointed for this morning, as I wasn't able to ride the bike the way I wanted ”.

In fact, Michael had to find the right feeling with his Panigale.

“I was tired this morning and couldn't ride the way I wanted. But the team helped me by finding a good solution. In fact, in the afternoon I managed to be fast with race pace, experiencing the right sensations”.

Certainly in Misano the Aruba rider is starting to dream big and his optimism is legitimate.

“After free practice I can say that I am one of the fastest and can try to fight for the win. I am sure that Scott will also be able to score a win here at Misano, as will Rea and Toprak. We will therefore see what happens”.

“I saw Gigi, he came here to Misano and it was a pleasure to talk with him. He is a person who knows how to listen, and he also showed a lot of attention when I was talking to my crew chief. Obviously he can't be here in SBK with MotoGP, but today it was important to have him with us ”.

I understand there is a pact between the two of you…

“Today I was first and he told me he won't come back tomorrow, since according to Gigi I don't need him. However, we agreed that, should I struggle tomorrow, he would return on Sunday. At this point, however, I hope on Sunday he won’t come (he jokes) ”.

As mentioned, Rinaldi immediately showed a lot of confidence in free practice, also thanks to the work done in the tests.

“In the tests we did a different type of work, focusing on a different set-up. Here we started from another base and the sensations proved to be encouraging ".