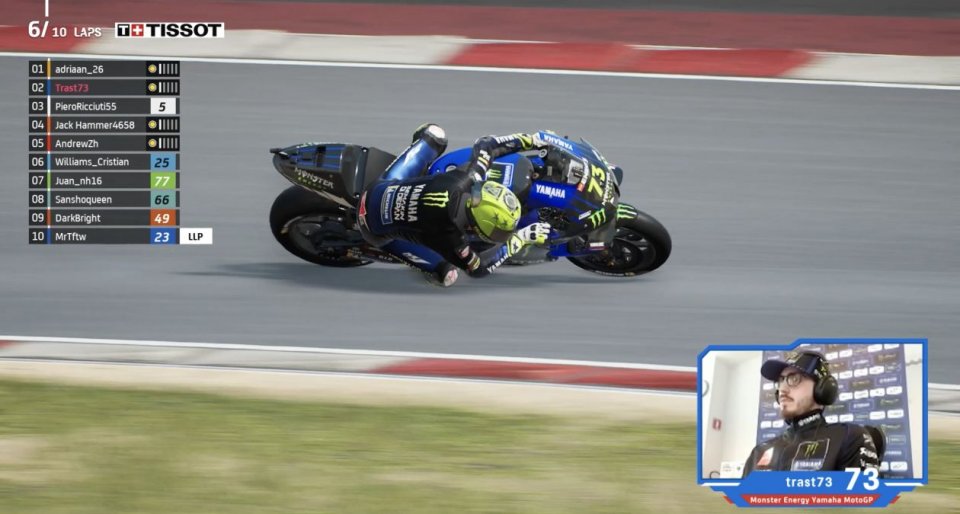 Today, Monster Energy Yamaha MotoGP‘s Lorenzo Daretti (aka 73Trast or Trastevere73) demonstrated once again that he will be a force to be reckoned with during the 2021 MotoGP eSport Global Series. The two-time MotoGP eSport Champion (in 2017 and 2018) started off the first round of the 2021 Global Series on the right note, securing a second and first place.

Similar to last year, as part of a Contingency Plan devised by MotoGP‘s and MotoGP eSport‘s governing body Dorna, the qualified eSport players competed in Round 1 from the comfort of their own homes. Though he had hoped to see some MotoGP fans cheering him on as an audience, Trastevere73 was still fired up and ready for action. He had qualified in third place for Race 1 (Portimão) and in second place for Race 2 (Mugello).

Portimão is known as ’the roller-coaster‘ and 73Trast‘s race there was also filled with ups and downs. His original tactic for Race 1 was to start from third and take the holeshot. He succeeded, but contact with another rider dropped him back to fifth place. However, the Yamaha man is not one to give up easily. He stuck with it, putting in one fast lap after another and soon climbed back up to second position behind Adriaan_26 (Repsol Honda Team). Daretti tried to reclaim the lead again but came just short and had to settle for the runner-up position.

Race 2 was a masterclass at Mugello by Daretti. He managed to secure second place on the grid and thanks to another phenomenal start he took the lead in Turn 1. The Yamaha rider stayed perfectly concentrated for the entire length of the race, keeping Adriaan_26 behind him. Having withstood the pressure, Daretti was proud to secure his first race win of the 2021 season.

Trastevere73‘s efforts in Race 1 and Race 2 earned him 45 solid points and a joint first place in the rankings for the 2021 MotoGP eSport Championship. 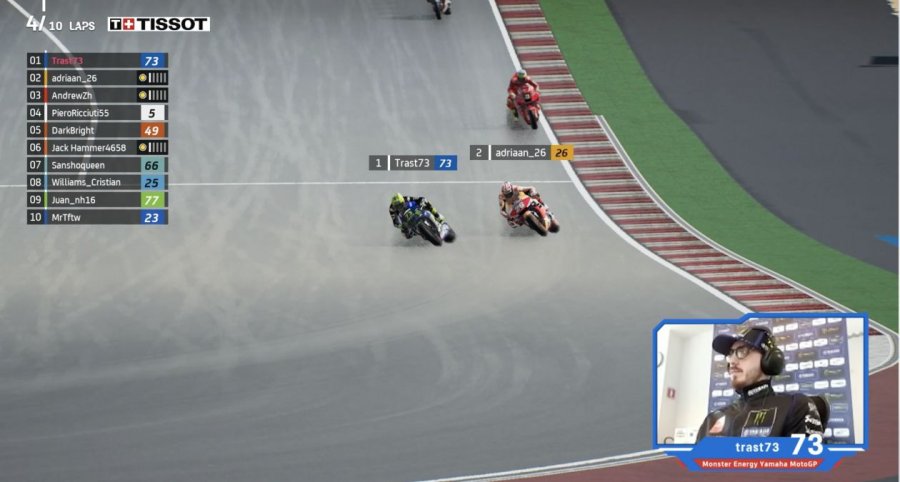 "This year‘s game is more realistic and difficult than ever. I really like how you can overtake in a realistic way in MotoGP21, making it more fun to watch for the fans and also more fun for us eRiders - said Daretti - This year, it's possible to use different strategies and different set-ups for all the tracks. The first race in Portimão was very nice with a lot of overtaking. I started from third position. After a fantastic start I was in first position, but then I got involved in a race contact and fell back to sixth or fifth. The key was to be calm and consistent. I did many clean laps without mistakes, and this gave me the opportunity to climb back up to second position. I tried to overtake Adrian but I couldn't. Still, the second position was an excellent start to the 2021 championship.

The second race at Mugello was flawless. I knew I could do really well, and I succeeded. I started from second position. After another fantastic start, I managed to be first in Turn 1, and I stayed first until the end of the race. It was a difficult and very long race, having Adrian less than a second behind me for the duration of it. I‘m very happy for myself and for the team! This is an important result for our morale.

That said, we shouldn‘t get too carried away. The Global Series is long. For sure, I will try to keep focused, finish all the races on the podium and, when at all possible, go for the win."