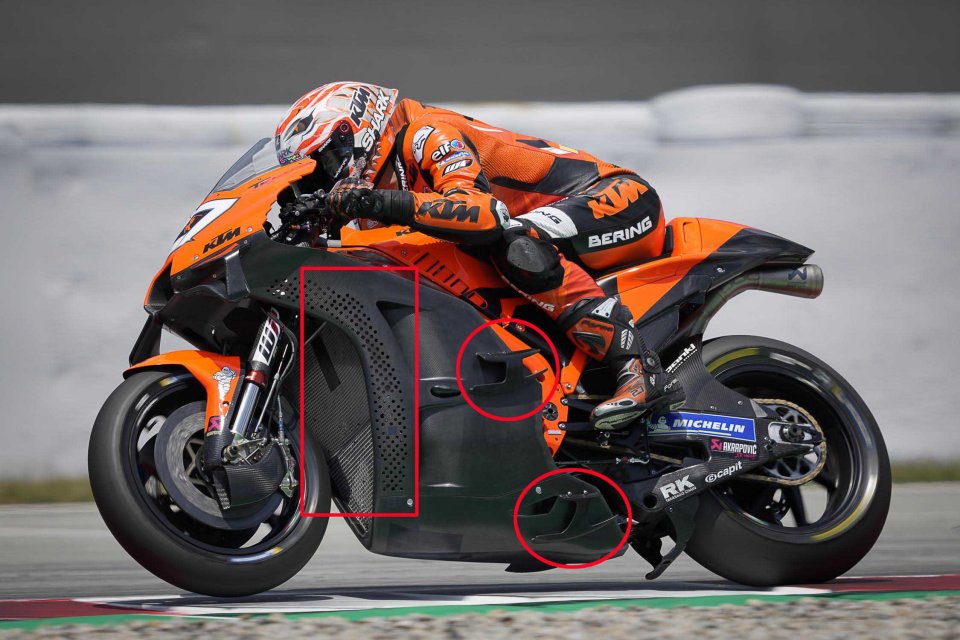 In jargon, it is said that the science of aerodynamics helps to 'cut through the air', that is, to offer as little resistance as possible.

Of course, the wind tunnel is also useful to find downforce, to keep the bikes and cars anchored to the ground and avoid as much as possible the opposite effect, lift, which instead tends to raise them up. That's what wings are for.

Further elements on this science that is becoming increasingly important also in motorcycling can be found in this article: Technique and Aerodynamics: the principles that influence performance and dynamics.

However, this premise only serves to show the latest devilry, brought to the track by KTM with Iker Lecuona in the last test in Barcelona.

As you can clearly see, the elements that characterize the KTM's aerodynamics are two: the small winglets at the rear of the same and the myriad of holes in the front, right at the point where the bike slices through the air.

Fairings with holes in them are nothing new in motorcycling: they have been used for decades on particularly windy circuits such as Phillip Island. The aim is simple: to offer less surface area to the wind and prevent gusts from moving the bike too much from the trajectory set by the rider.

In the case of the KTM, however, the ‘Swiss cheese’ fairing might have the purpose of generating instead micro-turbulence in the front area, thus improving the flow of air in the next area. By creating cleaner airflow to make the fins work in the best way, the purpose of which is to create lift in the central area of ​​the bike, perhaps to improve stability or mechanical grip.