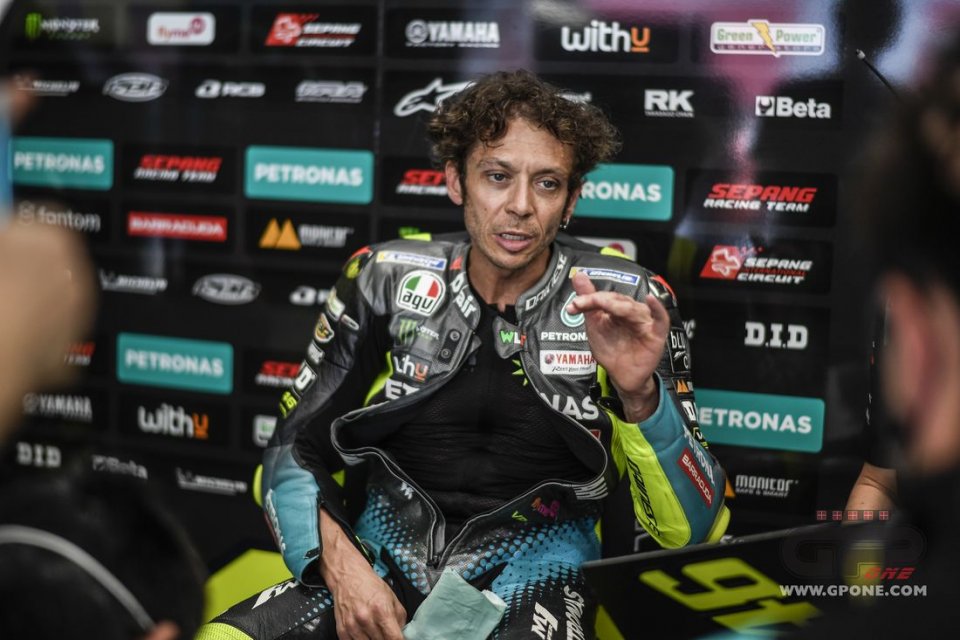 The day of testing in Barcelona just ended, and Valentino talked about how his tests went. Since yesterday, however, the controversies on the laxity of the Race Direction and Stewards Panel have not subsided, guilty of not having taken measures after the dangerous maneuvers of some riders in the Moto3 race, of not having stopped Quartararo with his suit unfastened, and then of penalizing him after hours. So, before asking Rossi about his work on the track, the questions are all about these topics.

“In my opinion, there’s always too much confusion,” he said. “ In these difficult situations, it’s never clear what will happen. Everything can change an hour or two after the race. The rules are not precise and, for many, in the end, it’s the Stewards who have to decide. So everything can change every time, depending on the riders involved and the category.”

Are they going over the limit in Moto3?
“Watching the Moto3 race is frightening. It’s getting too dangerous. I don’t enjoy it because I’m always with bated breath.”

Is there a solution? Cadalora told us that it’s essential to find one,  because those are the MotoGP riders of tomorrow.
“I agree with Luca. It’s not easy, but the first thing is to talk seriously with the riders, and not all together. You have to take those who do something wrong, one by one, and tell them clearly that, if it happens again, they’ll stay home. It seems to me that the Moto3 has become too much of a show. These races are exalted on social media. They write that they’re  incredible. In doing so, that pushes to make it even worse, and it doesn’t seem like the right choice to me. So there’s a lot of work to do. They have to look carefully at every image, talk to the riders. It’s tough, and not everyone is usually happy with having to work hard,” he said laughing.

Many argue that the Panel is never able to be timely in making decisions.
“It seems as if they’re more focused on the MotoGP. They should put more effort into the Moto3, but it's probably not important enough. Like I said, there’s always confusion. Sometimes things happen that I don’t understand, like when they called Zarco a week after an accident. Maybe it depends on when they have catch their plane on Sunday. If you have it at four, it becomes difficult to talk to the riders after the race,” he laughs. “These safety issues should be taken more seriously.”

Let’s talk about your test day.
“Yeah, it wasn’t too bad. I didn’t have a lot of new things to try. Just a tire for Michelin, bigger brake discs for the race in Austria, and several suspensions. We worked on the bike and improved the set-up. In the afternoon, I kept a good pace. I returned to the level of the race weekend.”

Did you figure out what happened yesterday?
“I only know that the three Yamaha riders who mounted the hard rear tire – that’s me, Morbidelli, and Quartararo –  lost six tenths on the pace, while Maverick, with the  medium, more or less maintained Saturday’s performance. Ducati and KTM, on the other hand, were up front with the hard one. These are the facts, The Michelin technicians told us they’ll check it out. I don’t know why it went that way.”

Let’s change the subject again. What do you think about the rumors of the VR46’s interest in Acosta?

“I read that, but it’s not true. Surely, I’d be happy if it were, because Pedro is the new superhero, but our plans are to continue with the Academy riders.”