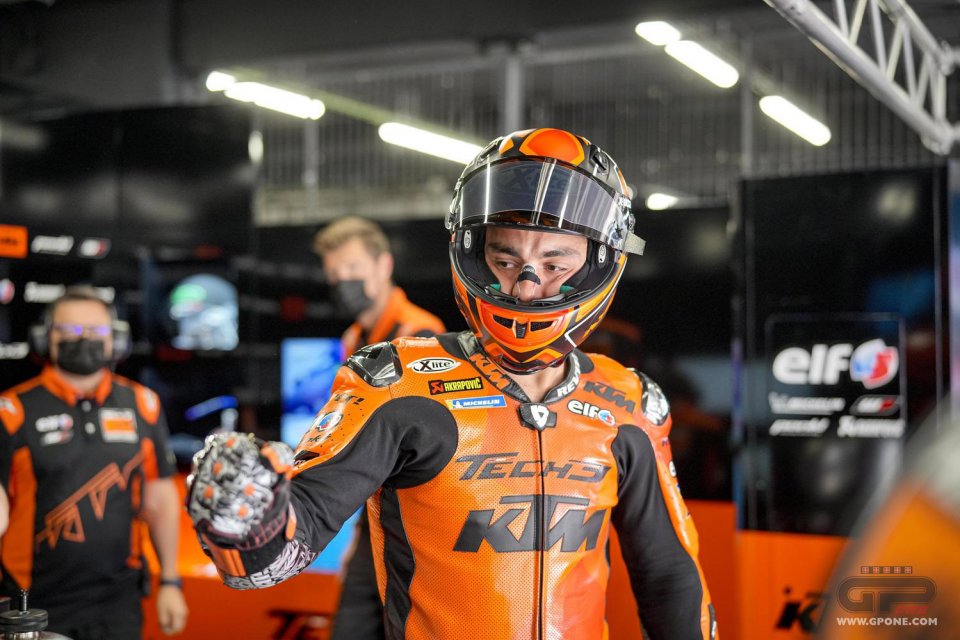 Danilo Petrucci had high hopes for the Barcelona tests, the first opportunity to put the new KTM frame - which seems to have given wings to the two Factory riders Binder and Oliveira – to the test. But in the meeting with the journalists at the end of the day Danilo did not appear to be a picture of happiness, although he did recognize the step forward made thanks to this new technical solution.

The problem for Petrux remains speed at the end of the straight, which in his case is penalized by two closely linked factors. The first concerns the aerodynamics, with Danilo who certainly does not have the physique of a jockey and suffers more than anyone else from this point of view. His not particularly slender build means that he is not in the featherweight category and coupled with the tyres introduced by Michelin at the end of 2019, you get the picture. The two problems add up, not allowing Petrucci to get out of the curves hard and not even to be very fast at the end of the straight.

However, Pit Beirer said in recent days that before making a decision on Petrucci's future, he would do everything to put him in a position to give his best on the RC16. The new frame appears to be the first step.

"I thank Pit Beirer for wanting to wait for me - said Danilo - he wants to try to put me in the condition for me to give my best. I think the next two races can be positive".

How did you feel with this new frame?

"The new frame is a little help, but it's not the only thing I need. The most critical part for me remains the aerodynamics and the speed on the straight. The new frame is a help, but I would like more speed to be more relaxed in braking, which is the only part where I can make a difference. Today we tried different set-ups, using only hard tyres. We wanted to put ourselves in the worst possible condition and it was a long day of testing. I’m satisfied, for sure the most important thing is to get familiar with the bike. I feel good for the next two races. In Germany and the Netherlands it is usually colder and there are no long straights, so I feel comfortable ahead of these races. Then in Austria it will be different. "

Are the differences between the old and new frames obvious?

"For me the two frames are very similar, but the new one makes you feel good in the saddle and makes you close the corners better. My goal is usually not to stress the tyres too much and this happens because I weigh more than the others and therefore I put more weight on the rear. This frame allows you to recuperate something from this point of view. I will continue to use this new frame, we will do some data checks but yes ".

The age-old problem of your rapport with these Michelins remains…

"The problem is that this tyre introduced at the end of 2019 has a very soft and weight-sensitive carcass, which is why I can never make good use of the new tyre. As I suffer so much in top speed, I have to try to accelerate as best I can. The frame is a little help, but what would really help me in the race would be to be faster on the straight so that I don't get overtaken easily and maybe even help me overtake. There will be updates that will give me more power, but nothing from an aerodynamic point of view. "

New aerodynamics, however, won’t be coming…

"Yes, in fact. I will not have a different aerodynamics, due to homologation and from this point of view we are blocked".

Your weight remains a constant problem in your career…

"My weight is extreme and it takes the problems to extremes when they are there. I always have the feeling as if the tyre doesn't support my weight. I have the sensation of opening the gas and losing time, pure acceleration is not good and this makes me lose speed. We are working on it, we need to understand how to improve from this point of view to be stronger at the end of the straight.”

Can the new fuel that Oliveira and Binder used be any help?

"It seems that there is a different mapping of the engine thanks to the new fuel which has already given incredible speed to the two factory bikes at Mugello. I cannot have that speed because I am physically bigger, but if we look at the points on the track where I lose, they are the points where the bike is upright. I can brake and I corner like all the others, the problem is when we straighten up the bike and I start losing time. This slightly different frame does something, but I would like more speed to fight in the race , otherwise you are doomed. Take Morbidelli, he has an incredible pace, but then on the straight he can’t stay close to the others and this prevents him from making his own pace. Speed on the straight is always a big help. "