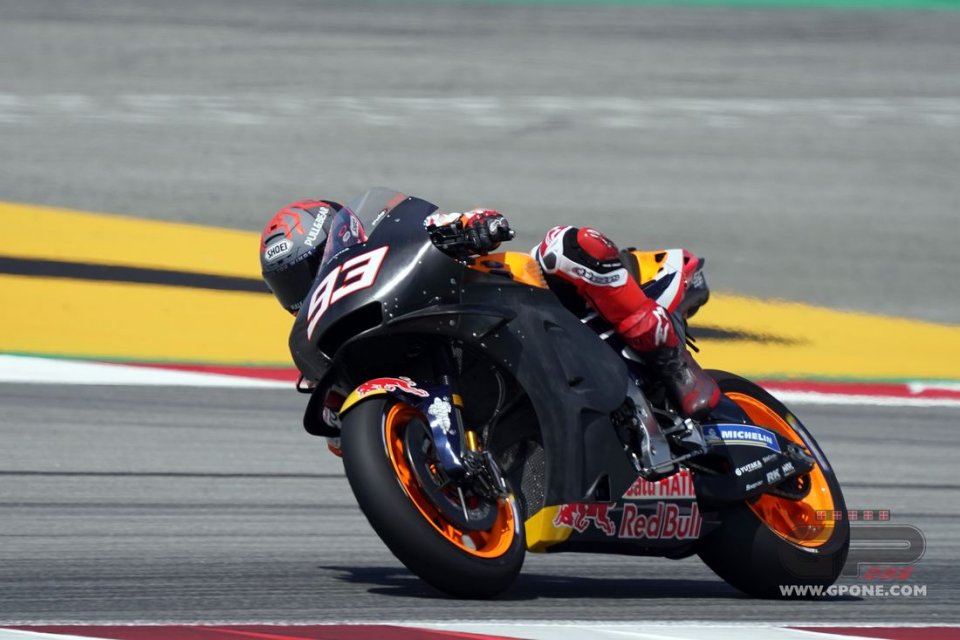 Marc Marquez pulled out all the stops this time and wanted to take advantage of the test day in Barcelona, from the first to last minute, in order to test Honda’s innovations and also put his body to the test. The 87 laps he completed were the proof in the pudding.

“I’m worn out,”  he said smiling. “Today I suffered, but I needed a day like this to just ride. I tried things, but what was important for me was laps, laps after laps, and that's how it went. It wasn’t bad at first but, in the afternoon, I preferred not to push and just ride. Now it’s time to rest and move forward in terms of physical condition. This day will be important for the future.”

In the garage, he had a completely black bike, the laboratory one, and he also used low wings, similar to those used by Yamaha, already seen this year in previous tests.

“One of the things we’ve been working on is aerodynamics because we have the ability to homologate a new one,” Marc confirmed. “Honestly, I felt slight differences, but it could be useful to have a fairing that can help us in the faster circuits. I tried many things. I had a “black” bike, but it’s not a prototype. It’s very similar to the one I ride now, but we need it to verify some concepts for the future. We’ll work again in the upcoming Misano tests.”

But everyone wants to know about the lab bike.

“I can’t be more specific or they'll kill me!”  he said jokingly. “The engine is the same. There’s just a few differences in balance. I made big changes every time I got on the track to understand the problem and which direction to take. It wasn’t a bad day. I was able to ride better than on the race weekend, and that’s positive."

Pol Espargarò: “We have many problems, I'm focused on the present and not on the future”

Pol Espargarò also pulled out all the stops, and he needed to, because his adaptation to the RC213V proved far more difficult than expected so far.

“It was quite a busy day, because I had a lot of things to try to find the problems and, more importantly, the solutions,” he explained. “There was something that might be useful for Sachsenring, but until we’re there, we won’t know for sure.”

“I focused on the bike I used over the weekend. At the moment, I think more about the present than the future because we have enough problems,” he pointed out. “If we can fix them, the next bike will be a lot faster, and that’s what I’m trying to do, and I finished the day with good feelings.”