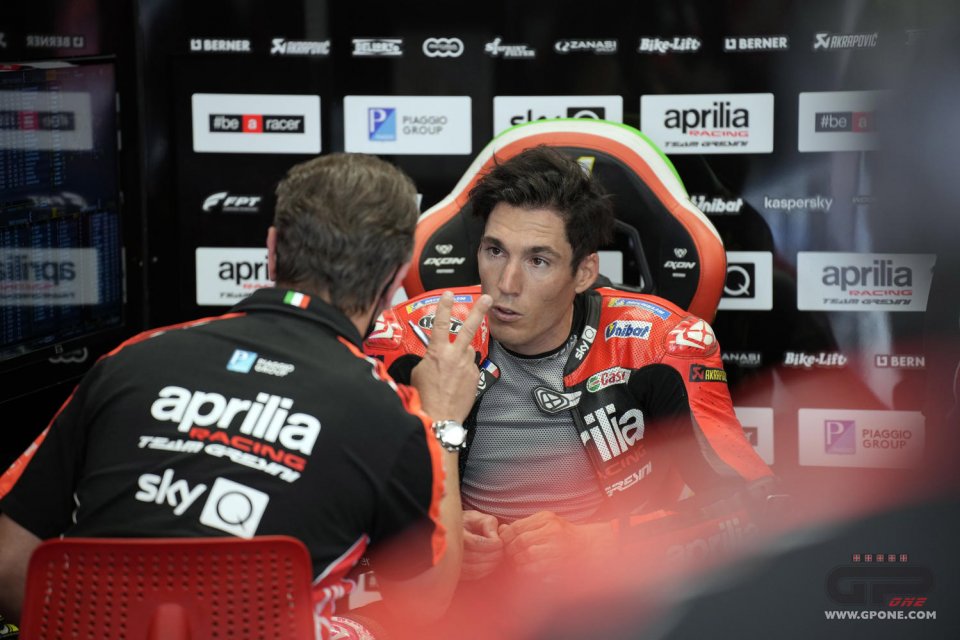 Aleix Espargarò unfortunately crashed out during the Barcelona Grand Prix while he was producing one of the best races of an already excellent season with the Aprilia RS-GP. The Spaniard was close to the top five when he lost the front just after strenuously defending his position from Marc Marquez, with whom he also engaged in a terrific scrap on the track.

The Montmelò round did at least confirm how fast and also multifaceted the Noale bike is, thus allowing the Spaniard to qualify regularly close to the front row and then fight in the race for the positions that in the past were just a mirage. The moment Aleix will be able to celebrate on the podium appears close, but today there was a mixture of anger and disappointment on Espargarò's face in the usual meeting with journalists at the end of the race.

"I was catching Zarco, but I stressed the front tyre too much and I arrived long into turn one - said Espargarò - I went wide and Vinales passed me. I tried to stay close to Maverick to try and pass him again later, but I lost the front at turn nine. Unfortunately that’s how it went."

"I'm very disappointed for the crash. This morning I had a bad warm-up, I had no rhythm or speed. In the end we changed the set-up of the bike and chose a different tyre and I found that I was very competitive. I made a mistake and I'm disappointed about that for the team. But today we saw that Quartararo couldn't make the difference he made in practice and Mir also appeared in difficulty. "

Do you mean that KTM and Ducati were too fast for everyone today?

"The fact is that when the conditions are like today, you can only make a difference in braking. Ducati and KTM have the best engine and they just need to straighten the bike and go, as if it were a dragster race. This is frustrating because we saw that even Yamaha and Suzuki cannot compete when this is the situation. "

But when you are alone on the track, like them, your times are a benchmark...

"When you ride alone you can do your own lines, but when you are in the race, you have to manage the tyres and the full tank, everything changes. You always have to risk, you always risk crashing. This is also their advantage. If we really want to fight for the podium, to stay ahead of everyone, we need more power ".

Did you see what happened to Quartararo with his leathers? Do you think a rider should be stopped in a situation like that?

"No, come on. These things happen. What can you do when it happens in the race, can you stop a rider? It’s certainly dangerous, I understand. But Fabio is fighting for the world championship, what are you going to do, stop a rider because the zip is broken? I understand that we are talking about safety, but that's how I see it. "

Instead how is your arm going, did you have any problems today in the race?

"The arm was fine. A stitch broke this morning but after that it was okay, I didn't leak any fluid from my arm. Now I have a little hole that is a bit dangerous for infections or things like that. But the guys from the Clinica Mobile managed everything well, now it remains to see tomorrow how I am in the test. Maybe I will just need to rest a little and then think only of reaching the top of my condition at the Sachsenring. "

Marquez: "I refused to accept not being able to win, it was my weakness...