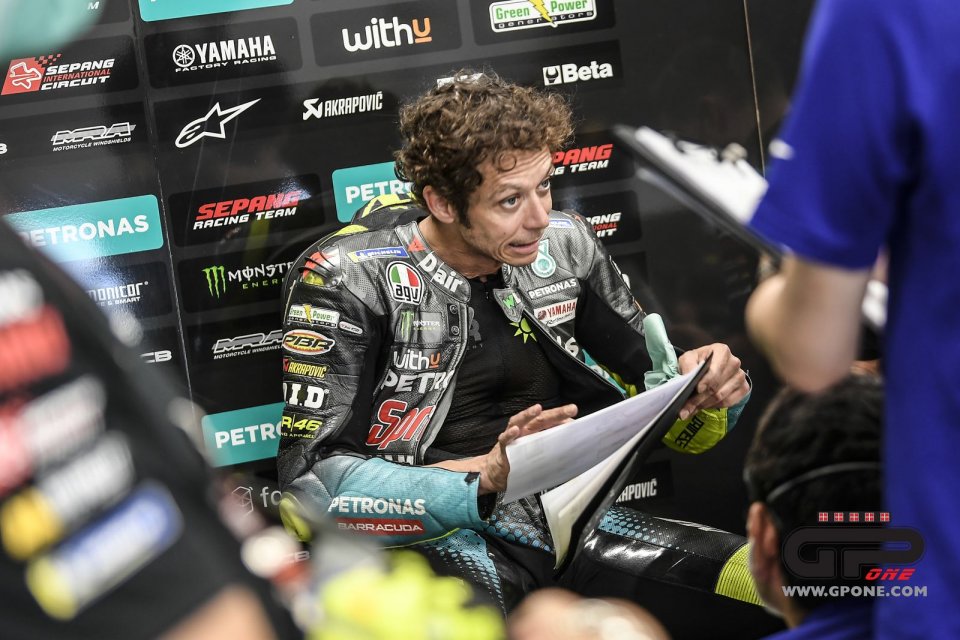 Last night Valentino looked as if he was heading towards another weekend of suffering, but today he managed to rise up again. A good FP3 in which he earned direct access to Q2, seventh quickest time in FP4 and then a big slip in qualifying that cost him dearly: a crash and 11th position. Despite everything Rossi's mood today is very different from what it was a few hours ago.

“I like this track and we have improved the bike – he explained the transformation - Yesterday we made a mistake in going in the wrong direction, something that happens to more or less all the riders in a race weekend. The problem is that, when it happens to me, everyone tells me that I'm too old and I have to retire after just one practice session gone wrong. Today I had fun”.

At the end of FP3 there was an ovation in your garage, can the pressure be felt?

"I'm very happy with the atmosphere in my team, I don't think we have any pressure, if anything it's genuine support. All the guys understand that we are facing a difficult challenge and are very sad when the performance is not good. We all know we need good results and we also know that we can do them. Today was a fun scene, going straight into Q2 is a great result for us. For the rest, we just want to stay up at the front, as is normal ".

Did you take a step forward in that direction today?

"For me it was a very positive day, right from the morning we changed the Yamaha set-up and the sensations were better, as was my pace. Also in FP4 I had taken another step forward and I set a good time, I was 7th, unfortunately I crashed in qualifying and then had to run to get the other bike. It was difficult, I'll start 11th but I think I have better potential. Unfortunately that’s the way it went. Now we have to wait for tomorrow, I hope the weather holds and is dry. Furthermore, the choice between hard and medium tires at the rear is still open ”.

Will it be a waiting game in the race?

"It is true that everyone suffers a significant tire drop, even on the front, but I think at the beginning it will be a sprint race, because 85% it will be decided in the first 2 or 3 laps. Then another phase will begin, very long, for the remaining 15%. I'm sure everyone will push a lot at first. "

Last year you fought for the victory, what do you expect for tomorrow?

“Last season I was very strong here, more or less like now, but the problem is that the level has risen. When I crashed I was second, 7 tenths from Quartararo, but then I was starting from the front row, while tomorrow I will be 11th and it will be more complicated to stay in that position. Anyway, I have the potential to have a good race, I have a good pace and I feel good on the bike ”.

“It's a big problem, actually it’s a real pain in the ass (laughs). It is a tough and difficult situation, what is impressive is that everyone is strong. For someone in my condition it is difficult, but it is for everyone ”.

Is this why the MotoGP riders have also taken the habit of waiting for a tow?

“When the gaps are so small and everyone is very strong, the difference between starting from the first and third row can be one and a half tenths. It is normal for everyone to try different tricks to find that extra speed, because 2 tenths can change your weekend. In MotoGP, the tow is not as important as in Moto3, but it is very important, more than in Moto2, for example. Maybe on your own you can be 7th, but following someone you are in the front row, so there is a lot of strategy ".

This weekend you can see your heartbeat on TV, does 170 bpm in FP4 surprise you?

“In that session I struggled quite a lot because I did 17 laps with only one stop. I was expecting to be between 145 and 170 beats, which is what I work with in training, so that's not bad. It also depends a lot on everyone, you shouldn't be fooled by certain numbers. I remember that Dovizioso was around 180 last year and he is very fit, having higher beats does not automatically mean being less fit ”.