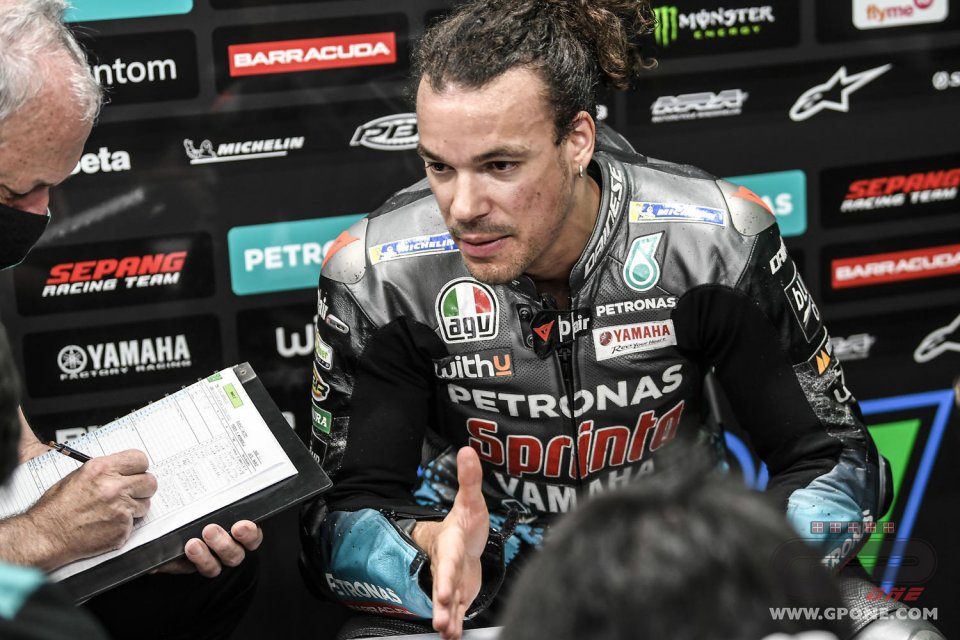 Franco Morbidelli sees the glass half full at the end of qualifying at Montmelò in Barcelona. A fifth place on the grid that does not seem to fully reflect the potential of the Frankie-M1 pairing, but it puts him in a good position to have high hopes of scoring a podium finish tomorrow.

During the briefing with the journalists at the end of the day, Morbidelli appeared quite serene, even though he did acknowledge that he was not sure tomorrow that he would be able to stay with the leading group until the end of the race. He has too many variables related to tyre wear, which here seems destined to determine the destinies of everyone's GP. Before talking about his Saturday, we asked Morbidelli for an opinion on the Miller-Marquez affair, which this time had a very different outcome to the similar episode at Mugello between Marc and Maverick Vinales.

"It depends on the situations and how you are doing, on your form - commented Morbidelli - In my opinion if you are fast and Marc is not, you can give a damn. If you have the same pace as Marc and can steal a position it becomes a problem, as we saw at Mugello. At Mugello Maverick and Marc were similar and Marc took a position that Vinales also aspired to. Here it seemed that the tow, which is Miller, was very different. It seemed that it was a gesture of help and not competition, let's put it that way. It depends a lot on the situation, if you find yourself towing someone who doesn't give a damn then you have a hard time helping him.

Let's talk about you and your Saturday instead…

"It was a good day, I did a good qualifying. I felt good with the bike, it allowed me to push hard giving me only good sensations. Maybe my best lap was cancelled by the yellow flags, but that's okay. The race will be difficult, there are a lot of question marks about the tyres and it will be very important to make the right choice. We are sure that there will be a drop with the tyres, whatever solution we choose. We must be prepared to suffer in the race, also because we do not know at what moment of the race. In the race there will be the drop and therefore we do not have a precise goal for tomorrow. There are a lot of riders close together, with a similar pace and I know it will be tough and that it will be really a struggle. "

Can you indicate any favourites?

"There will be a lot of rivals fighting for the win tomorrow. The KTMs are strong, the Ducatis will be there too. Many really strong riders will fight tomorrow. For me Quartararo is a cut above everyone else, but after him the package that will fight is really compact, and it’s difficult to point out one in particular. In races you never know how it can go, but honestly I don't have any strategy to combat Fabio for many different reasons. I'm just choosing a strategy to make the best possible race and that's it. I also think that Fabio has something extra on this track, he's always been fast here and he has been in the past. He's got something extra than anyone else, but if there's anyone who really needs to stop him, it's not me. At the moment at least ".

You continue to be fast with an M1 that is not exactly up-to-date. Are you proud of this?

"The fact that I am so fast with this bike certainly makes me proud, this is absolutely true. I repeat, it is not a bad bike but it is objectively the oldest on the grid. But unfortunately pride does not make you faster. It can only make you feel better when you're away from the track, that's all. "

Tyre drop is the bugbear of the race for everyone…

"There will be an exaggerated tyre drop and we know that the Suzuki does very well when the tyres drop for everyone. They generally remain very fast even in these circumstances. Last year my race was compromised by the drop of the front tyre and it seems that this year this risk does not exist for the front. I suffer more from the wear of the rear, it will be interesting to see how I will go with the tyres finished. Today I did not have a bad pace in FP4, but we have to see tomorrow how things will be. It will also depend on how the group will be, if I have to push hard to overtake. Difficult to make predictions, there will certainly be a strong tyre drop ".

Montmelò has a long straight, the first corner is far away. It will be a delicate start for you because you do not have the best engine…

"The first corner is far away and it will be important to make a good start hoping that the others do not all do the same. It will be necessary to remain in positions similar to the starting one. I know we will have to fight and suffer, tomorrow I will simply have to be ready for this".