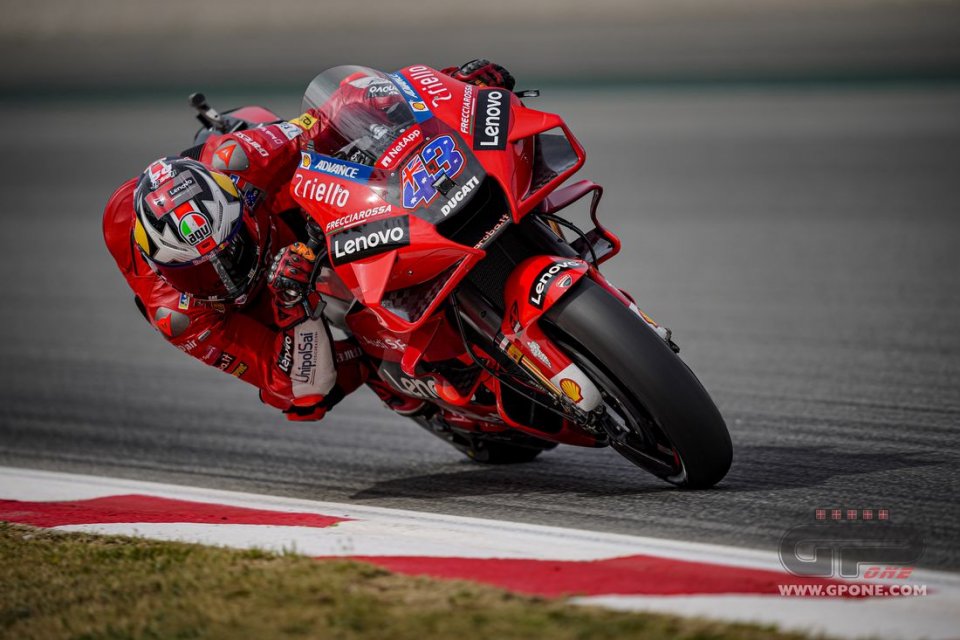 “I feel like an idiot, because I came to Barcelona two weeks ago with the Panigale and said, ‘Yay, there’s a lot of grip!' Everything is different in the MotoGP.” Jack Miller was ironic when explaining that Montmelò hasn’t changed this year either, and that all the riders will once again have to deal with its poor grip. Despite everything, the Australian rider defended himself with the 7th time of the day.

"The asphalt continues to be slippery. It’s a characteristic of this track, maybe because it’s close to the sea,”  he said in resignation. “But it usually improves with each session, and Sunday should go well, also because we’ll be racing before the Moto2. Today I focused mainly on the race pace, and the flying lap didn’t go badly, even if it wasn’t perfect. The rear moved a lot in acceleration, and the bike shook. We’ll have to work more on the set-up and then manage the situation.”

The choice of tire will also be important, and Jack experimented with it today.

“In the morning, I rode the whole time with the medium, without ever changing it,” he explained. "While, in the afternoon, I tried the soft, but I realized that it moves a little too much, so I made some comparisons with the medium. I saw that some riders mounted the hard. I’ll do it tomorrow in the FP4 too. It was already planned.”

The goal is to prepare in the best possible way for Sunday, because it’ll certainly be a very strategic race.

“It has always been like this in Barcelona. If you don’t manage the tires, you lose a lot. I made my first top ten in the MotoGP on this track, and I know it well,” he recalled. “There are very long corners, and you have to be gentle on the gas, otherwise, the tire drop is very quick.”

But  Zarco proved that Ducati is fast at Montmelò.

“He has a different riding style than mine. He gets the bike up very early out of corners, but I’m lucky to be able to look at his data, since he’s really fast,” Miller concluded.