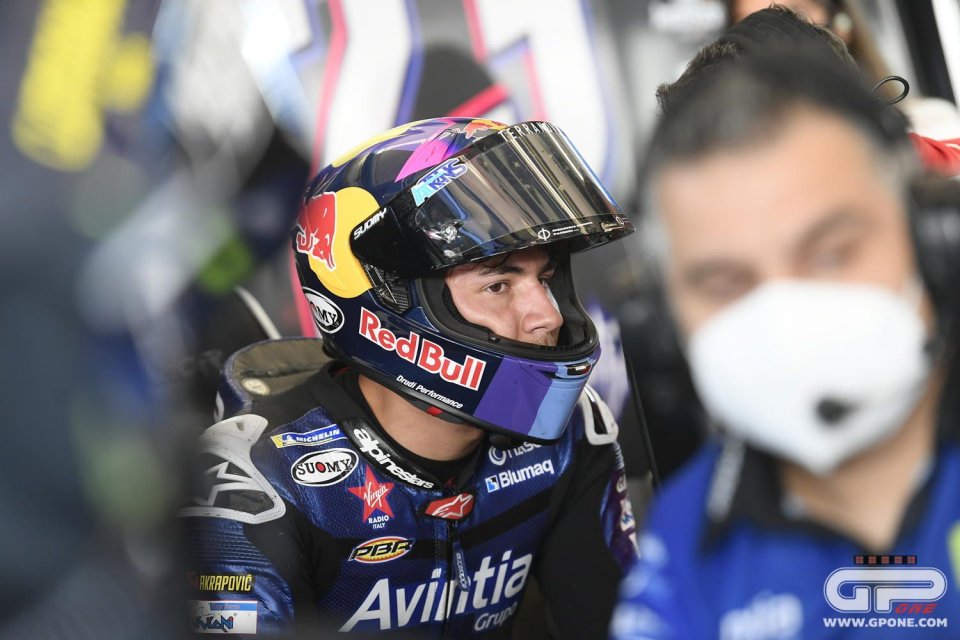 Enea Bastianini will start from the 17th slot on the starting grid in the Catalan Grand Prix. It was a complicated qualifying session for him, also conditioned by the crash in FP4 which did not allow him to directly gain access into Q2.

"This morning I crashed after three laps and lost some confidence for FP4, this didn't allow me to go directly into Q2 – were Bastianini's first words to describe the day - In FP4 I tried to recover a bit of pace and I put the hard tyre on the rear, while in qualifying we were all very close. I lapped hard, more or less like the times they did in Q2. It means that there is a good level. I certainly could have done a bit better. Today I felt on the limit with the front and I wasn't able to do everything I wanted. "

Luca Marini said he has a lot of confidence on the front and for this reason he enters the corner too fast and then loses at the exit. He also said that perhaps it would be better to ride the bike more Dovizioso-style, stop it and then take advantage of the acceleration. Do you think this is correct?

“Especially in qualifying there are some points where we need to make more use of the front tyre. Both Luca and I perhaps make the mistake of pushing too much on the front. Today I tried to avoid this and it actually went a little better. Looking at the telemetry and comparing the data with Miller's I saw that I only lost in three places. There is still some margin but the bike is the 2019 one, not the new one, so we will struggle a bit more. "

What do you think of what happened between Jack and Marc in Q1? Do you also think it's important to hook up with someone?

“Everyone thinks of themselves and then sometimes it happens that when you are more in difficulty, you look for someone you can stick to. Marc is currently in a difficult situation, he is no longer able to do what he did before and is looking for a tow, a bit like me. Yesterday I was more confident and today less so I had to look for a benchmark ”.

Did you happen to lap with Marquez?

"Yes, I did a few laps with him. You can see that he is conservative, he is not giving 100%, I don't know if it depends on his arm or on his moment of difficulty. I don't know how to explain it, you can see it's not him. It can also be seen from the fact that he doesn't use the front much and that he doesn't do the same braking as before. He doesn't have an incredible corner entry ”.

Do you think that not having entered Q2 is due to the crash this morning?

“Difficult to say. This morning already in the first three laps I realized that I didn't have the same speed as yesterday. I was suffering a bit on the front, which is what I use the most ".

“It was Fausto who discovered Bastianini and Di Giannantonio, he would have...