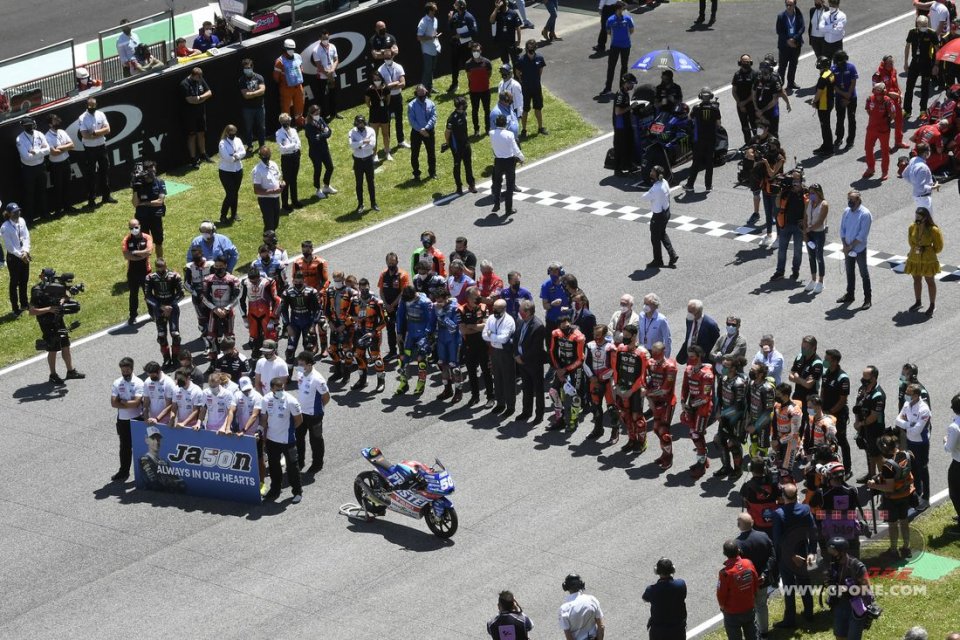 This time, after the Mugello Grand Prix, you won’t find in these lines the usual story of the weekend that has just ended. There are times when you have to stop and reflect, to talk about the Italian race there will be time and a way, but this is not that time.

Stopping is a luxury that the world championship no longer seems to be able to afford, if not for a minute, before setting off again. Sponsors, TV, business all want it this way, these are the rules of a game imposed by those who do not play it.

When yesterday, , the news of Jason Dupasquier's death arrived shortly after noon, everyone asked themselves: is it right to keep racing? There is no right answer. “It doesn't make sense to do it, it doesn't make sense not to. What happened cannot be changed," explained Valentino, adding that he would be prepared to take off his leathers and go home.

The riders don't lie when they say they raced in Jason's honour, Quartararo's dedication was sincere. How sincere Bagnaia's words were: "I didn't want to race; I even told my team. It's not right".

Men are not all the same and neither are riders. They look identical behind dark visors, while caressing danger at more than 300 per hour, with those armoured leather suits that hide a heart, thoughts, even fears. "The black spot", as Morbidelli called it, that area of ​​consciousness that can be forgotten, but not eliminated, the one that knows that fate could choose you too.

Racing for a rider who is no longer there is a nice gesture, but the same goes for stopping. There is no right or wrong, but there is a choice that should only belong to the riders. Too bad no one asked them what they thought…

The news of Jason's passing came when the Moto2s were lining up for their race and the riders raced without knowing anything. When a few drops of rain fall, the start is delayed, the riders are (rightly) listened to, but when a tragedy happens no. The MotoGP riders gathered in a minute of silence a quarter of an hour before battling it out on the track, as if it were normal. Like when Bill Ivy, in 1969, lost his life on the re-entry lap after qualifying for the German GP in 1969 and the riders, on Sunday, started the race next to a bouquet of flowers placed on what would have been the starting grid slot of the British rider.

“You can't imagine how difficult it is for us to have a minute’s silence on the grid due to the loss of a fellow rider, a 19-year-old guy, and then start to race at 350 km/h only 10 minutes later. I don't understand how our minds managed to do it and I feel bad about myself for doing it” was the outburst of Aleix Espargarò. “I feel dirty” added Danilo Petrucci. “It's our job, you have to do it” was Bagnaia's answer to his doubts.

There was no right decision, but the wrong people made the decision to race. Otherwise the riders are just the protagonists of a game that does not belong to them, but which would not exist without them. In the past they fought for safety, Agostini defected from the Tourist Trophy, Uncini, Sheene, Roberts and Cecotto led the strike at Spa-Francorchamps in 1979, Schwantz, Rainey and Lawson at Misano 10 years later. They chose.

The MotoGP riders couldn't do it, the Moto2 riders didn't even know they had this opportunity. The Mugello GP could continue, but it had to be the riders who decided. For a moment, the world championship should have stopped, had a look at each other, talked and then decided. Perhaps nothing would have changed, but there would have been a choice.

Otherwise, Dupasquier's tragedy will last only as long as a post on any social media network, accompanied by the stolen words of a poet searched for on Google, only to be quickly forgotten about before the next race. Which will be in a few days’ time and in which Jason will not be there.