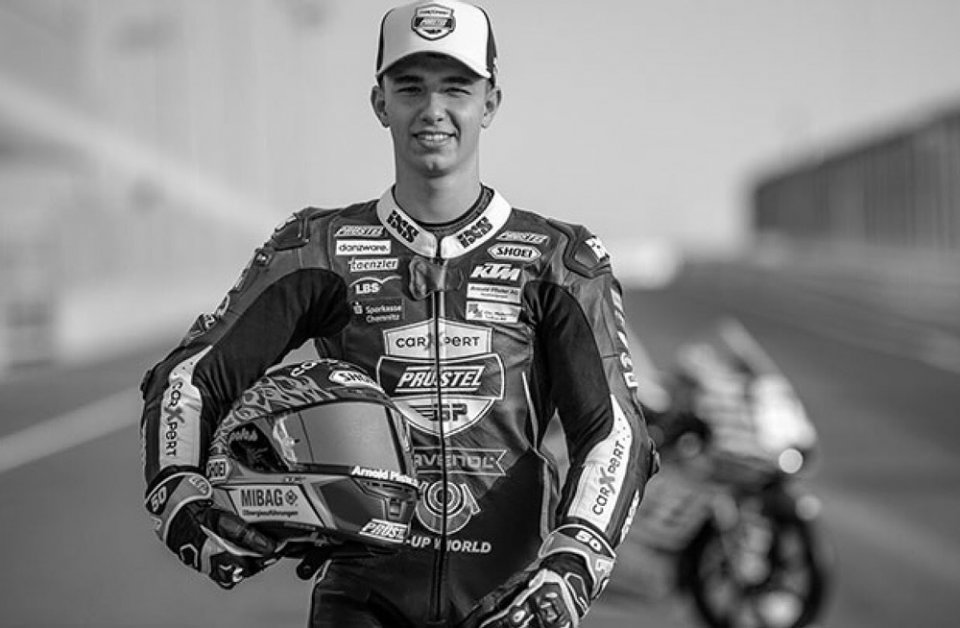 The PrustelGP team wanted to remember their driver Jason Dupasquier, who tragically passed away yesterday. We leave you with their words.

Yesterday the most brutal side of our beloved sport hit us and it is hard for us to write down the pain we are feeling right now. Our world stopped when the Swiss rider Jason Dupasquier couldn’t win the toughest battle of his life after suffering a crash in Q2 during the Italian Grand Prix at the Circuit of Mugello (Italy). The injuries were so severe and we mourn the loss of a young rider, but first of all, a great person. Our sincere condolences are for Jason's family and friends.

He was always an incredibly nice and funny guy, and a role model for many young talents. That is exactly how we want to remember him. A hardworking and respectful sportsman who made his Moto3 Championship dream come true. We can all be proud of the legacy Jason leaves behind despite his young age of only 19.

We are overwhelmed by the huge sympathy and all the messages we are receiving. Now we need to accept and process this sad situation. We are trying our best in order to continue Jason's mission and create an honorable memory for him.

We want to say a few words about our time together with Jason.

After a one-day test with us after the 2019 Austria GP, Jason's first official appearance was in January 2020 at the Hockey Open Air in Dynamo Dresden's stadium, and in front of a crowd of almost 32,000. With two brilliant show runs, made possible by ADAC Sachsen, Jason Dupasquier brought a true, warming MotoGP™atmosphere into the stadium with his Moto3-KTM in freezing cold conditions. It was a first taste of German Grand Prix, our home GP at the Sachsenring.

And then he was together with us for the 2020 Carxpert PrüstelGP Team Launch, in front of sponsors and numerous fans at the Sachsenring. This friendly Swiss with his charming accent was really appreciated by the racing community, thanks to his incredibly positive charisma. He quickly became a crowd favourite and for us it was the start of an extraordinary partnership.

As the son of successful ex-motocross rider Philippe Dupasquier, he was born with a passion for petrol and speed. In 2019, he competed in the Red Bull MotoGP Rookies Cup and also gained experience in the CEV Moto3™ Junior World Championship.

2020 was expected to be a challenging year for the PrüstelGP team in sporting terms. Jason made his Moto3 debut in March 2020 at the GP of Qatar. For Jason Dupasquier and his last year's teammate, Barry Baltus, it was a difficult rookie year for learning and catching up with the best riders in their class.

In 2021, everything was different. The hard training over the winter months paid off and we had a sensational start to the season with both riders in the points in the first five races. We were looking forward to our home GP, full of excitement with our two riders Jason Dupasquier and the Japanese Ryusei Yamanaka.

Now we have to return to Sachsenring without Jason. But we want to honour Jason and race for him. We are extremely proud of what Jason Dupasquier has given us during his time with the PrüstelGP. He was doing a great improvement, being constantly in the points.

We firmly believe that he was very close to his first podium in Moto3 World Championship.

Now we want to go this last way together with him. We can't tell you today what will happen next - but one thing is for sure, it will continue - for Jason! "Always in our hearts" - we are a family and Jason will remain in our hearts forever. Let's stick together in this difficult time.

We thank you from the bottom of our hearts for all your support and messages.