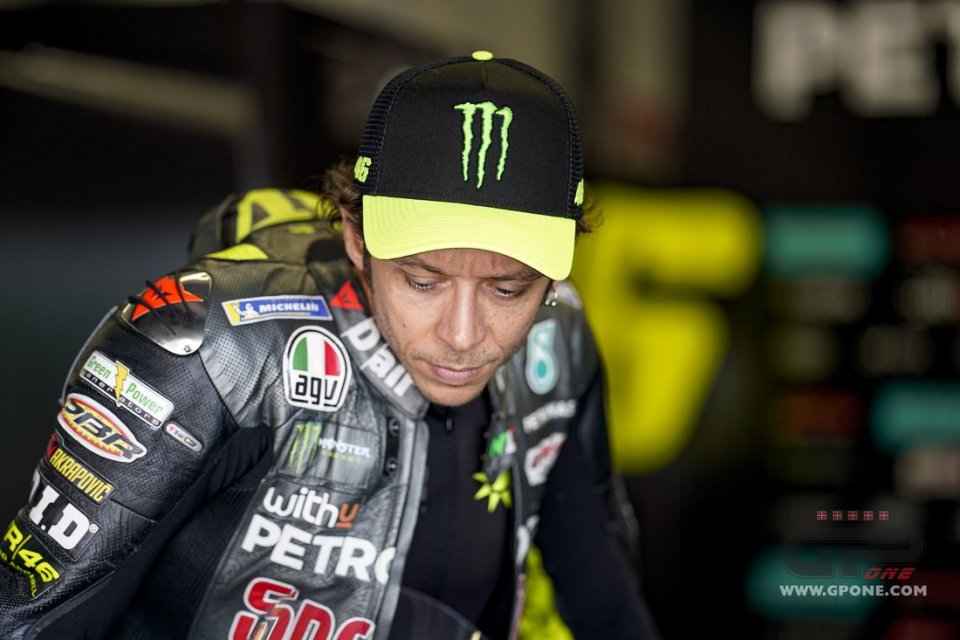 You don't need the years, the past experiences, the scars you carry inside; even if your name is Valentino Rossi, you are defenceless when faced with tragedy. The news of Jason Depasquier's death struck all the riders in the paddock and Valentino has been trying to find an explanation for all this.

“First of all I want to offer my condolences to his family, to the team and to his friends - he said - I already knew last night that the situation was very critical, desperate, Sasaki had hit him on the head. But it is one thing to know that his condition is serious and another to know that a rider is dead. You wonder if it makes any sense to continue, to go and race. I don't think it has any sense but neither does not doing it, because everything we do today cannot change what happened yesterday. It was a difficult day and you wonder why you are racing ”.

There are those who think that if a MotoGP rider had lost his life, things would have changed, but Rossi disagrees.

"In my opinion nothing would have changed. In 2011, in Malaysia, we didn’t race but in that case Simoncelli‘s accident happened during the race, in Barcelona and Misano, after the tragedies of Salom and Tomizawa, instead we did, I don't see any discrimination in this sense. We can ask ourselves if it is right to do it and maybe it is not, but it would change nothing anyway. Of course, you wonder why you do it, what is the point of all this. Everyone wanted to go home, but there will be another race next week. As for myself, if they had told me that we would not have raced, I would have agreed ".

“We have done a lot for the safety of the tracks, but we need even more - continued Rossi - We often ask to widen the run-off areas, but sometimes it is not possible because there is a lack of money or space. With our race gear, I'm talking about suits, helmets, airbags, we have made important steps forward, but the problem of when you crash, stay on the track and are hit by another rider, as happened to Simoncelli and Tomizawa, is difficult to solve, we can do little. In practice we could ride alone, but in the race we are all together, just look at today's Moto3 race ”.

Oliveira claimed that the performance of the Moto3s is too high…

"I think the problem is that they are always so close to each other – was his opinion - Especially here at Mugello, where the tow makes a big difference, there are trains of 6 or 7 bikes, but it also happens in Moto2 and MotoGP. For sure if all the bikes went a little slower it would be less dangerous, but I don't know how to make it happen. "

Valentino then talked about his race.

"I had a good start, I passed two or three riders, but at the first corner there was a bit of a mess - he says - Vinales got out of line, I had to brake, and I found myself in the middle of Pirro and Lecuona. We touched and I lost contact with everyone, I found myself next to last. It was a shame because I had a decent pace ”.

Better than what we saw in practice…

“We had some problems because there are a lot of bumps, especially when you brake on lean - explained Valentino - We made the bike slightly softer and I felt better already in the warm-up, then we were able to set up the electronics for the race, we did a good job from this point of view. Overtaking the other riders, however, was not easy because I came out a bit slowly from the last corner and I was not exactly a lightning bolt on the straight. In the end I finished 10th, I got some points and it's not bad in the situation we are in now ”.

Finally, Rossi commented on the performance of his brand-mate Quartararo...

“He made all the difference and it's not the first time - he congratulated him - he did the same thing in Qatar, in Portimao and Jerez, before having arm problems. Here he has always ridden to the maximum and has made no mistakes, if he has no more physical problems, he is the favourite because he is the fastest. This weekend the only rider at his level was Bagnaia, if he hadn't made a mistake, it would have been an interesting battle. "

VIDEO - Rossi: “To be able to keep racing, I had to learn how to lose”