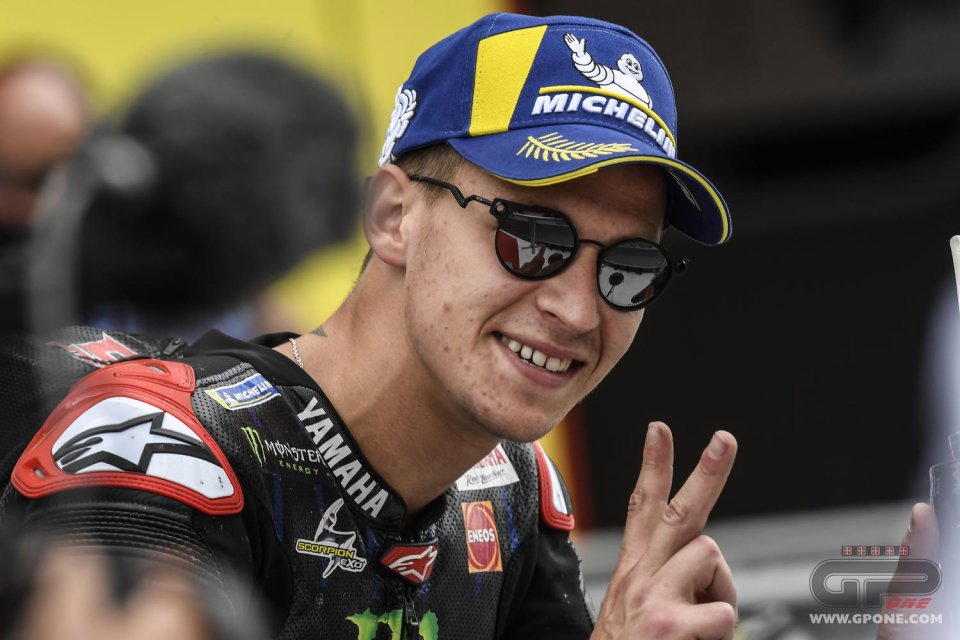 A crystalline victory. What Fabio Quartararo did at Mugello today cannot be described any differently, one of the tracks that on paper should have seen the Ducatis super favourites. Fabio, however, was impeccable, taking advantage of the assist provided by the fall of Pecco Bagnaia and also landed the first important strike in the championship, thanks to a 24-point lead over Johann Zarco, fourth today and first among the rivals in the standings.

MotoGP Sunday was obviously marred by the news of Jason Dupasquier's death, and Fabio Quartararo confirmed in the meeting with journalists how difficult it was to remain lucid in such a situation.

"I'm very emotional, it's very difficult today - said Quartararo - It was difficult to stay on the track, every time I went past where he crashed, I was thinking about Jason Dupasquier, I did it 24 times and it's not easy to manage as a situation when you are at 340 km/h and you have to be very concentrated. This race is for him. "

Did it ever occur to you not to race this Grand Prix?

Can you ever be prepared for such situations?

"You can't be prepared for situations like that, but every time I cross Turn 9 it was always the same. I think step by step they are feelings that go away from you during the race. I never met Jason, he was a boy. And it is always difficult to lose a rider, we are all ready, we know the risks of this sport. But when it comes, we try to move on and forget quickly ".

Do you think it would be better to hold the minute’s silence at a different moment of the weekend, rather than just before your race?

"I think that the minute of silence is a moment of respect for a rider who is no longer there. It is not easy for us, but I think it is right to do it before our start, there is no more suitable moment. I don't want to talk about Jason anymore. It's our job, we know these things can happen. Unfortunately, that’s the way it is, it's our job. We go at 350km/h and it's not normal. He won’t come back, that’s the way it is”.

So let's talk about the present and a 2021 that looks really different, with a perfect Quartararo.

"Last year was a good and bad year. When I lost the opportunity to win the world championship in Portimao I felt terrible, but just two weeks later I was happy and told myself that I had learned so many things that I would use in 2021. The whole season is going well, except for Qatar 1 where I did a rookie race. We also made the podium at Le Man and at Jerez I was up front. Everything was perfect here, I didn't have any pain in my arm. I think I am more mature than last season ".

The Yamaha also seems to have taken a big step forward, now even the starting device works well.

"Yes, that's it. Great start thanks to the device, I wanted to take the lead straight away but I had to wait for Pecco’s crash. Then I just thought about pushing and getting away. We have a really complete package. We don't have the best top speed, but I don't think anyone expected to see a Yamaha, a KTM and a Suzuki on the podium here. I have the confidence to manage even without having the best speed. I have great sensations from the front of the M1 and in the end there aren't so many tracks with a very long straight. We will see what happens in Barcelona, ​​which is one of my favourite tracks. "