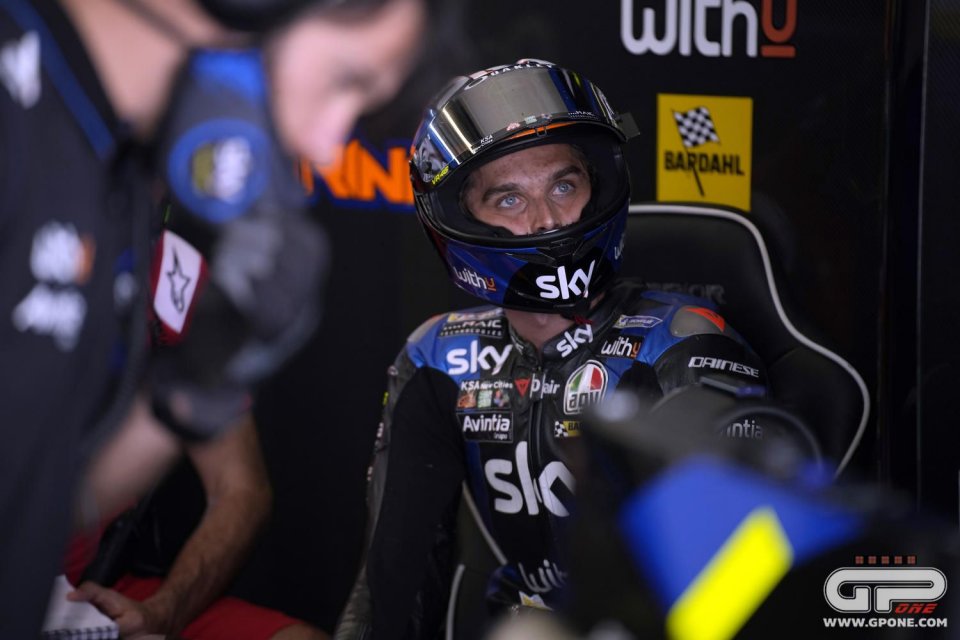 Luca Marini finished his first home GP in the MotoGP in a 17th, and last place. The Sky VR46 team rider complained about the problems deriving from the rear tire. A complicated race during an already dramatic day.

“It was a disastrous race,” was how Luca describe his  day. “I didn’t expect this, since  I went a second faster during the rest of the weekend. The track may have gotten worse today because it rained last night. The grip was strange. I struggled too much with the rear tire in the race, especially when entering corners. I couldn’t brake hard. From the first to the last lap, I couldn’t keep straight. I felt like I was on ice. I kind of know what the problem is. You can’t have these kind of races. I’m sure it wasn’t our fault.”

Do you think the news of Dupasquier’s death affected you emotionally before getting on the track?
“The moment we got the news, just before the Moto2 race started, it was very difficult. I felt an emptiness in my stomach, heavy legs, a strange sensation. We’re riders. When we lined up on the starting grid, and it was time to race, a couple of hours had already passed, so I had time to process it. You concentrate on the work that needs to be done, and you manage to exclude those thoughts.”

If you had been asked to decide whether to race or not, what would you have answered?
“A really difficult question. I don’t know, I think the moment when they would’ve asked me would’ve been decisive. As soon as you hear news like that, you’re quite shaken. It wouldn’t have been easy to coincide the opinion of all the riders. It’s right for the organizer to make this decision. It’s a question I can’t answer. It wouldn’t have been easy. I would’ve had to experience  that situation to be able to decide.”

Do you think you’ll adapt well to the Barcelona track?
“I have no idea. It’ll depend a lot on the tires they propose to us. Barcelona is a complicated track for grip. We’ll have to find the right set-up to be able to lift the bike well when exiting corners and be able to accelerate. Ducati, excluding last year, has always done well there. Difficult to make predictions. It changes a lot every year.”