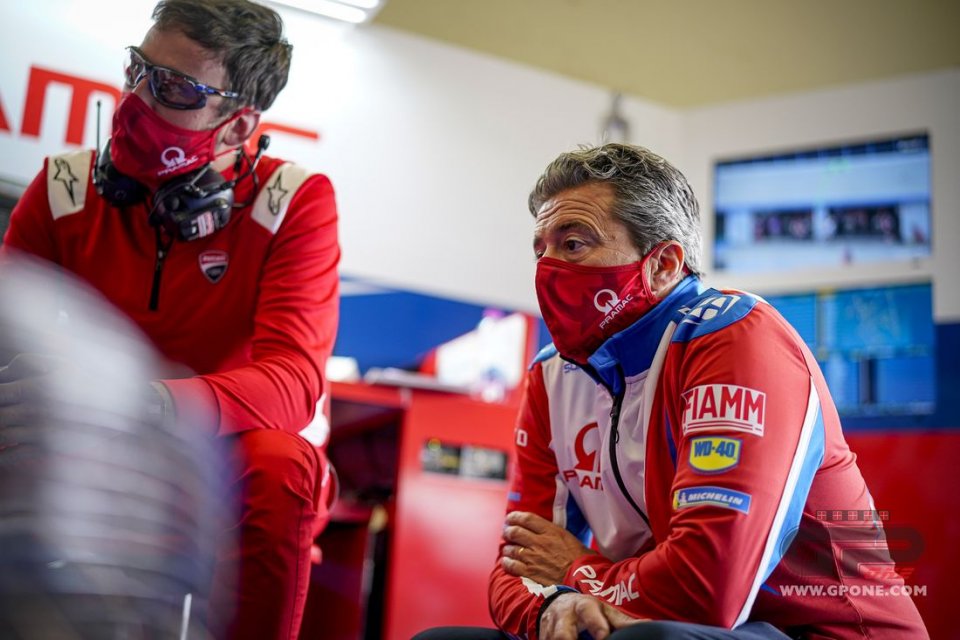 There was a bit of controversy at the end of the MotoGP race. At first, a penalty was communicated to Oliveira, guilty of having passed on the green in the last lap at turn 5. At that point Mir would have been second, but a closer examination of the images revealed that the Spaniard also did the same thing, so everything went back to what it was before.

However, it did not end there because at that point the rumour went around that Ducati would make an appeal to the Race Direction, because if Miguel and Joan were both penalized by one position, then Zarco who finished 4th should have been on the podium.

In fact, the Pramac team did not make any appeal, as team manager Francesco Guidotti explained to us: "I went to the Race Direction not to make a protest, let me be clear about this, but to ask what criterion had been applied for the interpretation – he said - Actually, in this case not applied, and in my opinion rightly so because Oliveira and Mir earned the podium over 23 laps, not at the last lap by going even 10 centimetres onto the green. It was right that I asked for explanations because this situation could happen again with us in the future ”.

The Italian manager then went into further detail.

"The interpretation is that Mir and Oliveira went on the green at turn 5, so not in the last sector, and Zarco at that moment was 7 tenths of a second behind; if he had been inferior in the second they would have intervened - he reported – When I arrived they had already analysed the images and evaluated the gaps and this was their interpretation. I can’t comment on what happened in other categories, in other circumstances and modalities. In my opinion, irrespective of the numbers, this was a correct interpretation… if only it were always the case".

Sometimes, however, it is precisely the constantly changing yardstick that makes you want to turn up your nose at the whole affair…

"It is a difficult rule to always interpret fairly, because the number of cases, based on the category and the track, is infinite – was Guidotti's opinion - Giving a univocal interpretation could also be wrong, because it would mean giving too close restrictions and in the end it could be even worse. I hope it will be applied as well in the future as it was done today ”.

Zarco today decided not to talk to journalists after the race, but his decision had nothing to do with this.

“I saw that Johann changed a bit since yesterday, after Jason Dupasquier’s accident. Even today on the grid he did not want to say anything, he wants to respect what happened in silence" clarified Francesco.