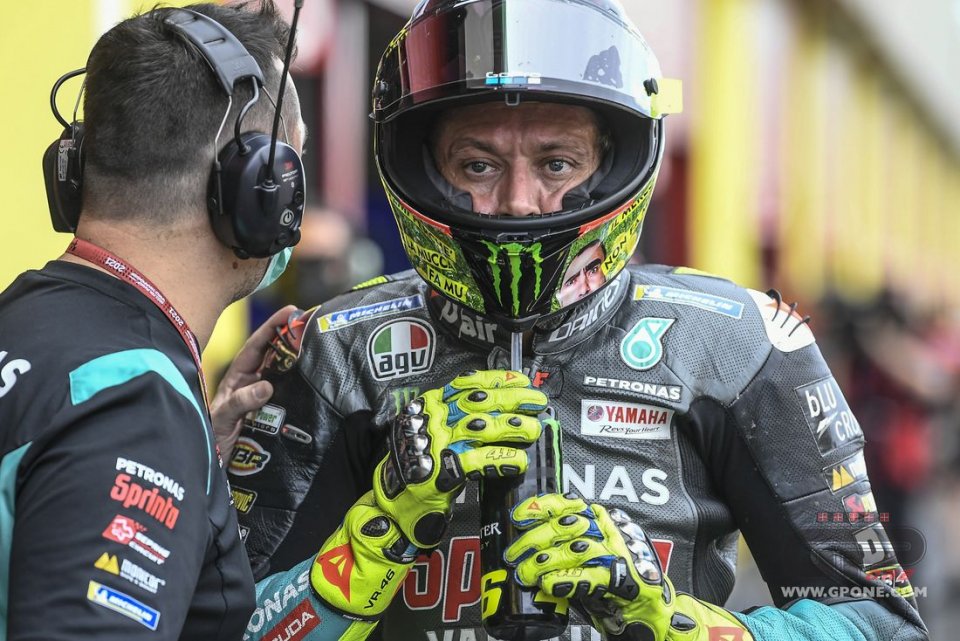 “Today the most important thing is not the qualifying results, but what happened in the Moto3,” Valentino Rossi was stunned by the accident involving Jason Dupasquier during qualification for the minor class, and he wants to talk about it. Even an experienced rider like he is can’t remain insensitive to certain images. You sometimes think that those who race at 350 km/h on two wheels are kind of superheros and nothing can affect them, but that’s not the case.

“It’s hard to see certain images,” Valentino explained. "Another rider hitting you when you’re on the ground is the most dangerous thing that can happen to you. I just hope that Jason is well, that we’ll have some good news soon.”

In those moments, a rider has to know how to react.

“You don’t know what’s happening, and you see images that aren’t optimistic,” he continued. “At that moment, you have two choices. You either run out of the garage, take off your suit, jump in your car, and go home or, if  you enter the track, you have to concentrate only on riding, and you have to try to forget everything else, otherwise it becomes dangerous.”

He faced that choice even today.

“Like last year in Austria,” when Morbidelli’s bike had gone mad a few centimeters from his. “You think about it for a while, but then you regain concentration and everything passes. I didn’t risk running away, ” he said, as he tried to play it down with a laugh.

Certain incidents seem to be part of the game.

“That dynamic is the most dangerous. You can work on the tracks, in suits, in helmets, but it doesn’t change. The only thing would be to ride alone.”

After these reflections, Valentino started talking about his day.

“Difficult,” was how he described it. “I was able to improve my sensations and pace this morning, but not fast enough on the flying lap. Truthfully, I was just nine tenths off the best, but the problem with that means being 18th. In the afternoon, we made some other changes, and I didn’t like them, so I went back. We have to try to improve.”

It seems like even the smallest flaw is paid very dearly in this MotoGP.

“The first thing is that you go really fast. Today I rode on the time of the 2018 pole position, and I was more than a second slower than Quartararo,” he explained. “But the biggest difference is that we’re all attached. Dorna has worked a lot in recent years to get this result, because battles are the strength of the MotoGP, and I don’t think things will change.”

It’s easy to understand how the Doctor feels after a 19th place.

“The results are crucial for every sportsman,” he continued. “We’re all here to stay ahead, to win and, when you can’t – like what’s happening to me right now – you don’t have fun, and everything is burdensome. But I expected to suffer here, like what had happened in 2019.”

Instead, he prefers not to talk about the controversy over Marquez and the slipstream against Vinales. “You already know how I feel. What happened is nothing new, and I don't want to add anything else,” he stated. “In the Moto3, however, they’ve set many rules to limit certain behavior, They could also do it in MotoGP.”

Best if we close with the “cow” helmet.

“I like these slightly silly graphics. They have to entertain and make the fans laugh.”