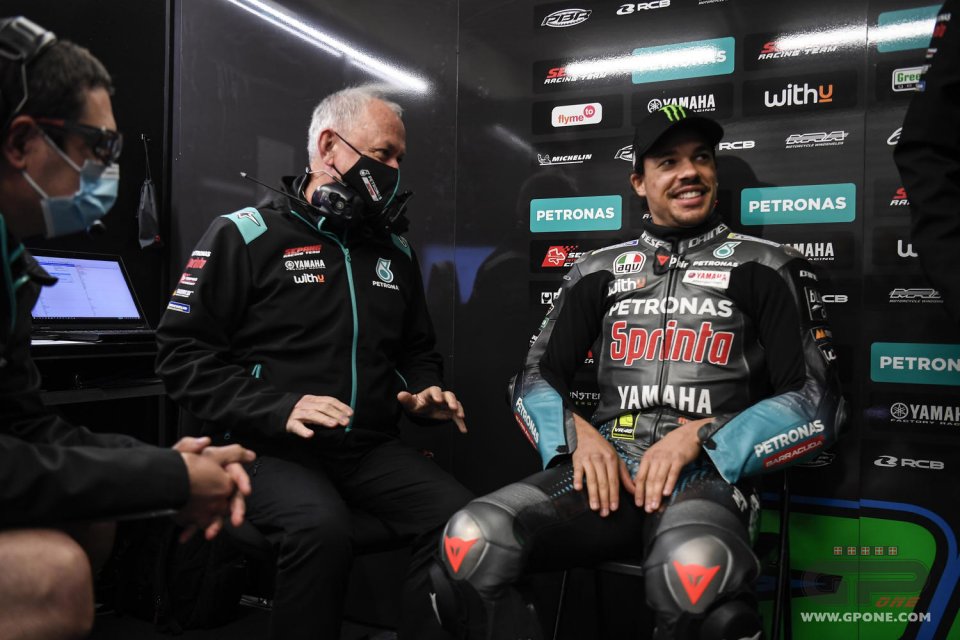 It was not an easy Saturday for Franco Morbidelli at Mugello. The Italian has been fighting for a place in the sun on the starting grid all weekend, often managing to get close to the benchmarks of the best on the track. Today, however, qualifying was a bit different and tomorrow Morbidelli will have to start from the tenth position on the grid, while his Yamaha brand-mate, Fabio Quartararo, took a crystal clear pole.

However, as we now well know, the horsepower gap that exists between Morbidelli's bike and those of all his rivals certainly does not help on a track like that of Mugello and Franco’s hope is to be able to keep in the slipstream of the bikes ahead of him and then respond in the twistier areas of the track. A faint hope, however, given the situation and Morbidelli did not hide his concern.

"Honestly, I'm worried about the race - said Franco - Today I felt the real difference in speed for the first time. I was in the slipstream of Bagnaia. He had passed me before; I was without a slipstream and I felt the effect of the wind. Then I went behind him and on the straight Aleix Espargarò, who is usually not among the fastest with the Aprilia, passed me. But with him too I felt a clear effect from the wind. Usually he is one of the slowest like me, this really shocked me. It makes me think that tomorrow in the race will be a problem when I am in the group. I'm quite worried about the race to be honest, let's see how we can find a minimum of speed. But I don’t think that at the moment it is possible to do it. The layout of the track and the straight do not help us. "

"I'm racing with a two-year old bike. This is the first time it has happened in MotoGP; we are facing new types of problems."

Today we also witnessed the behaviour of Marc Marquez, who exploited Vinales to keep him out of Q2. Do you consider this to be unsportsmanlike behaviour?

"It’s not for me to judge whether it is unsportsmanlike behaviour or not. For now it is certainly a behaviour allowed by the Stewards panel. It is not a nice thing to see from an eight-time world champion, but that’s the situation now and he does it. There’s nothing to complain about."

He did something similar with you yesterday…

"Marc was very smart, it happened to me exactly like with Maverick, yesterday in FP2 I started and Marc stuck to my tail. I saw that he didn't want to break away, but yesterday when I used the short cut to return, he didn't make it in time to come back. Probably today with yesterday's experience he was smarter and ready to get back into the pitlane. This explains a lot of Marc's cunning. "

Was it difficult to get back on track after Dupasquier's accident?

"It's hard, but it's our job. We have to be ready for every session even when we see these scenes. It wasn't much fun to see how many people there were at turn 9, and how much time they spent there. It wasn't even nice to see that they cleaned the asphalt before they left there, taking Jason away. It wasn't nice to see the helicopter for sure. I hope he can fight, whatever he’s fighting for now. This is our sport sometimes".

Do you think the accident is the outcome of the qualifying game they all play in Moto3?

"Unfortunately, I think it is a fatality, I did not see the accident well. This is what happens in Moto3 and also in Moto2, especially on some tracks. This is how it goes, unfortunately it is a dangerous sport. You have to understand in which situation we find ourselves, I hope everything will go well ".

Are you unhappy with this qualification anyway?

"I don't like this tenth position because I didn't repeat the time set this morning. Something changed this afternoon, seeing as the setup was the same. We have some doubts about what happened, it's difficult to understand how things are but we will try. In any case, starting tenth is not the best for tomorrow. It will be a very tough Sunday but we will try to fight anyway ".

Quartararo says today’s lap was the best of all time as he dedicates pole to...