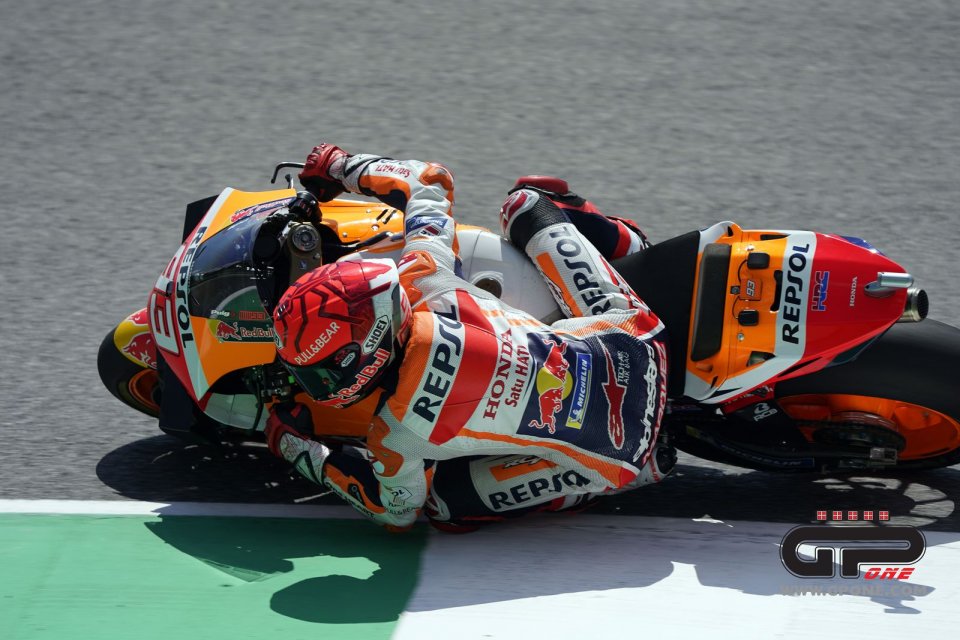 Marquez in thirteenth place, eight-tenths down on the overnight leader Bagnaia and double the gap compared to his teammate Nakagami in seventh is something difficult to explain. Marc tried to do just that at the end of the first day of practice for the Italian Grand Prix, analysing the reasons that led to this result, both physical and technical.

"First I want to talk about my arm: there is a plate on the humerus, but it does not need to be removed. It is not an option; it can stay there. As for the antibiotics, if the doctors give me the OK after Barcelona, I can stop taking them. Speaking of the shoulder, however, we need to understand the situation better. It is certainly more stable now, but today, for example, here at Mugello, I realized I have a big limit. After FP1 I compared today's data with 2019 and we saw that I lose two-tenths of a second in each of the three quick changes of direction. Almost 7 tenths in total… I have to be patient, we will have a better situation in the future”.

Marc is as busy as ever … and on two fronts.

Marquez: "When I get back to the pits we don't talk about my arm but about how to improve the Honda"

"At Jerez and Portimao I worked to adapt the bike to the new riding position, looking for different ones, but then I can't ride the way I want, especially on the right ... However, we have reached a point now, where when I return to the garage we don't talk any more about my arm, but the bike. We have to be patient. Riding is good for me, even if I don't ride at my level. In this way I don’t lose speed and contact with the competition. Of course, at the moment my performance is not my usual one, but it will be better in the future”.

“The biggest difference currently is the mentality: at Jerez when I went back to the pits we talked about my arm, here we discuss what I need on the bike. I am aware that I have limits and where I have them I don't push anymore, but otherwise I’m doing like in 2019 and I just try to get the best out of my Honda. We will improve in the future and if the shoulder does not improve the results will never improve, but if we work in a different way we will never improve”.

Marc Marquez means that right now the priority is to make the RC213-V progress. And that he is fully confident that nature, as far as he is concerned, will allow him to get back in shape. To be the Marquez he was before…

Marquez: "Now the bike moves half as much, but only because I don't push it to the limit"

“Compared to 2019 or 2020, the tyres are basically the same. I have always said that the Honda is a critical bike and you crash and lose confidence with it. What is happening to me now is that I'm not at one hundred percent. Sure, now the bike moves half as much… but because I don’t take it to the limit. I'm not prepared for that. It's true: we have traction problems, but there were also those in 2019. The difference is that I can’t adapt right now "

Recently, Marc revealed that after the Jerez Grand Prix in Honda there was also talk of him not racing. Is that still an option? The answer of the eight-time world champion is that of a sportsman who knows that only competition gives you the right stimuli to return to your level.

Marquez: "How I finish the season doesn't matter: I'm just training while I race"

"It is a fact that for me racing for 5 points or a single point does not change the result at the end of the year: fourth, fifth or seventh does not change anything. I race to win. It is a transition year. Instead, we need to understand where I come from and where I'm going: I have to avoid crashes, but I have to behave as if I were in a public …test, in the race: it's the only way. A football player can train by going to a small field to kick the ball a couple of times, but a MotoGP rider, if he wants to ride the bike, must necessarily race".

Pol Espargarò, his teammate, has spoken of common technical problems, and that he was happy that finally all the Honda riders are riding the same bike. So now the data can be shared. But speaking with Marquez, it is clear that the path that 'Magic' is following is different.

"I honestly don't know what the others are riding: I have an RC213-V, let's call it 'evolution'. When I feel good and a new component convinces me, they introduce it, they update the bike for 2021. I try all the new components, one by one. It is the only way to truly understand".