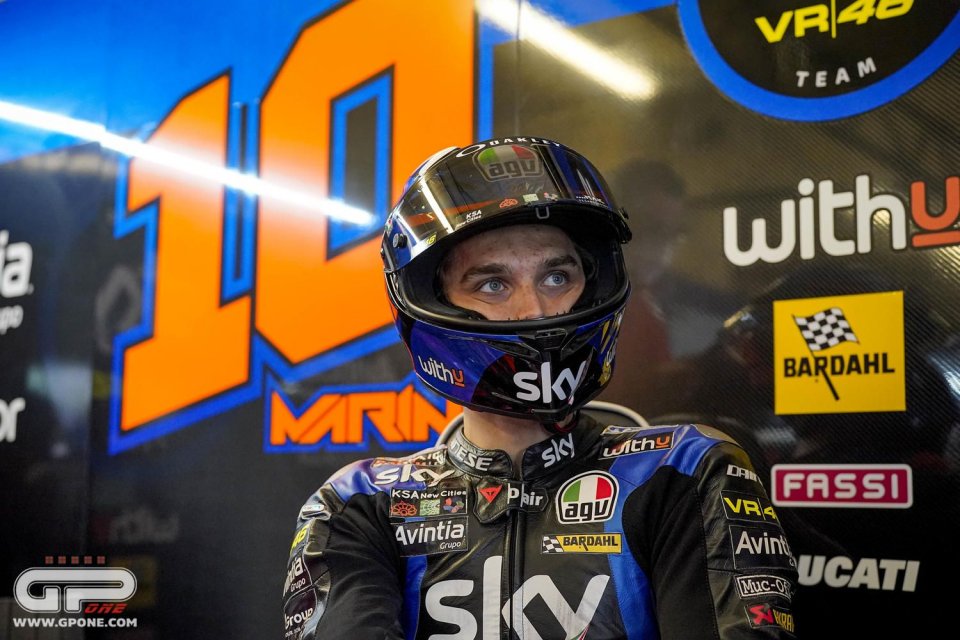 The first day of the Italian Grand Prix weekend has come to an end for Luca Marini. The Sky VR46 rider finished in 17th position in the combined free practice times classification. His best lap today was the one he set in FP2 in the afternoon in 1’47.154, just over a second away from the best time of Pecco Bagnaia.

“Like every Friday it was a difficult day, especially in FP1 - said Marini - It is always impressive to go onto a new track with a MotoGP bike, because all the benchmarks change even compared to when I rode with the Panigale. I had expected to be up at the front, I was hoping to be able to do the time attack already in FP2 but I lost some time with several riders. With the soft on the rear I felt very comfortable. In general I am satisfied with the work. I changed the set-up a little and the rear part of the bike a little. "

What were your impressions when you found yourself on the track on a MotoGP bike?

“Honestly, during the first lap I followed a lot of the other riders. I saw that everyone closed the throttle and they were very careful, especially with the body. As a result, I did the same. After the first lap I started pushing more and more. It wasn't easy, but if you find the right trajectory and manage to maintain the right position throughout the entire lap, the bike doesn't move as much. Often you lose the rear, the key is to try not to move the bike too much or it becomes a disaster. It is also scary! You have to stay focused on your body position. Often, if the bike moves a lot, it is difficult to use the brake pedal, you have to think about it in every lap”.

Today was the hottest day since the start of the season. Did the bike react differently in high temperatures?

“Not particularly. Track grip changes a bit and how the tyres work. My bike, in high temperatures, works very well. It is more strenuous from a physical point of view. The bike gets very hot and the heat from the engine can be felt a lot on the straight. The temperature so far has been good, I'm more worried about when we are in Malaysia or Thailand, it will be more critical there”.

With the MotoGP, what is your favourite point on the track and what is the point where you are most in difficulty?

"The best point is always the Arrabbiata 1 due to the layout of the track. You enter the corners very hard and then you go uphill so you accelerate very hard. The tyres have a lot of grip in that part and you can feel the slope of the track on your body as well. At that point I am already very strong. Compared to Pecco, I lose some time in the first braking area. Then I lose a lot at the exit of Biondetti 2, then turn 14. That corner changes a lot compared to the Moto2 because you do it in a very strong way. On the exit, since there is now also a new piece of asphalt, you have to open the throttle to 100% and try to get the rear of the bike out slightly and put it a little sideways. Getting it up again isn't easy. You need to get used to it a bit, certainly the most experienced riders make the difference there ”.

What sort of weather are you hoping for and how do you reckon you can do tomorrow?

“In my opinion, tomorrow the rider who takes pole will also set the new track record since 2019, even if Marc then did a great lap in Dovizioso’s slipstream. It won't be easy to beat, but I'm sure that with the tyres which have improved it can be done. The asphalt has deteriorated a bit since last year seeing as there was also the Formula 1 race. Tomorrow, to be happy, I would like to lap in 1’46.500 even though it is not going to be easy. I think it's a feasible goal for tomorrow, if something better comes then so be it. I always try to remain realistic, we will see how the weekend evolves".