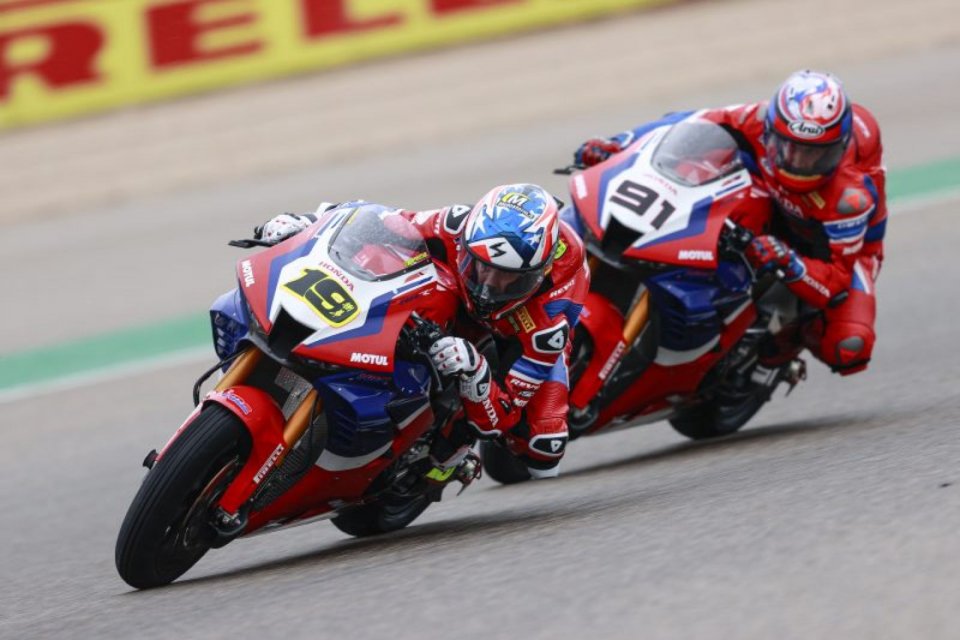 It was a not exactly exceptional Sunday for Team HRC Honda. Looking to make amends for the crash in the final stages of the opening race of the new season, today Alvaro Bautista could go no better than a seventh position as best result. At the same circuit where last year he scored his very first podium with the Tokyo manufacturer, the rain was the protagonist at MotorLand Aragon, which influenced the choices of Pirelli tires in both today's races.

“In the Superpole race we opted for rain tyres and when the track started to dry out the riders who had chosen intermediates or slicks clearly had different pace – said the Spaniard – In the end we ended up seventh, but I had good feeling with the bike in conditions where we have struggled in the past, and that means we’ve taken a step forward in that respect.”

In Race 2, on the other hand, the rider from Talavera took advantage of the opportunity to become familiar with the intermediate tyres. Nevertheless, as the laps went by he suffered an electronic problem, similar to what happened the previous day, so much so that he took the chequered flag in eleventh position, 35 seconds behind the winner.

“The track was wetter than in the morning and we opted for intermediates, but the asphalt dried quickly during the race. It was the first time I was using these tyres and with a setting that was a bit of a mix, I wasn’t perfectly comfortable. Then, towards the middle of the race I started to have the same electric problem as yesterday and kept struggling to change gear. I had to manage the situation, riding very carefully to avoid taking any risks. It's a shame, because without this problem yesterday we would have been fighting for the podium, and at least for the top six today. Having said that, we have to stay focused on the positive things, on the fact that we have worked very well on the set-up, the geometry, the suspension, and also the electronics. This gives me a lot of positive energy for next weekend at Estoril.”

Haslam: "Unfortunately I crashed in Race 2"

Things went worse for his teammate, Leon Haslam, who was never really competitive over the weekend in Spain. While in Race 1 he brought home an eighth place, today he was unable to achieve the pace shown in the wet warm-up of the morning.

“The Superpole race did not go well unfortunately, after what was a positive warm-up – said the Englishman - One of the issues was that we should have gone with the intermediate, but we also struggled a bit with throttle delivery. So a difficult race in which I took some risks on several occasions.”

In almost identical conditions, the following race saw Leon crash out at turn 2, ruining the comeback he was putting into place in the early stages.

“In the final race we went with the intermediate solution, as did most riders, and the pace felt really good. I felt that we resolved the power delivery, as well as a few other things, it was only unfortunate that I then crashed. So even though the results overall have not been what we wanted, I do feel that we were able to make a good step in this final race, and I’m really looking forward to seeing what we can do next weekend at Estoril” he concluded.