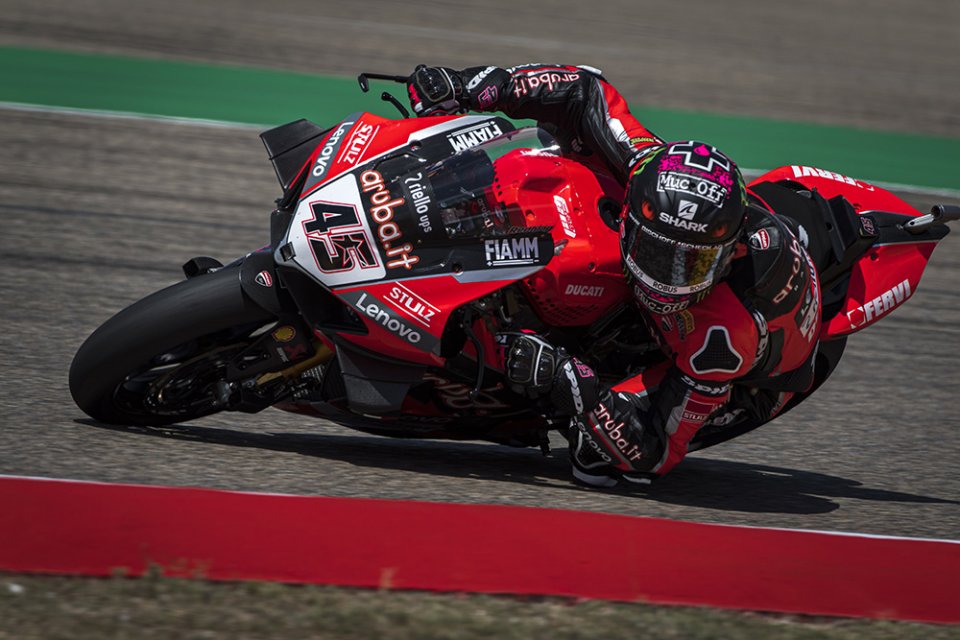 Scott Redding didn’t expect such a difficult start to the season. Not only was he unable to keep up with Rea for even one lap, but he wasn't even able to fight for the podium. A fourth place is simply a disappointment, and the British rider knows what was causing it.

“Honestly, I had no grip,” he said as he threw up his arms. “From what I knew, the Kawasakis were supposed to use the SCXs for the rear but, on the grid, I saw that Johnny had the SC0s, and it seemed like they had more grip. I did what I could. The tire slipped. I couldn’t stop the bike. I had no rear grip, and then I started to struggle with the front too. I tried to pick up my pace, to save what could be saved, when the other riders also had a decline and reached my level. I continued to struggle, but I tried to catch up to those who preceded me. But, with two and a half laps to go,  my tires were totally worn. If there had been another lap, I might have pulled out. I actually had no more tires, and that had never happened to me with the Pirellis.”

Was the situation that critical?
“In the end, it was like using medium tires. It’s really strange. I had no grip in entering. When I’d lean the bike without using the brakes, I’d lose the rear. It wasn’t fun, but I didn’t give up. The last chicane was usually my strong point, but it became my weak one. The bike was sliding a lot. Usually, on the longest straight, we manage to catch up with the others, thanks to the power of the Ducati, but I couldn’t accelerate.”

Have you talked to Pirelli’s technicians?
“Yes, but what do think we’ll get from them? I used the SC0s, and it was done with three laps to go. I didn’t have another option.”

Davies complained about Ducati’s lack of commitment to the SBK.
“I feel they’re trying. They do a lot. Kawasaki only participates in this championship. Ducati races in the MotoGP and the SBK. We’re second, and you can totally see that. But, in the tests, they have new material. Chaz has been here longer than I have, and I don’t know what happened, but they’re working on improving the bike. I’m happy, but I’m a bit confused, because last year’s strong points have become weak ones.”

Could the experience in the MotoGP help somehow?
“There’s communication for development. They work in the same direction and talk to each other, but the tires and brakes are very different, and that makes a big difference.”

What do you expect for tomorrow?
“We’ll see. If it gets cold, we’ll change everything while, with the heat, we have a package that can be competitive. I think we can do it. Yesterday things happened that I didn’t expect while, this morning, I found my bike again. Then, before the race, the temperature rose by ten degrees, and the problems started. To win a championship, you can’t have such a big difference. I think we just have to sit down and figure out what to do to make things right.”