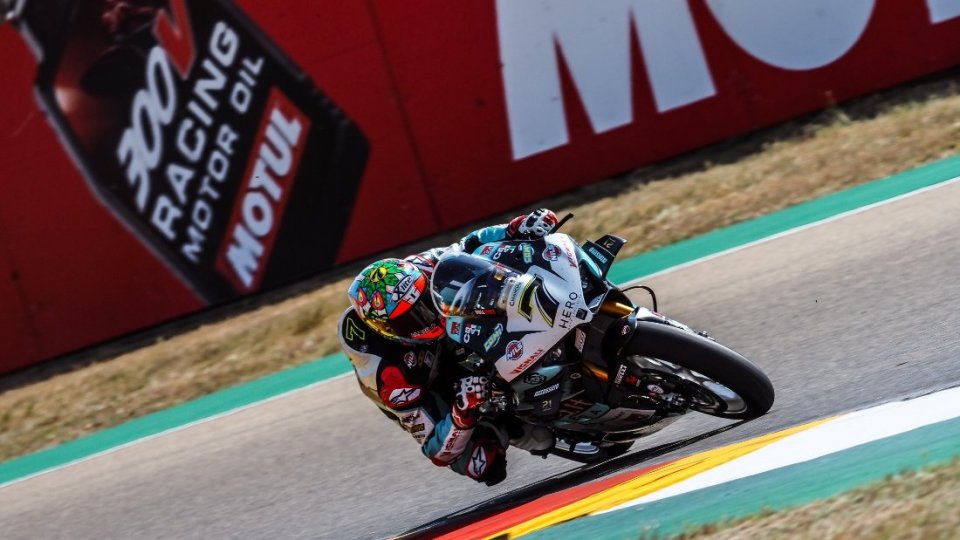 Chaz Davies finished fifth in Race 1 at Aragon. The GO Eleven team rider, best independent rider of the day, was not satisfied with a last place. In fact, Chaz openly declared that he was aiming for the podium today, but that he also couldn’t reach this goal because of the tires and the bike. He was also slightly controversial towards Ducati.
“The choice of tire was not an easy decision to make,” Davies began. “In the end, I thought that, with the rise in temperature, I could gradually get in the game. Unfortunately, I had a huge drop in the last few laps on the left side. When I got back up to Toprak, I felt pretty good and thought I could handle some problems. I believed I could do it and that, if I had a chance to pass, I’d be able to finish on the podium. With three laps to go. I suffered a really big drop and in my position, where I was already struggling. I started to have even more problems. I didn’t have grip and stability on the left side and, basically, I decided to take home some points by finishing in that position.”

What do you think of Ducati’s choices. None of the bikes were on the podium today. What are your ideas for the rest of the season?
“To be honest, I thought we would definitely be on the podium here. It seems that others have worked very hard and in different areas. Yes, we may have been left behind, but it’s nothing new. We’ll need to discuss this with Ducati to understand what kind of change to make.”

Do you think the engineers will be able to solve the problems you have on the bike?
“Yes, I have a lot of faith in this.”

Is that the problem? You’re not getting enough help now?
“That’s  a question you should ask someone else. I think you know that it’s very difficult and that I’m working hard. Honestly, I haven’t seen progress this winter. It’s difficult to say that we have everything we need when we actually still have nothing new since the end of last year.”

Is there a relationship between the successes that are being achieved in MotoGP and your 5th place today?
“I don’t think we get much in this paddock to be able to make progress. We don't have attention equal to fifty percent, also because it wouldn’t be possible.”

Did you choose the wrong tire or would you have had this pace anyway?
“It would be easy now to say that I made the wrong decision. I put the SC0 on well and, last year, I was quite convinced of the choice. Maybe it wasn’t the right one today. It depends on you, but also on the bike. In my opinion, it’s not just the SC0. Like we saw today, Scott Redding also struggled in some moments in the race. I think each compound had its pros and cons. I don’t think there was a better choice today than the other. Neither was perfect. It would be interesting to know how it would have gone with a different tire.”