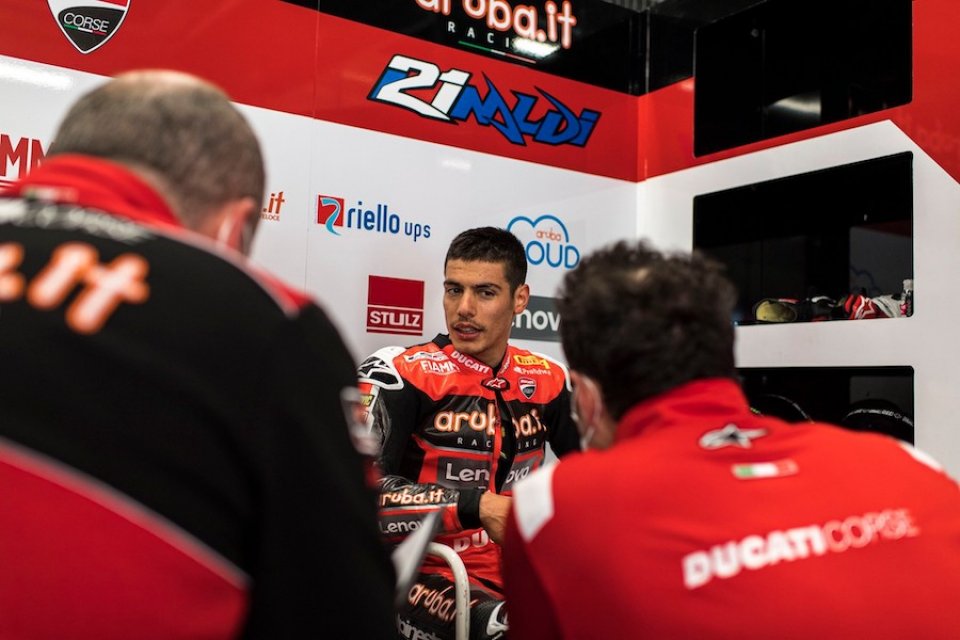 It was the first day of a race weekend as a factory rider for Michael Ruben Rinaldi who today on the Aragon track wore red Ducati Aruba leathers on the V4-R. Actually Michael seems to have been an official rider for some time since the winter has been very long, what differences has he noticed in recent months between a small satellite team and a factory team?

"Regarding the winter break, I felt a lot of changes, I did a lot of days of testing unlike in previous years when there was not enough budget for the satellite teams. I realized that Ducati never stops working and this makes me proud, every now and then I go to the factory to see the work they do there and this motivates me a lot. Obviously this is something different between a factory team and a small team, there are so many people working. Every year everyone improves and the teams are reaching the maximum level and perhaps the margin between satellite and official is closing but when you are in a team like the one I am in now you have to be professional "

Rinaldi's first day in Aruba, however, was quite complicated with a sixth position in the overall standings. How did your day go?

“I would say that, for the first day, it was quite positive because, although I had some problems, I was able to manage my schedule while staying calm. I'm taking some good things away from this Friday even though I'm definitely not the fastest, but I know why. During the tests my sensations were much better, it is certainly something related to the temperature and in fact I think I can be much faster than I was today. Now I have to solve the problems I have, we have all seen in the data that there is something wrong. But this is exactly what makes me happy: I am sixth without having had any wonderful sensations and so I can only improve ”.

Last year here at Aragon you won in race 1 bringing home a really solid weekend, are there the bases for a repeat performance?

“I have to say it was really strange today because we worked with a real problem, I didn't feel much power and we need to understand why. I have my benchmarks in every corner and when I opened the throttle I didn't have the same benchmarks and I lost a lot of time. I hope that the engineers can solve the situation for tomorrow and if they do I will definitely be part of the game ”.