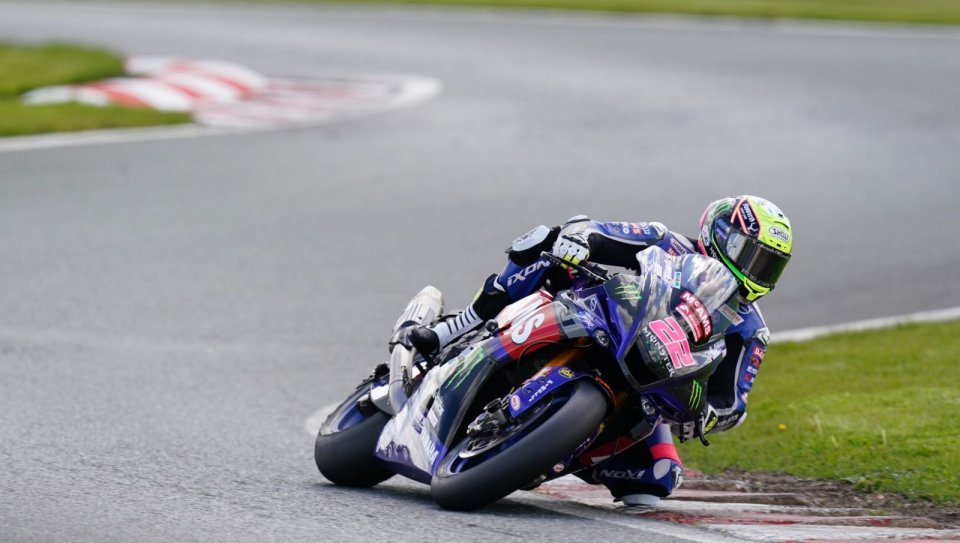 One single day characterized by three sessions of one hour each, which translates into an important test bench for the inaugural round of the British Superbike season on the same track scheduled for the weekend of 26-27 June. There are numerous points of interest, starting with the benchmark times obtained with the highly anticipated Pirelli SCX spec tyre, the return (finally ..) of the public to the grandstands in the UK, as well as the values ​​expressed on track with close gaps and a top 4 made up of four different brands. So, the third part of the "BSB Test Tour 2021" at Oulton Park ended under the sign of Jason O'Halloran (in the cover photo) with Tommy Bridewell and Ryan Vickers in excellent shape.

After dominating the tests held on the Silverstone 'National' layout - Snetterton a chapter apart due to the bad weather conditions – the McAMS Yamaha rider seems to enjoy the air of the Cheshire circuit: pole position and double win last year, best time today. Already competitive in the two opening sessions, in the last one available O'Halloran first set an interesting 1'34.961, adding to that with a 1'34.581 with the use of the "super soft" compound at the rear, reiterating the good performance shown in the previous exits.

Bridewell in good shape, steps forward for the Ninja ZX-10R 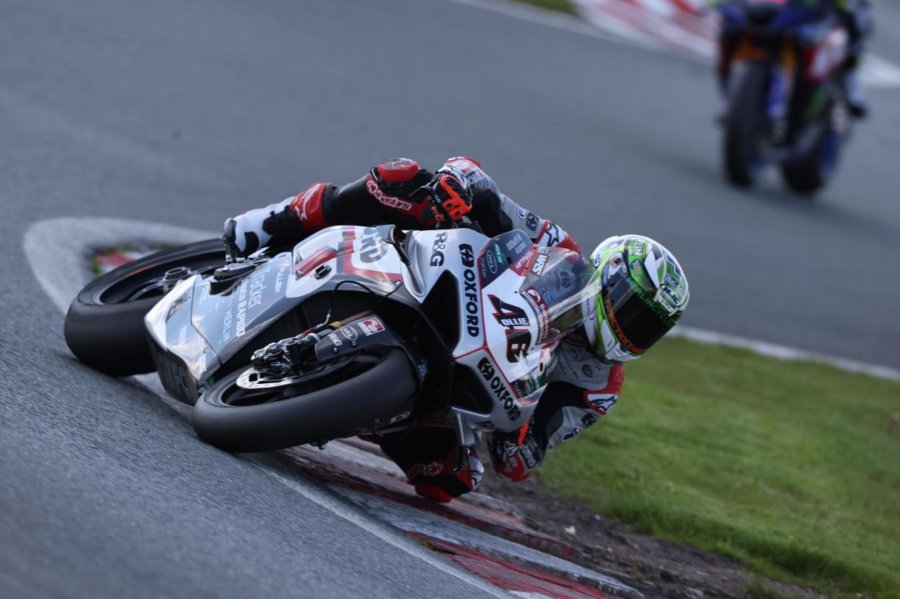 In session 3 the overwhelming majority of the group tried the definitive "time attack", including Tommy Bridewell (above). The Oxford Racing MotoRapido man continued the work of fine-tuning the Borgo Panigale four-cylinder (especially in terms of grip), taking home today's second position just 37 thousandths from the Australian's time. However, in front of the 4,000 fans present, third place for youngster Ryan Vickers (RAF Regular & Reserve) was the real surprise of the day, after even heading session 2, as he was able to exploit the potential of the 2021 spec Ninja ZX-10R in a track with more congenial characteristics. 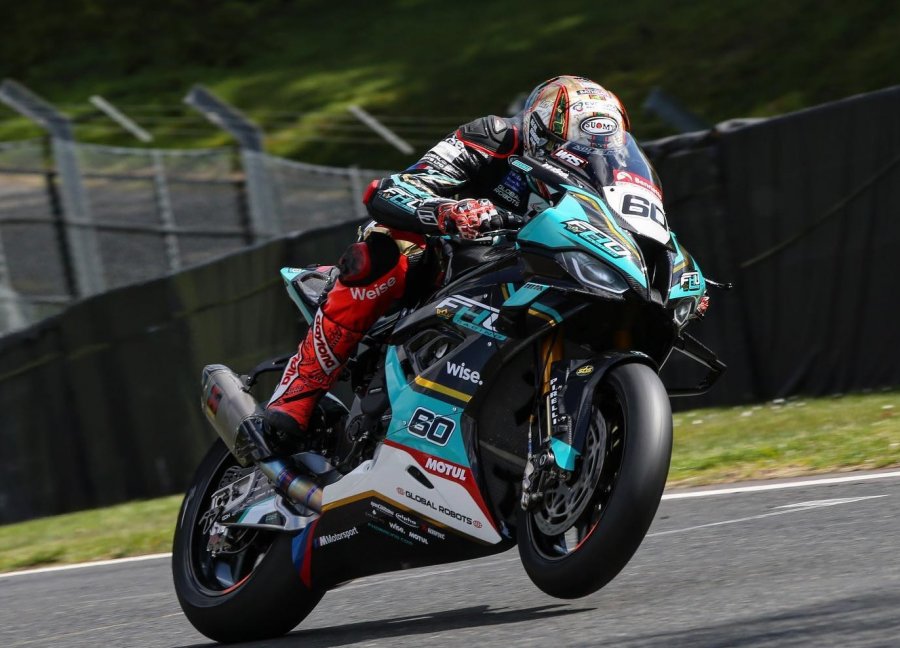 Speaking of latest-spec motorcycles, the development of the M1000RR is continuing incessantly, with positive feedback on the performance front. In this sense, fourth place for Peter Hickman (FHO Racing, above) in 1'34.854, eighth and ninth of the Rich Energy OMG Racing duo composed of Kyle Ryde (victim of a harmless slide at Island Bend while he was in the lead in the third session) and Bradley Ray (back again after his forced stop), as well as tenth for Danny Buchan (SYNETIQ BMW by TAS) all demonstrate the progress being made. In the middle of these protagonists can be found Josh Brookes (VisionTrack PBM Ducati), fifth and leader of session 1, ahead of Gino Rea (Buildbase Suzuki) and Glenn Irwin (Honda Racing UK), all in just 839 thousandths. All this is the result of a technical regulation capable of equalizing the performance of the various bikes.

The BSB protagonists will return to action on 8 June at Donington Park 'National', the final part of the "BSB Test Tour 2021". Teams and riders will have about three weeks to fully recover their energy and analyse the accumulated data. One man who hopes to return is undoubtedly Takumi Takahashi (Honda Racing UK), who crashed at Druids dislocating his left shoulder. 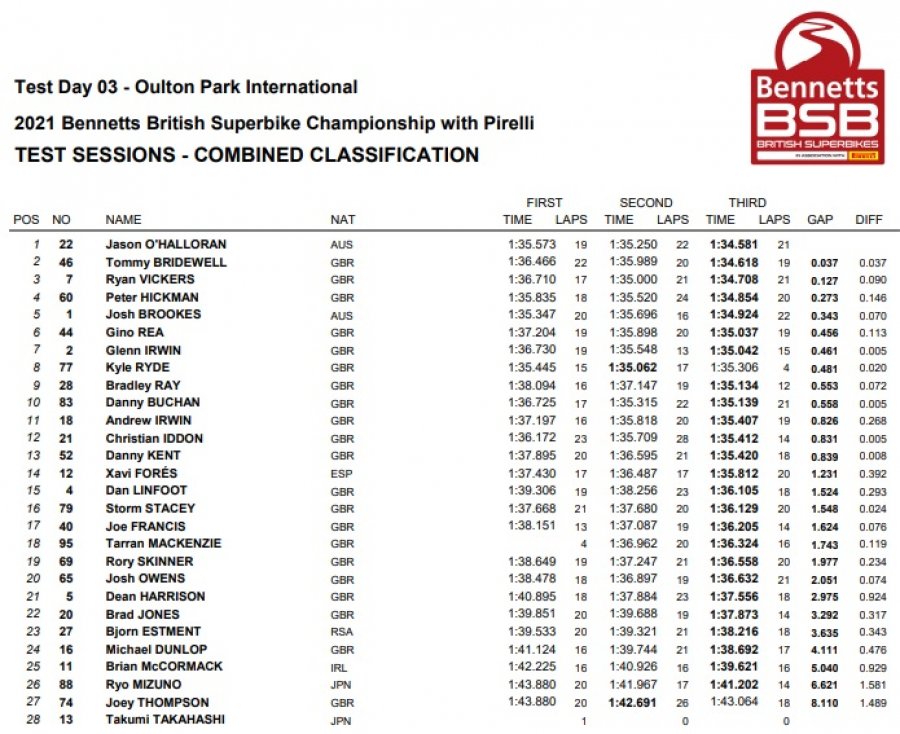