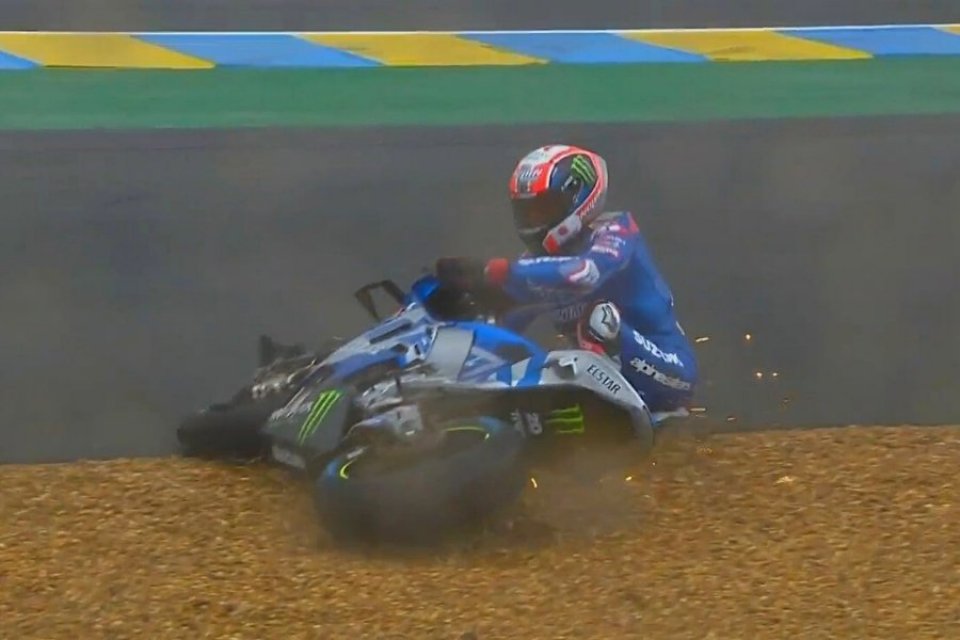 Alex Rins’ weekend in Le Mans ended with a kick in the air (see video at the end of the article). Suzuki’s Spanish rider is having a decidedly negative time, so much so that today is his third consecutive zero after Portimao and Jerez. All the falls that led to this meager booty happened  when Alex was demonstrating that he could fight it out for the podium, only to slip up in the thick of it.
“I’m not sure what to say today,” a disconsolate Alex Rins said during his interview. “The heavy rain was a real misfortune because, like I told my team yesterday, in dry conditions, I would have been on the podium today.”

At one point, the important positions were really just a few tenths apart. What happened?
“I made a perfect start. I was fifteenth on the grid and ended up fourth shortly after. When it started raining, we all risked a lot then, after the bike change, I braked at turn four, where you don’t brake usually, and I lost the front. It was a real shame.”

Either way, your race didn’t end at that moment.
“Exactly. I came back and changed the bike again by mounting the medium and the soft, but I struggled to warm them up and felt the bike was too aggressive, and I fell again.”

With a guide like Davide Brivio in the garage, would anything have changed?
“It’s hard to say. I have to apologize to the team because this is the year when I feel at my best with the bike, but it’s not going well. Suzuki has improved a lot, but we’re making so many stupid mistakes. Today I was really doing the impossible.”

Today is the third zero in a row due to falls. Why do you slip so much in the race?
“Yes, that’s right, I fall a lot. It seems like I’m making up for all the falls not made in the past few years. I’m working very hard and will try to improve, but I honestly don’t know how to answer this question. I think these moments happen every now and then.”

How difficult is a time like this, with all these falls, from a mental point of view?
“It’s quite complicated right now to see guys on the team not happy. We’re having a difficult time, and it’s time to start from scratch and try to get to Mugello as best as we can. That’s all I can do now.”

Rins: "When you are going through hell... keep going!"

Alex Rins: We have something new for Mugello that I can’t reveal.”