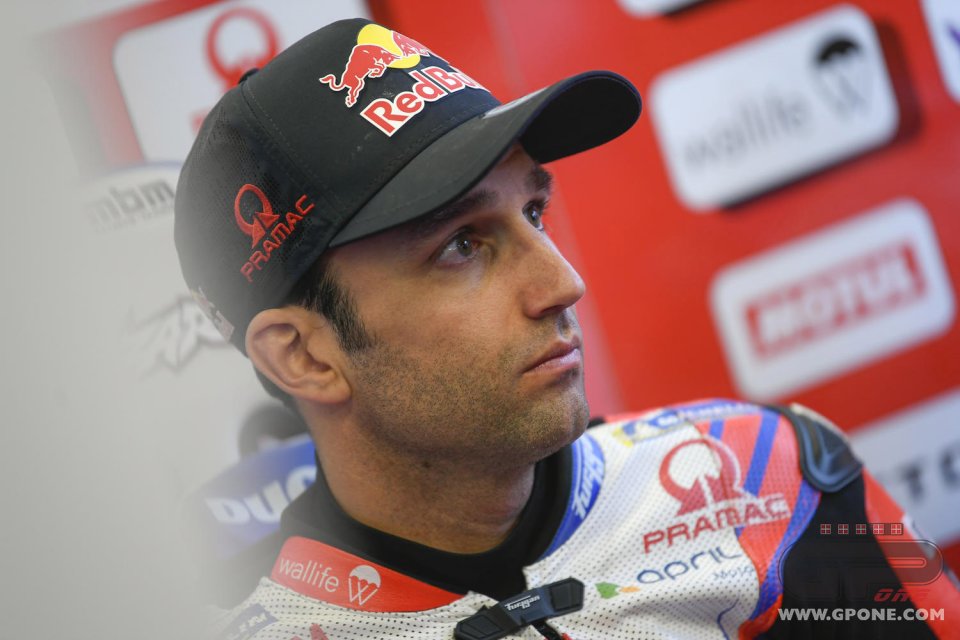 Johann Zarco was the protagonist of a great race at Le Mans, giving rise to a magnificent recovery after changing bikes in the pits and climbing up to a second position that relaunches him in the overall standings. The Ducati Pramac rider could also have won today, but in any case he can be considered more than satisfied with this result.

In the post-race media conference Zarco was relaxed and above all gave the impression that he is fully aware of his own potential and of the more than concrete possibility of being able to fight for the title until the end of the season given the level shown in these first five races of 2021.

"It is perfect to be here on the podium - declared Zarco - I was leading the world championship after Qatar, and I think I have enough experience to fight for the title. I feel very good on this Ducati, the bike is really good and the team is too. I feel I have this Ducati more and more under control, so I think that going forward in the season it is really possible to stay in the fight for the title. These twenty points are therefore excellent. I made a mistake in Portimao, but I didn’t feel at my best. In Jerez it was important to score points, I feel that the Ducati has enormous potential, I have been saying this for months. We have done two double wins at Jerez and here, all the Ducatis are becoming very fast and this gives us a boost for the rest of the season ".

Can you tell us about your race?

"At the start I avoided Franco, then I had some problems and lost other positions. I would have stopped on the first lap to change bikes, but nobody stopped so I stayed on the track too. Then on the second lap it was raining heavily, so my goal was to bring the bike back to the pits in one piece. I returned to the track in fifth position and found myself struggling for the first time with a wind that had never been there all weekend. The track was a bit different. In any case I had lost too much time from Miller and Quartararo and it is a shame because I could have won. In any case I am happy with this second place, I had fun on the bike and also in the comeback I had a lot of fun in the race. When I saw Fabio he was far away, but I knew I could catch him. I thought I could win, but there wasn't enough time. I’m happy with today's twenty points. "

Zarco: "I lost too much time with Morbidelli at the start, I would have won"

Did you use the holeshot device at the start?

"I didn't use the holeshot, because I thought about it a lot but in the warm up lap I realized that I had to manage the situation well. I chose a good line, but I found Morbidelli ahead of me coming out wide and this created some problems for me. I lost some positions, but at least I avoided hitting Franco. I think that was the moment when I lost too much time. I didn't try the device, and the start was really different than usual. But it wasn't because I didn’t use it that I lost time. The two medium rain tyres are the tyres that give you more consistency. I chose them thinking about the possibility of winning. Only that they came into temperature too late, and I lost some time getting out of the pits . In any case, I had chosen them for their consistency, and it was not the wrong decision ".

Would it have been different without rain?

"Today we were lucky to have the rain, because Quartararo would have run away on a dry track. He was impressive even in the wet, he has improved a lot. When you are fighting for the title you have to be fast everywhere, and this day means a lot to him. Jack, I and also Pecco, we have to be ready to fight in any conditions. We have scored a lot of points on these five tracks. The next tracks give us great chances to win in the dry and fight with Fabio. They are two good tracks to be for fighting for the championship for us ".

A podium at Le Mans is special for you…

"Sharing this podium with Fabio is nice, but I must say that in Qatar it was even better. We are happy because he won in Qatar, but I found myself the leader of the world championship. Here it is the opposite, but we are both happy. It went well for everyone. In the winter we had to handle a lot of pressure and I think it also gave us an extra boost for both of us to be strong. "

Do you think there will be team orders in Ducati at the end of the season?

"It's too early to talk about that. I think that given the excellent relationship between me, Jack and Pecco, if any of us were to fight for the title against Quartararo, for example, maybe we will think about it. But these thoughts we will only have towards the last two races at the most. A lot of things can happen and at the moment it is better to see the possibility of all three of us fighting at the end of the season ".

You enjoyed the Flag To Flag race?

"When things go like this and you finish second it's okay! But there is actually a lot of stress in a Flag To Flag race. Intermittent rain is difficult to manage, you can have big differences in the results even independently from you. I tried not to take too many risks at the beginning, but it went well ".

This is the first time there have been two or more rookies on pole position in a single premier class season since 2006 with Dani Pedrosa, Chris...
3 hours 24 min ago

The video circulating on the web reveals a disconcerting episode in the Moto3 paddock. Tom: “I kept quiet because I wanted to keep my ride. That’s...
1 day 2 hours ago

The calendar for next year has been set and will be made public today. After Kazakhstan, another country enters the World Championship.
2 days 3 hours ago