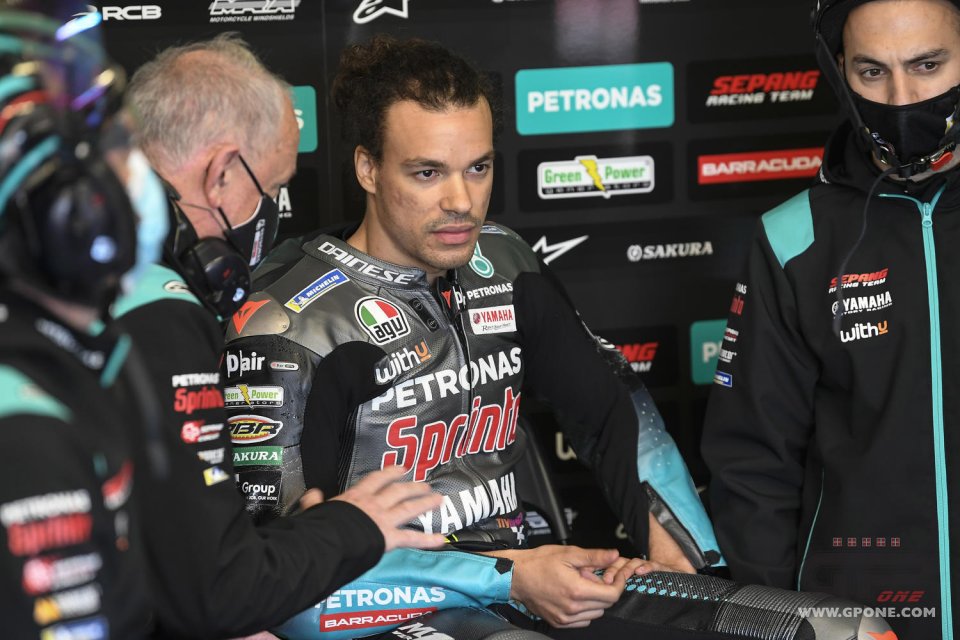 Franco Morbidelli had a bad day today. His race virtually came to an end in the first lap, when Pol Espargarò deceived him with a slightly over-the-top move, causing him to make an error. After trying to keep the bike upright in the gravel, Franco fell over heavily hitting his already injured leg and leading to fears that he might have aggravated the situation.

Franco actually then got back up and brought his M1 back to the pits to change to the second bike and try to finish the race perhaps picking up a few points.

"I had the accident during the dry part of the race - explained Morbidelli - I touched Pol Espargarò and went off the track. I was unable to control the bike in the gravel, I fell and again hurt my knee which is not already OK. When I saw it was raining, I thought I'd bring the bike back to the pits to try and at least finish the race. I knew there would be a lot of crashes, so I thought I could make some  points. There were several crashes, but not enough I would say. I came close to the points, but I didn't get any. It was a tough race, now I have to rest, try and recover as much as possible from this small injury to get to Mugello in perfect shape. "

Was it all Pol’s responsibility then?

"I think the responsibility is mutual. When I saw that Pol made that little mistake, I thought he would go out. I got in position to pass him, I was faster than him and I thought that after that problem he would be wide. But he was actually immediately very aggressive, he let go of the brakes to try to pass Valentino. I hit him on the rear and I went off the track. This is the accident as I see it. At that moment I was also a bit scared, because there was a certain difference in speed between him and me and it's always dangerous. These are dangerous moments, but these are the races. "

Was he too aggressive?

“Pol's entry was sudden, a lot. But it cannot be called an error and it cannot be defined as a dangerous manoeuvre. It can only be called a very aggressive manoeuvre and that's what caught me off guard. "

When you fell it looked like you hurt yourself again…

"The pain is severe but only for a short period of time. I sat down for a moment, breathed and quickly regained my strength. I realized it was raining, so I decided to get back into the race. It's the meniscus and a ligament that are damaged, let’s say they’re not perfect. "

Will you have to operate?

"At the moment an operation is out of the question. We have actually been in the operating 'zone' for a long time, but this type of injury can be stemmed by doing a great job on the muscle part and that's what we want to do. I would like to avoid this operation, so I will try to work as much as possible. If I should decide I want to not have any kind of problem, I will have to opt for a nice little operation, an idea that does not appeal to me at all ".

Do you at least go away with something good from this weekend?

"From this weekend I take away a nice improvement in the wet and I'm happy with that. I was fast even in the dry, so that's okay."