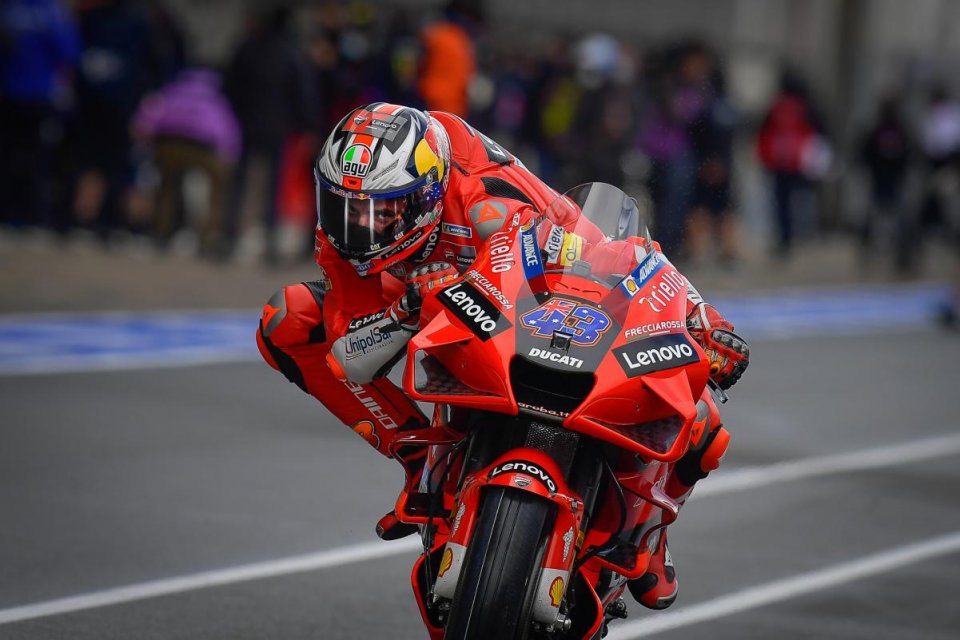 Jack Miller held the Ducati flag high on Saturday at Le Mans. In the final minutes, the Australian rider managed to pull out a win and a third time trial, pushing Franco Morbidelli out of his third spot on the grid.

On a day where Bagnaia was unable to get into the Q1, Jack confirmed his potential, remaining with the best.

“The sun came out shortly before the Q2, so we decided to keep a dry set-up for one of the two bikes. I went out first with wet tires, but I immediately noticed that the track was almost dry, so I came back as quickly as possible to change bikes. I tried to use the slick tire, even though the track was wet at the end of the Q1,” he began, “In the first stint, I had Fabio behind me but, at turn two, I lost the front, since I was still on dry tires. In fact, I was struggling to find the right temperature with the tire but, above all, a decent line to follow, since there were dry sections and some wet ones. Then the situation improved, so much so that there was good grip.”

But one thing is certain: Le Mans is putting all the riders to the test.
“In the FP3, I tried to do a race simulation, feeling really confident in braking. Then, unfortunately, I fell because I was trying to figure out how to reach the limit. I’ve been working, looking ahead to the race this morning, reaching the limit to understand the level. That fall was a clear indication of how difficult this track is.”

Meanwhile, Quartararo’s Yamaha is in pole.
“The Yamahas certainly have a good pace, and I think they can continue at this level. The problem is trying to get the tire up to temperature, even if the Michelin’s wear in the race doesn’t worry me. Starting up front is definitely important because, in the beginning, you don’t get all the splashes of the bikes in front of you on your helmet. The race? When it’s wet, I’m confident. I have to stay cool and watch my wrist on the gas.”

Yet, there are a quite a few variables and Miller is aware of them.
“Throughout the weekend, we’ve never found a round with the same conditions. Today, the conditions were mixed in the FP4, but I tried to stay on track as much as possible ,in order to understand how the bike reacted, given that the weather here is unpredictable, and you have to be prepared. I didn’t make any particular changes for the race, so medium tires for wet and soft for dry. We worked hard with the team, and I’m ready for any condition.”

Among the many variables, there’s also the wind.
“It’s difficult with the wind, even more so than with the rain, because you don’t know where it blows, and it’s unpredictable. You might find it in front of you in some sections, in others, it’s lateral.”