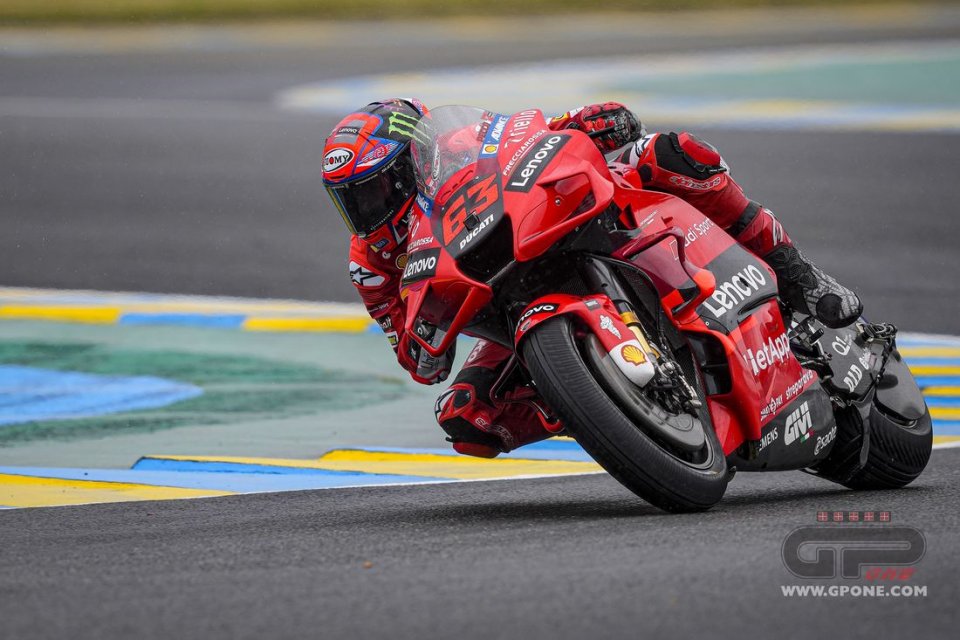 It cannot be said that Bagnaia likes predictable races. After his terrific comeback in Portimao, today at Le Mans he staged another one: 16th on the grid, 19th after two laps and finally 4th at the finish. It was a great feat, but one that did not allow him to keep the lead of the World Championship, which has gone once again to Quartararo, with just a one-point advantage.

"It was a very long race but also fun - commented Pecco - Of course I am a little worried about finishing 4th, but all in all I lost only 3 points to Fabio and I am quite satisfied".

How was your first flag-to-flag race?

“Fun, but above all the bike swap saved me. On the dry one, with which I started, there was something wrong, I think the clutch. I had already had some strange sensations on Friday, but we didn't know what it was when we didn't do many laps in the dry. So I prayed that it would start raining ”.

And your wish was granted…

"Yes, it's a pity that I then made a mistake entering the pit lane at 3 km/h more than what was allowed and had to take two Long Lap Penalties. However, in the wet I knew I was feeling good, in the end I had some luck in this crazy race. I'm happy because last year I was struggling in these conditions and I can only be happy ”.

Is there a secret to your comebacks?

“In Moto3 I did some very big ones, because the Mahindra was not very performing in qualifying, while in Moto2 never. With the Ducati I can do it and it is nice, but I was happier in Portimao, because it is more difficult in the dry. "

However, starting from the front would give you a better chance of winning ...

“It is something I think about and we are working to make sure that it doesn't happen that I start so far behind, these races are definitely a lesson for me. Here, however, I was unlucky: in FP2 I found a tyre that wasn’t good, in FP3 it was raining and in qualifying there were difficult conditions. The important thing, when certain things happen, is to be able to react and still finish in the top 5. Today went great, I felt great. I know that Jack won with two penalties, like me, but I'm happy ”.

What is it like to have such a tough teammate? Wouldn't a Bottas be better?

“Bottas isn't there to finish second either, but Hamilton is the strongest of all. I'm happy to have Jack as my teammate, because he pushes me to improve, and also that there are many Ducatis up front. It is a stimulus and also allows you to compare your data, it makes everything easier. On the track, then, we are all rivals, there are 21 riders to beat ”.

Quartararo is now leading the championship, but you are only one point behind…

“I’m still not used to being in these positions in MotoGP. It's nice to be there in front even after such a weekend, I feel good with both the bike and the team, but I’m not really thinking about the title. I think things will begin to take shape only after Misano ”.