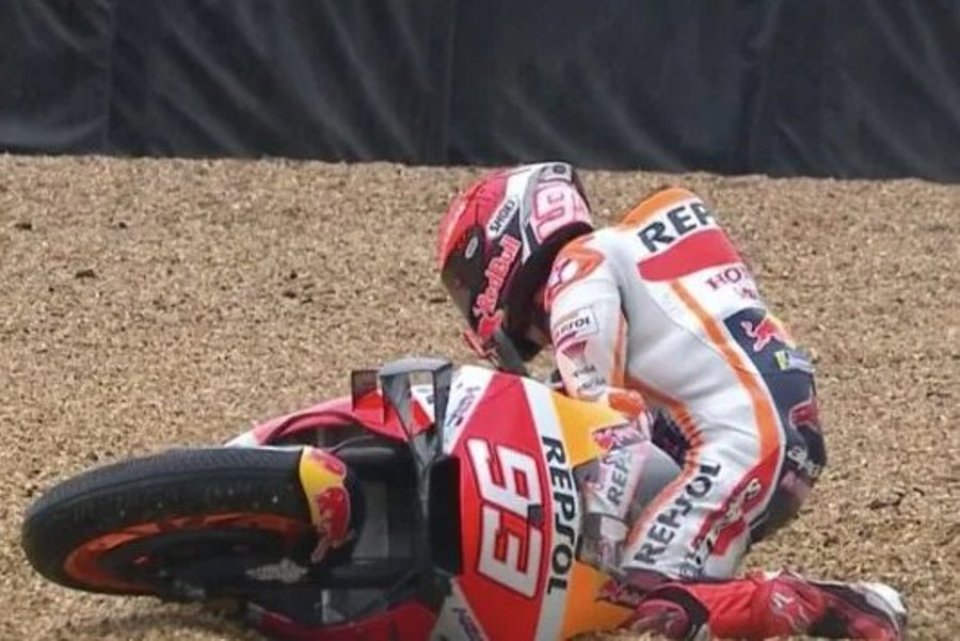 The anger and disappointment are plain to see and Le Mans left a bad taste in Marc Marquez's mouth. The Spaniard was victim of not one, but two crashes in a crazy French GP. First the highside at the last corner when he was leading the race, then the crash when he was busy making a super comeback.

At the Bugatti circuit, Magic Marc's ambitions ended up in the gravel, leaving the #93 with a bitter pill to swallow for what seemed to be, in all respects, a great opportunity to score an amazing result.

“What can I say, I'm angry about how this race ended - Marc began - with the rain I had a few more chances to do a good GP, but at the same time also to finish on the ground. After doing the flag to flag I had good sensations, even if the bike tended to slide a lot. When I crashed for the first time, I was warming up the tyres, I was on the wet and ended up on the ground. This is something that can happen, as many other riders crashed as well. On the other hand, I am angry with the second crash because I was pushing a lot and I was not 100% focused. In fact, I was thinking about the possibility of returning to the pits to use the dry tyres, as well as about my body and in the end I crashed. I had to manage the race better and I didn't ".

As he himself pointed out, he is really angry about what happened.

“Up until this morning I had a good weekend, but in the end this wasn't a good GP for me. All the Hondas crashed and I was not good. I risked more than I had to when I didn't have to risk and at the same time I also did the opposite, that is manage, when I could have done more. Unfortunately I did not manage the race as I should have done and unfortunately that’s the way it went. The mentality is the same as always, we are not 100%, so we need to improve ”.

So Marc Marquez leaves Le Mans with zero points, the first time this season that the #93 has not even picked up one point.

“Unfortunately we threw away a good opportunity, as I was able to be fast and competitive in the wet, so much so that I was in command of the race when I crashed for the first time. The fact is that compared to Jerez and Portimao, this was a more difficult race to manage. In the previous two, you immediately reached the limit and then you knew how to control the situation. Here, on the other hand, you never know what the limit is in these conditions. But apart from that, today I have to criticize myself, because I felt good on the bike, I could ride it and I could have achieved a great result. Instead it didn't happen, since I wasn't able to take advantage of it ”.

The eight-time world champion did not mince his words. In the meantime, looking at the world standings, he is 64 points away from the top slot.

"As I have already said, I don’t think about the possibility of fighting for the world title, regardless of whether I won or simply finished on the podium or in the top five today. I have to work, because at the moment I am not yet at 100% and so I have to make progress. Today, in dry conditions, the best had already gone away from me, while in the wet I was able to find the right sensations. This is what I take home from this GP ".

One of the key topics at this GP was the flag to flag. In fact, we saw Marc and Quartararo come in together to the pits for the change.

"I went alongside him because before the last corner he hadn't accelerated and you gain almost half a second there. Then once I changed the bike I managed to overtake him at the restart, doing more or less like in F1 ”.

Now it’s off to Mugello…

“Unfortunately I have to keep working. I have come from a long period of inactivity and I have to reach the top of my physical shape. Today did not go in the right direction, also because I miss races like this”.