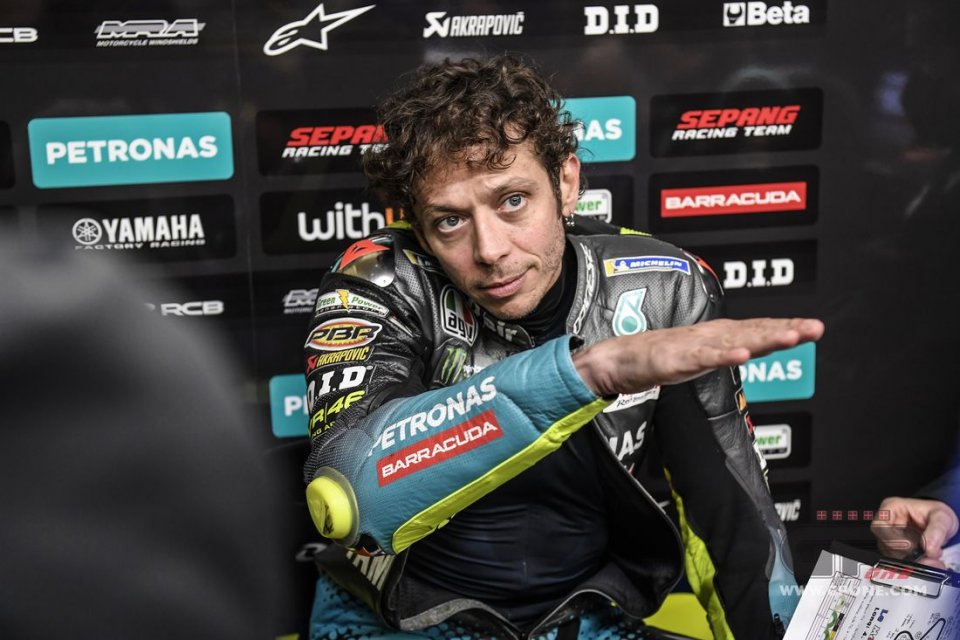 There is no doubt that this weekend for Valentino is going much better than the last ones and ninth place in qualifying, despite not being a particularly exciting result, is a much better starting point than what he was used to in previous GPs. The Doctor, however, knows that it would be a mistake  to claim victory too soon.

"In the end, it is the results that count - he stressed - In Jerez, in Monday's tests, I did a bit better, I was faster both on the pace and in the flying lap. Here at Le Mans I have almost always been in the top 10, I have entered directly into Q2 and will start from the third row, so I have taken a step forward. But I would like to do more, fight for even better positions. We are working well in the garage, there is a good atmosphere, but we still have a lot to do ".

So you have to build on these foundations…

"I'm definitely going better than the last few races, my pace is not bad, especially in the dry - he explained - In the wet, instead, I wasn't very fast in FP3, yesterday I was faster, but today all the Yamahas struggled. We seem to have some problems in acceleration, but we didn't understand well”.

Luckily, the asphalt was dry in qualifying and Rossi, as well as his team-mate Morbidelli, was the first to use slick tyres right from the green light.

“Today the weather was incredible, every 15 minutes it started raining and then stopped - he said - Luckily we found a dry window for Q2. Idalio Gavira, my coach, saw it right and told me to go out with slicks. However, when I was going strong on the second lap, I got the bike out of line at the last corner, a matter of 5 centimetres and I found myself on a wet patch. I lost a bit of confidence in the last sector, I was a bit too conservative at that point. I don't think stopping to put on a new tyre would have helped, it was better to stay on track and gain confidence ”.

Tomorrow, for the race, the biggest opponent will be the weather conditions…

"Even in normal conditions it is difficult to push a MotoGP bike to the limit, but sometimes it is scary - explained Rossi - You happen to be on the dry and to arrive at a point on the track where it is raining, you have to be lucky to slow down quickly. The point is that the race will last 40 minutes and today in 40 minutes the conditions changed at least 3 times ”.

Not to mention the cold…

"Michelin says that the tyres start working when it is 20° on the asphalt, then 15 or 14 in the air, but these days we have never reached those temperatures: so it is always dangerous - he ironized - It also seems as if we are in Malaysia, because it rains very hard for 5 minutes and then stops, water and cold are the worst combination. I don't know if moving the GP by two weeks would be better. In case of the flag to flag, you have to be careful in the first laps with the slicks with the wet track, because they have a fairly stiff carcass ”.

Finally, Valentino wanted to congratulate his brother Marini, who will start right behind him tomorrow.

“He was very good - he commented - Yesterday he rode for the first time in MotoGP in the wet and he wasn't very fast, but the Michelin rain tyres have a lot of grip and it's not easy to get used to them. I thought it would take longer, but already this morning he set a good time and was fast in qualifying. He is doing what he has to do, learn, Luca is a very intelligent rider and he will be able to give us a lot of satisfaction in the future ”.

Jarvis: “Yamaha’s history with Valentino Rossi was a fairytale”