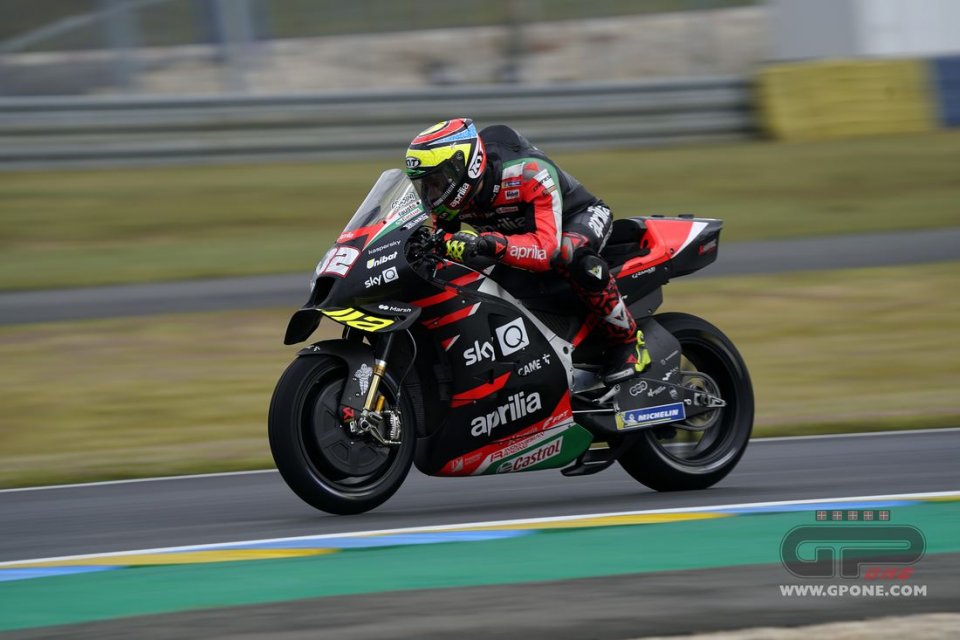 Lorenzo Savadori knew he had a good chance in the wet, but when he crashed on the first lap of Q1 everything seemed hopelessly compromised. Fortune would have it that the scene of his crash was near the pit lane and so Lorenzo turned into a runner. "At a certain point I lowered the visor so that you couldn’t see how much I was struggling, too bad it was transparent" he joked.

The run, however, did not tire him out too much and he finished Q1 in first place…

“What did I think when I saw my name in front of everyone? It was cool! - he smiled - I am happy because Aprilia has always given me a big hand and believed in me, so being first with them is nice. We should do it more often”.

Why are you going so fast in the wet?

“Honestly, I don't like racing in the rain, but in those conditions the MotoGP bike becomes more like an SBK, because it moves around more. I came up through a different path than the other rookies, I have always and only raced with production-derived bikes, apart from 125s, but it's been a long time. I have never even tried a Moto2 and the stock-derived bikes are less rigid, they move around a lot, so I got used to that. When you ride a MotoGP bike, or in any case a prototype, you have to change your style, because it is much more rigid. To succeed, however, it takes time, because the level is very high ".

Certain results are good for morale, though…

“They are certainly nice, but at this stage, I think the most important thing for me is to do is notch up the mileage. I know I've said that before and I can get boring, but I have to figure out how to ride this bike and start doing it. I would like to win, like all riders, but to do that I still have to grow ”.

How long do you think this path is?

“I find it hard to say, but I think that to have the bike in hand as I would like it would take a year of racing. It's not such a quick thing, also because the level is very high, and I also know I don't have all that time, so I'll try to do it as soon as possible ”.