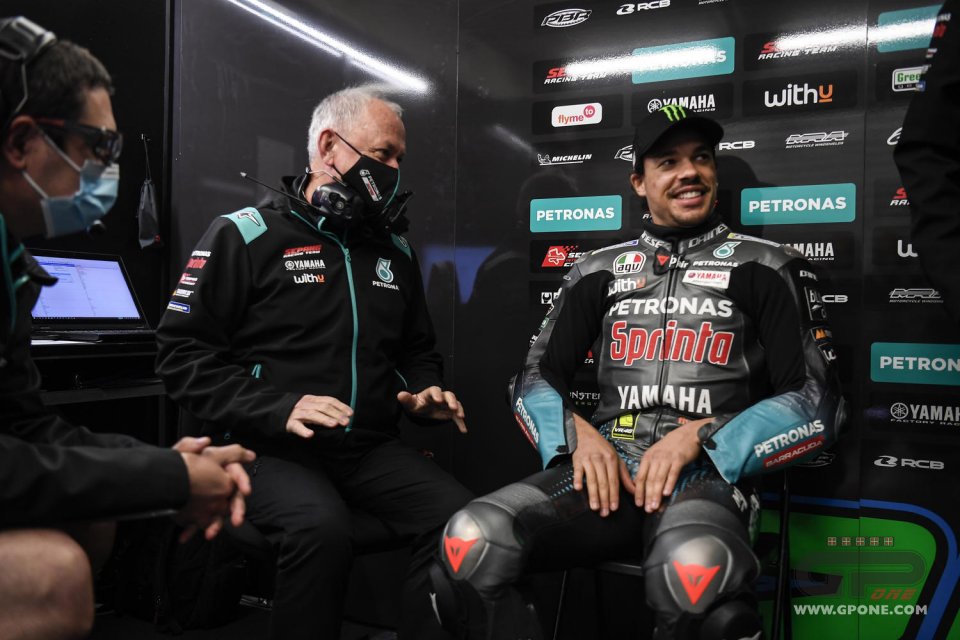 Franco Morbidelli took an excellent fourth position on the starting grid at Le Mans, making full use of the potential of the M1 on the French track, at least in dry conditions. However, the Team Petronas rider had given everyone a bit of a scare at the end of FP3, when in an attempt to simulate a bike change for Flag-To-Flag, he ended up falling onto his second bike outside the pits.

From the images it seemed that his knee had given way suddenly, which raised fears that Morbidelli might find himself forced to abandon the race. The Italian then explained the situation in the briefing with journalists, specifying that he had had a problem in training, when he had in fact slightly injured himself.

"This morning I had a problem with my knee, which was already slightly injured - explained Morbidelli - due to a problem in training, a ‘crash but not a crash’ at the Ranch. I was crashing but I managed to put my leg on the ground and save myself. But now my knee is weak, it hurts since last week. It’s not very stable these days and it gave way on me during the Flag-To-Flag simulation, but we were already working on it in the Clinica Mobile. We had to intensify the work and so I was in shape today, I had no pain and that's good. This evening I'll try to speed up the healing process even more. "

The day, however, ended well…

"I am happy with this fourth position on the grid, we managed to do a great result today again. We are having a good trend from Portimao and this is positive. In any case it was a good day for this second row, which is very important for our bike and overall. I'm happy about it, even though I know that tomorrow will be a tough race, in whatever conditions we have to ride it. I hope not to find half-and-a-half conditions, because there would be too many questions. There is nothing very clear, but I have excellent feelings and I would define it as a positive day ".

Are you worried about this unstable weather?

"I hope there are clear conditions, I really wouldn't like to do a Flag-to-Flag race, both because of what you saw this morning and because in intermediate conditions I'm not that fast."

In FP3 you went fast in the wet, did Forcada's experience on the M1 help you?

"I don't know how much advantage it can be, of course Ramon knows the bike well. But I haven't tried the other bikes, so I don't know how it would go. In the wet I felt better this morning, we made the right changes and with a lot of water I felt good. I still had the good feeling of the first part of the session, so that's okay. Difficult to make a strategy when the conditions change quickly, I try to be ready for anything, then what comes, comes on the track. But it’s important to be ready".

Do you think you have taken a step forward from last season?

"I think I am a better rider than last year, I feel more mature. I try to improve all the aspects in which I am a bit lacking, such as braking which is a situation in which I was not strong last year. But I was in the front and we didn't think about working on it too much, while this year we had to start working on this too to be able to always give our best. My overall impression is that we are better than last year.”

Is victory a mirage?

"I think I can fight for the podium tomorrow, because of the characteristics of the track and for the state of form we are in."