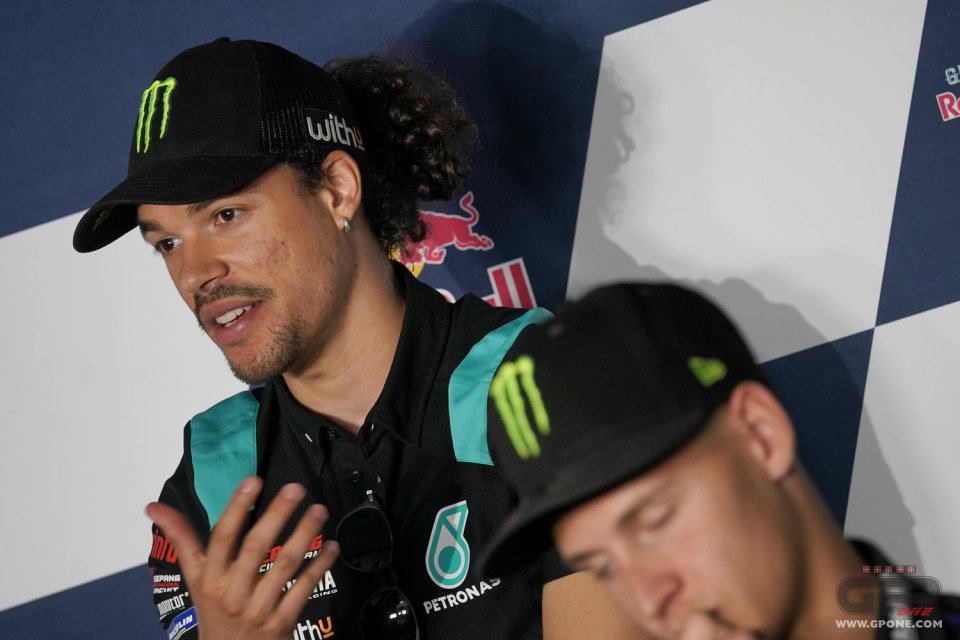 The Franco Morbidelli who attended today's press conference is a concentration of emotions. The Yamaha rider was of few words, as so often happens, but a sort of disappointment is always evident on his face. It’s a feeling linked to a start of the season way below expectations, after having concluded 2020 in a great way. By now his technical situation is well-known and while for most of the time Morbidelli has been making the best of a bad situation, Jerez saw him explode in a series of not exactly kind declarations towards Yamaha, guilty of not giving him a technical package equivalent to that of Rossi, Vinales and Quartararo.

Franco had a drawn face in the conference, he did not shy away from the questions but it is clear that he has to react as soon as possible, perhaps with a good result in France that could relaunch him in the championship and above all give him back a smile that at the moment seems far away. The Jerez podium was a splendid but also a difficult moment, as the rider himself explained.

"A podium in MotoGP is always important and the one in Jerez had a different flavour. I felt good, and after the chequered flag I literally exploded. I think it depends on the emotions I had accumulated and was harbouring and after such a result they all came out together ".

Have your expectations for 2021 changed after this podium?

"My expectations for 2021 were to make a step forward after Qatar 1 and 2. There I realized that I needed to recover if I wanted to fight for the 2020 positions and that's what we did in Portimao and Jerez. Now I just have to continue to work well with my team and have fun in every race, trying to do my best in every Grand Prix. "

Could the rain help given the power gap of your M1?

"Unfortunately I don't think the rain can help me, because I've never been very fast in these conditions. I've never succeeded, I don't know why. I've only had one career podium in the wet and never again. I have to try to work well, I don't know why. I must try and improve and maybe try what we used in the Jerez tests. I don't think the rain can increase my chances. "

Also present in the conference was Fabio Quartararo, who underwent an operation to resolve compartment syndrome in his right arm. Jerez could have been the scene of his third win of the season, while today he finds himself having to follow Bagnaia in the overall standings.

Quartararo: "I only have a few more scars I'll be fine"

"At Jerez it was frustrating because I had the pace to win - declared Quartararo - but I didn't have the strength lap after lap to go forward, brake hard and defend. When I realized that I would suffer in the last laps I thought I would just lose the race, but later I realized it was going to be a struggle to finish the race in the points. It was time for the second operation on my arm. And now I'm fine, I just have a few more scars, that’s all. I can’t wait for tomorrow to arrive to race, I feel good and I think I won’t have any problem riding ".

Could the operation have been avoided maybe with a different training?

"The operation was fundamental and inevitable, because even if you change your training method, you still have to race every two weeks. You don't have time to change your physical morphology in these intervals. In 2019 Mugello was a big problem for my arm and so I chose to have an operation. But it seems that a little everyone has this problem, not all but many riders. I don't know if it depends on the training we do, but it is clearly a widespread problem ".

It might rain all weekend, will it be an advantage for you or a problem?

"I can't wait to try the M1 in the wet. Last year there were very difficult conditions here, especially on Sunday in the race. I feel very good in the dry on this bike, but I want to test it in the wet and I think it can work as well as it did two years ago. I hope to find those feelings again and I know that the whole weekend might be in the rain, so it can be a very important experience for the rest of the season as well. "

Le Mans, Mugello and Barcelona are tracks in favour of Ducati, do you think they can try to make the break in the championship?

"The Ducati riders have good tracks ahead for them, but they are good for Yamaha too. We are at the beginning of the world championship, I don't think these next three races can be decisive, I'm not worried about that."

You have been in MotoGP for three years but have never done a flag-to-flag race. It might happen on Sunday, are you worried?

"For me doing a flag-to-flag would be fun, because I have trained for three years but I have never done it in the races! I expect, or rather I hope it will be drier than wet, but it's okay even if it rains because I have a lot to learn about this M1 in the wet. I'm happy to have these conditions for this weekend. "