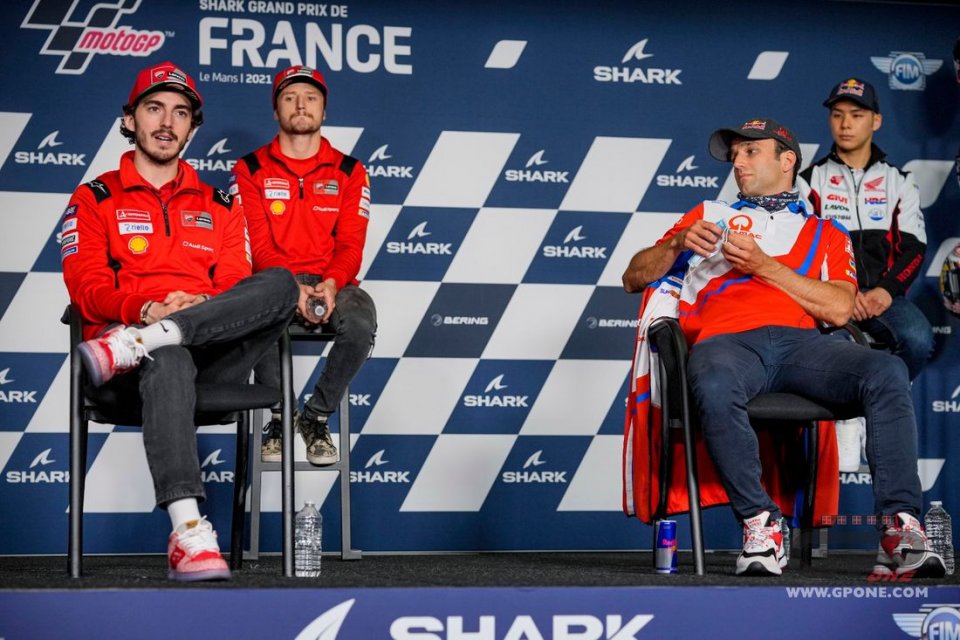 After 4 races, on 3 different circuits, the prize for the best bike goes to Ducati and Yamaha. The Desmosedici has only won one race but has put 4 different riders on the podium, the M1 3 GPs with 2 riders and 3 different on the podium: so the battle is essentially a draw. Now, however, there are circuits that are an ideal hunting ground for the red bikes, starting from Le Mans. It is true that, looking at the statistics, the D16 can only boast last year's victory with Petrucci, but it likes the Bugatti circuit. And its riders are well aware of this.

Bagnaia, Miller and Zarco were the protagonists of the press conference that kicks off the weekend and each one of them has his own cards to play.

Pecco, as usual, is not caught up in emotion: "I have only been the leader of the World Championship for 10 days, I don't give it too much importance - he said carefully - But I like this track, its layout goes well with the Ducati and I come here very prepared ”.

Jack is a bit more confident after his victory at Jerez: "I feel a combination of emotions, a bit of relief and I am even more eager to start. We riders are like that: we always want more ”.

Then there was Johann, who has had a few missteps after a really good start in Qatar, but who knows he can count on the home effect. So it was the Frenchman who expressed the thoughts of many: “It would be really nice to share the podium the three of us on Sunday. With this bike I have already shown that I be stay in front ”.

A 1-2-3 for Borgo Panigale is still missing and now it has the possibility of happening. Not only at Le Mans, because afterwards there are three tracks where it can succeed. After France, there is Mugello and Barcelona, but for the moment the riders have to think about this weekend.

“I think the Desmosedici will be able to go well on all tracks, it also works well with different riding styles” confirmed Bagnaia and his brand mates agreed. Furthermore, even the wet is not so bad news for the Ducati riders, who are aware of how competitive the Desmosedici is in these conditions. Like Miller. If anything, it is Pecco who has more doubts: “I have only done six wet races in my entire career” he recalls. “Being at the front will give him extra motivation” Zarco cuts short.

But between saying and doing, there is a race to do. And a lot of rivals. Because in recent years, at Le Mans the victories have always been shared by Honda and Yamaha, furthermore the Suzukis are dangerous and, with the rain, KTM and Aprilia could be a surprise. Regarding his opponents, Bagnaia does not think Marquez is out of contention: "It's difficult to be out for so many months, for me it was strange to ride already in the tests in Qatar, after the winter break - he said - Marc did a great job in Portimao, but Jerez was a more physical track. Now he has two races behind him and if it is wet it will be better for him. If he starts to go fast, he will be in the fight for the championship ”.

There is no shortage of opponents, that 1-2-3 is indeed a dream but also achievable. Bagnaia, Miller and Zarco left the conference room, hoping to meet again in the same place on Sunday.