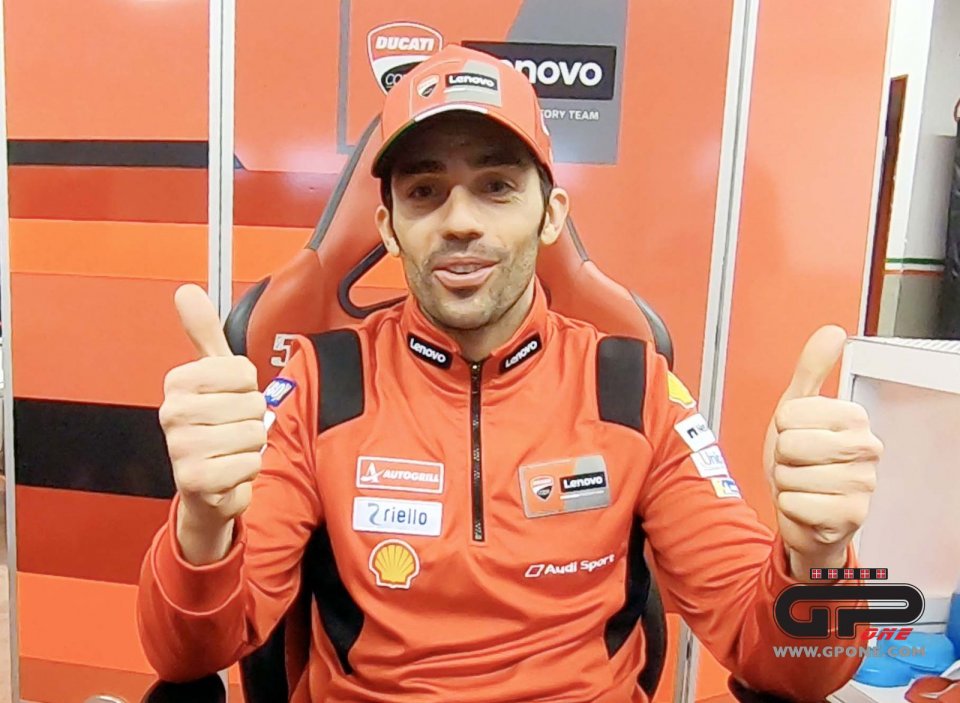 Luck wasn’t on Pirro’s and Dovizioso’s side, as they met up in Mugello for a day of private tests. The rain ruined their work program, and only in the morning did the two find a dry track that allowed them to do a few laps. We talked to Michele in the test team’s garage, while waiting for an improvement in the weather conditions.

What’s it like ending up on the track with Dovizioso as a “colleague”?
“I saw that he didn’t do much this morning. We met for lunch, and he asked me if we could do some laps together,” he said laughing. “It’s a nice situation. I’m glad to see him back on the track, and we’ll be going to dinner together tonight.”

Will you give him some advice?
“He’s a three-time world runner-up in the MotoGP. He’d better give some to me,” he laughed again.

Bagnaia said that this Desmosedici is the best bike there is. How could it be further improved?
“Racing always teaches you a lot, and you must never let your guard down. Even your opponents never stop. We need to improve, and it’s not easy without losing our way. The greatest satisfaction was winning in Jerez. Since I’ve been with Ducati, the only satisfaction on that track was Lorenzo’s first podium. It’s always been a difficult circuit. Getting a double win was a show of strength, and we silenced the skeptics who claimed that our bike only works on certain tracks.”

Now the Desmosedici seems to have overcome the defect of not being able to race. Is it also thanks to the riding style of the younger riders?
“I think the biggest change has been made by the riders, by this new generation, but the bike has also made progress. Certainly, compared to the past, this new situation allows us to work more peacefully, and everyone wants to do well. The young riders put their effort where the bike may have difficulties. But we’re only at the beginning. A difficult season awaits us, and we’ll contend with it at the last races. Starting like this is a good omen, and I think we’re the only constructor to have given the possibility to every rider, with different riding styles, to be competitive. Martin proved his worth, Bastianini is doing well, Marini is fast, Zarco knew he could do well, Jack and Pecco are a confirmation. We have to continue on this path. I’m also testing material for the future. The goal is still far away.”

Three tracks are coming up: Le Mans, Mugello, and Barcelona, where Ducati has historically always done very well.
“There’s nothing taken for granted. In Qatar, we were the favorites. but instead, we got beat, once by Vinales and once by Quartararo. That’s exactly why we have to keep our feet on the ground and not relax. Marquez will arrive, the Yamahas are strong, Mir is always there, Aprilia is fast, KTM will be there, but we’re in the game.”

How is it working with young riders like Bagnaia and Miller?
“In Qatar, we were taking the bus to the circuit, and I realized I was the oldest. I wasn’t that happy,” he laughed. “But it’s nice, because I see myself in their lightheartedness. Then, if you add to this the talent they have, you get a perfect mix. And a passion for Ducati makes a difference.”

There are rumors that the VR46 could become the second independent Ducati team in 2022. Would you let Valentino try this Desmosedici?
“I always tell him to! When I tried his bike I thought... awesome! This is another world. He would have had fun on a bike like this one.  Those were other times. To reach this level, it took us years and many sacrifices, with a group that worked day and night. It would be nice to let him try the bike. Maybe that time will come.”

A prediction: Will Bagnaia win his first race at Le Mans?
“Three favorable tracks are coming up. We’ll see. I believe that Pecco, Jack, and Johann are competitive, and I expect a strong Ducati. I’ll be at Mugello too. We’ll see if I can be as fast as they are.”