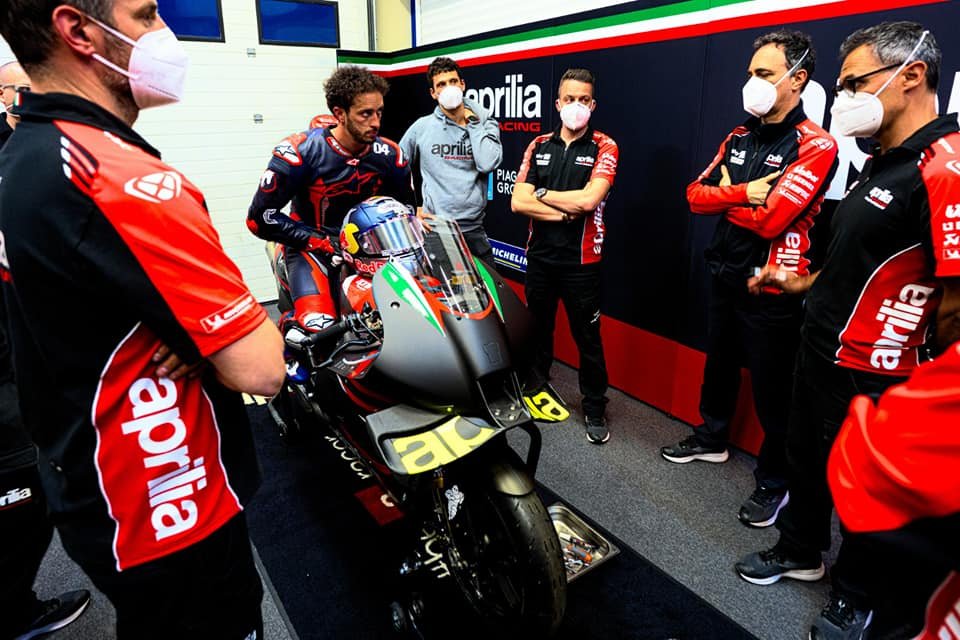 Unfortunately the weather did not allow Dovizioso and Aprilia to get the best out of this first day of testing at Mugello. Andrea was unable to go beyond 25 laps, forced to remain in the garage by the rain. A pity, because at Noale they had worked a lot on the RS-GP (especially on the seat and tank) to adapt it to Dovi's needs, following the requests made after the first contact in Spain.

“We did a big job after Jerez to put him in a position to feel comfortable on the bike - confirmed Romano Albesiano, Aprilia technical director - We did a lot of structural components, bodywork, and this was useful to increase his confidence".

The RS-GP was made to measure by Noale but, as mentioned, the heavens threw a spanner in the works...

"Unfortunately this morning a drizzle in bursts and then the real rain in the afternoon prevented us from bringing home important information – the engineer summed up - Although we did obtain some indications. Let’s hope that tomorrow there will be dry conditions to be able to sort out some things that clearly emerged on this type of track ”.

Albesiano was thinking above all of the high-speed changes of direction, for which Mugello is an important test bed.

"The handling and the ability to invert lean angle are fundamental characteristics on this type of track and points on which we have to work," he explained.

This is why everyone is crossing their fingers hoping that tomorrow the sun will emerge from behind the clouds. However, Dovizioso was able to give some indications.

"Some basic sensations remained similar to those indicated in Jerez - continued Romano - Andrea tried to push a bit but there was no real opportunity. We hope tomorrow to understand something more, as I said today we bring home some information, but it is not very much and there was no real way to work ".

At this point, the possibility of organizing a third test becomes increasingly concrete…

Where would it be?

“I think Misano would be the ideal destination”, he replied.