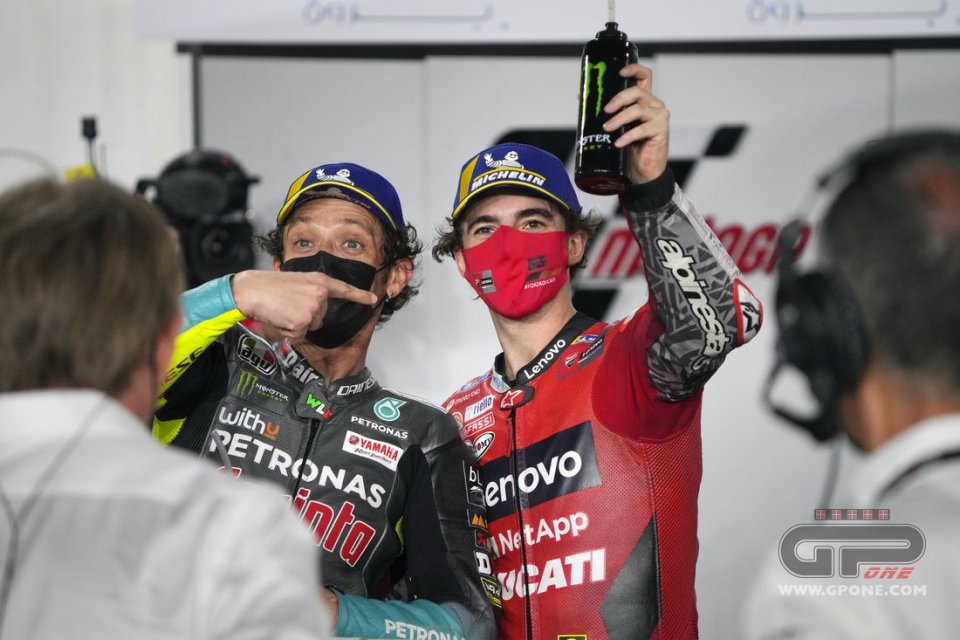 The 2020 MotoGP season had been called one of the craziest in history, with 9 different winners and constant upheavals, in short, a year in which uncertainty was the dominant factor. Contributing to this unpredictability were on the one hand the new Michelin rear tyre, on the other a calendar conditioned by the Covid pandemic, which forced everyone to race in some circuits at different times of the year and sometimes to compete in two GPs on the same track.

It was thought that in 2021 things would return to normal, but after 4 races the twists and turns have not been lacking. Four GPs in which 3 different riders have won (Vinales, Quartararo and Miller) and in which the top of the standings has changed at the end of each race: first the championship leader was Maverick, then Zarco who handed over the baton to Quartararo and finally Bagnaia.

It is always said that after the first European rounds the overall level begins to take shape, so we tried to compare the points scored by the riders in the first 4 races of 2020 with those achieved this season. With the discrimination, let it be said, of different tracks: last year there were 2 races in Jerez, one in Brno and another in Austria, while in 2021 there has been a double-header in Qatar, followed by GPs in Portugal and Jerez . 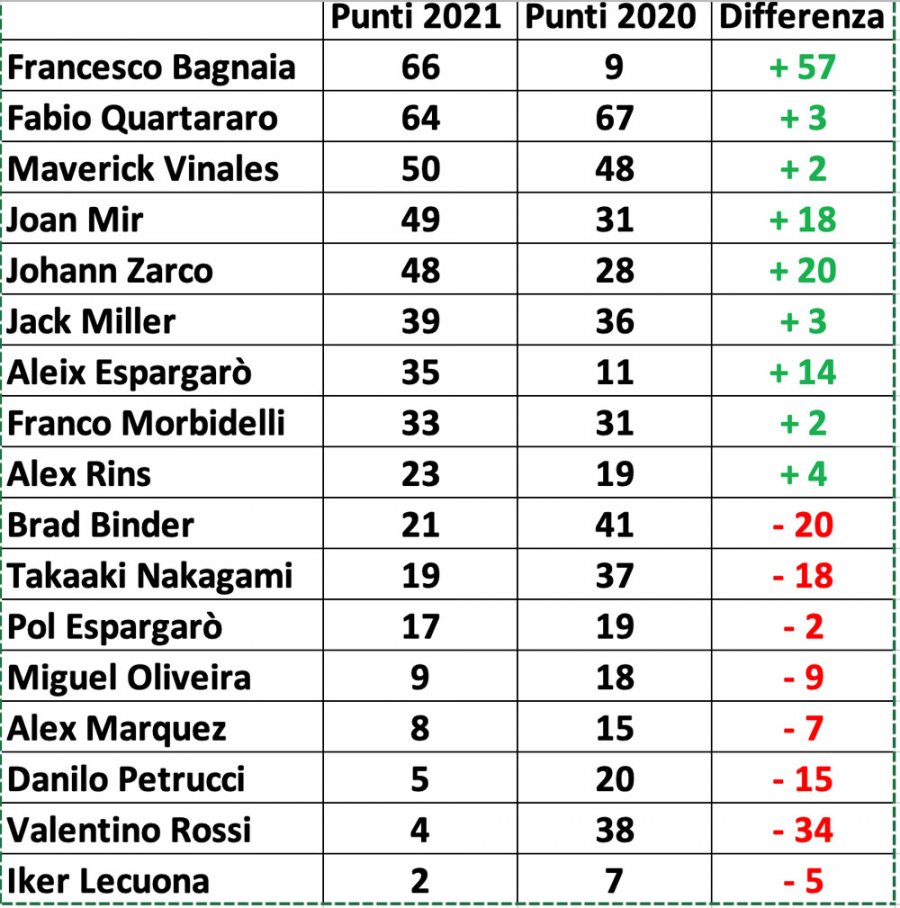 Bagnaia the surprise together with Aprilia, steps forward for Quartararo and Mir

The first fact that catches the eye is Bagnaia’s massive difference in points: 66 against 9, a good 57 more. It is also true that Pecco, in 2020, broke the engine of his Ducati in the second race at Jerez and then got injured in Brno, thus missing two of the first 4 races. Remaining in Borgo Panigale, Zarco is also a surprise, the Frenchman in this first part of the championship already doubling the number of podiums he won throughout last season (2 against 1), but in 2020 he was making his debut on the Desmosedici and with an outdated bike, while now he has a GP21.

From this simple comparison, Aleix Espargarò also stands out, at +14, a sign of how the Aprilia has improved particularly in the winter. However, the Spaniard has also been using his head, no longer making mistakes in the race.

On the Yamaha front, Quartararo and Vinales are positive, but only slightly. For Maverick it is confirmation that he is a fast rider (he already has one victory this year) but that he is still not very consistent, while Fabio has suffered a lot for the problem in his forearm that stopped him last Sunday. Without that physical trouble, he would have been the only man to have always been on the podium (and probably on the top step in Jerez), demonstrating a change in attitude over last year. Instead, what does not deceive is the plus sign in front of the name of Morbidelli, who in 2020 suffered with a mechanical breakdown. For Franco, using the old M1 (dated 2019) is undoubtedly a limit.

It is very interesting to note that Mir has 18 points more than a year ago; for a rider like him who emerges over the distance this is an important tally, which he will be able to exploit during the season. So, woe betide anyone who eliminates Joan from list of title contenders. While Rins cannot be particularly happy with the 4 points advantage over himself in 2020, because last year he had to deal with a shoulder injury.

A trouble shared… brings no fortune: Rossi, Honda and KTM in the rear

Let’s come to the negative notes and the worst ones concern Valentino. A 34 point deficit says it all really about the difficulties that Rossi is facing at the start of the championship. The Doctor has taken home just 4 points (all in the first race in Qatar), while a year ago he also had a podium to his name. It is the symptom of a crisis he is trying to get out of and Le Mans will indicate if last Monday's tests in Jerez were productive.

The lower part of the ranking of this comparison clearly indicates the difficulties of two bikes: the KTM and the Honda. The RC16 was the surprise of 2020, with one victory in Brno (by Binder) and in the fifth race Oliveira scored his at the Red Bull Ring. This year Brad has 20 points less after 4 races, 9 Oliveira and 5 Lecuona. Petrucci, making his debut on the Austrian bike, has only picked up 5 points, 15 less than he had done on the Ducati a year ago, in a not particularly enthusiastic start to the season.

Things are no better for the HRC bike: only in Jerez has Nakagami come close to the podium, but that result was not enough to help improve a negative balance sheet (-18). Alex Marquez is making far too many errors and the result is that he has 7 points less than in his debut season. Pol Espargarò is struggling to adapt to the Honda and the classification is a clear demonstration of this, with 2 points less than in the first 2020 races with the KTM. While in Austria they are rolling up their sleeves with Pedrosa testing all around Europe, in Japan they are churning out a lot of new stuff and hoping that Marc Marquez will be back in shape soon. That's a wild card that can overturn the rankings in no time…